On national security, Obama routinely disregards the rule of law -- and his party remains willfully ignorant 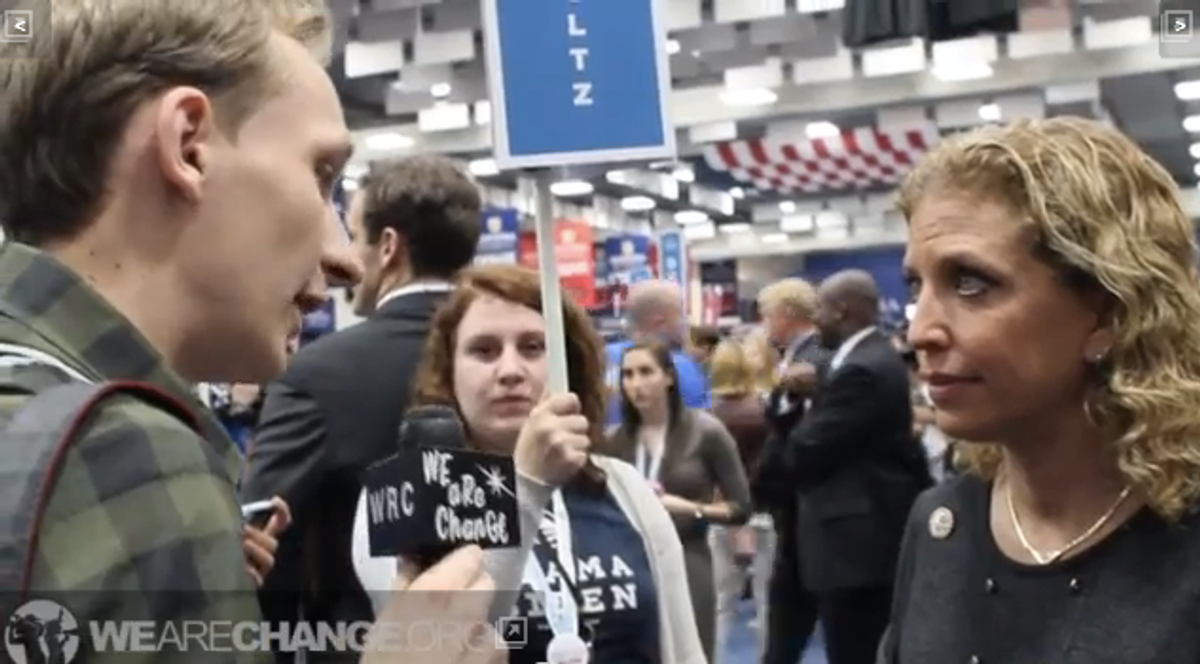 Ignorance is a diverse trait; it comes in many forms and emanates from many different phenomena. There is sheer stupidity: a lack of knowledge of something for which there's no genuine excuse. There's willful ignorance: a head-in-the-sand, nah-nah-nah-can't-hear you aversion to truths, often times in pursuit of plausible deniability. And then there's the most rare form: a bizarre mix of the former two that inadvertently highlights how a deliberately narrow political discourse can make otherwise intelligent people uninformed about what should be the most important political issues.

This kind of bewilderment is arguably the most dangerous when it expresses itself at the highest reaches of the government. Case in point is Democratic National Committee Chairwoman U.S. Rep. Debbie Wasserman Schultz, D-Fla.

In a stunning post-debate interview by the nonprofit We Are Change, and flagged by the Guardian's Glenn Greenwald, Wasserman Schultz is asked a series of direct question about why President Obama now asserts the unprecedented right to execute American citizens without charge, judge, jury or trial. The sequence of responses is revealing.

When first asked about why her party's presidential nominee flip-flopped on indefinite detention provisions in his National Defense Authorization Act, she refuses to answer the question by saying, "I didn't hear that as a subject at the debate." When subsequently asked about President Obama's notorious "kill list," in which he unilaterally executes those (including U.S. citizens) he accuses of terrorism, she insists, "I have no idea what you are talking about," then smiles and says, "I'm happy to answer any serious questions you have." When asked, "Why isn't that serious?" she shuts down the interview by declaring, "Because I have no idea what you are talking about."

Greenwald takes Wasserman Schultz at face value, concluding that even though the "kill list" has been "widely reported and discussed in every major American newspaper since April 2010," the Florida congresswoman nonetheless "does not have the foggiest idea what is happening in the White House, and obviously does not care in the slightest, because the person doing it is part of the party she leads." That's one way to read this incredible exchange; after all, Wasserman Schultz sure does look like an utterly uninformed ignoramus in an episode that, substantively speaking, is way worse than Texas Gov. Rick Perry's (R) infamous "oops" moment (at least Perry admitted his idiocy in real time, whereas the smug Wasserman Schultz had the nerve to get angry at the questioner and try to ridicule him via condescension).

But, there's also an additional way to read this episode: namely, as the predictable result of a political duopoly that so fundamentally agrees on extra-constitutional national security and civil liberties policies, that those policies are no longer permitted to be part of any "serious" national political discussion.

As the DNC chairwoman, Wasserman Schultz plays a key role in marginalizing those issues; that is, her whole job is to stress the differences between the parties and to ignore the similarities in order to win an election. She is, in fact, correct that these issues haven't been "a subject at the debate(s)" -- thanks, in part, to revered partisans like her and former White House chief of staff Rahm Emanuel, who have categorically refused to even acknowledge them as discussion points.

So, sure, while Wasserman Schultz may certainly be stupid, her ignorance is at least in part due to the fact that the political discourse she helps sculpt is willfully ignorant of the substantive questions surrounding national security and civil liberties in general, and extra-judicial assassinations in specific. Put another way, the individual congresswoman may be straight-up dumb, but the national political discussion is, as a system, willfully ignorant of these issues -- so willfully ignorant, in fact, that a DNC chairwoman feels she doesn't even need to know anything about them, much less take them "seriously."

Because of this effective censorship, public opinion has been bizarrely distorted. With Democratic politicians unanimously cheering on Obama's policies, with the party platform being radically revised to embrace Bush-era positions on these terrorism-related issues, and with no major Democratic criticism of their legality or efficacy, polls show the same rank-and-file Democratic voters who previously expressed vehement outrage at more mild Bush administration anti-terrorism policies (torture, indefinite detention, etc.) today largely applaud Obama policies that are even more extreme (undeclared drone wars and extra-judicial executions). Likewise, with Republican politicians silent on these issues, the same polls show strong support for those extra-constitutional policies among the very GOP activists who regularly trumpet their supposed fealty to the Constitution.

For authoritarian and neoconservative propagandists in the establishments of both parties, these numbers represent a "Mission Accomplished" moment -- one loyally reflected in the media coverage, or lack thereof. Case in point, again, is Wasserman Schultz: What should have been a controversial headline-grabbing exchange has been all but ignored by a political media that focuses exclusively on the differences -- rather than the disturbing similarities -- between the parties.

Obviously, with this week's final presidential debate focusing on foreign policy and national security, there's still time for these issues to come up. But with both parties averse to such a discussion, and with a media that defines "news" as only those issues of guaranteed partisan conflict, don't bet on it. More likely, we'll see party spokespeople like Wasserman Schultz in the spin room refusing to address the issues because they weren't "a subject at the debate," pleading ignorance, declaring what is and is not "serious" -- and, of course, laughing off the most critical questions of all.