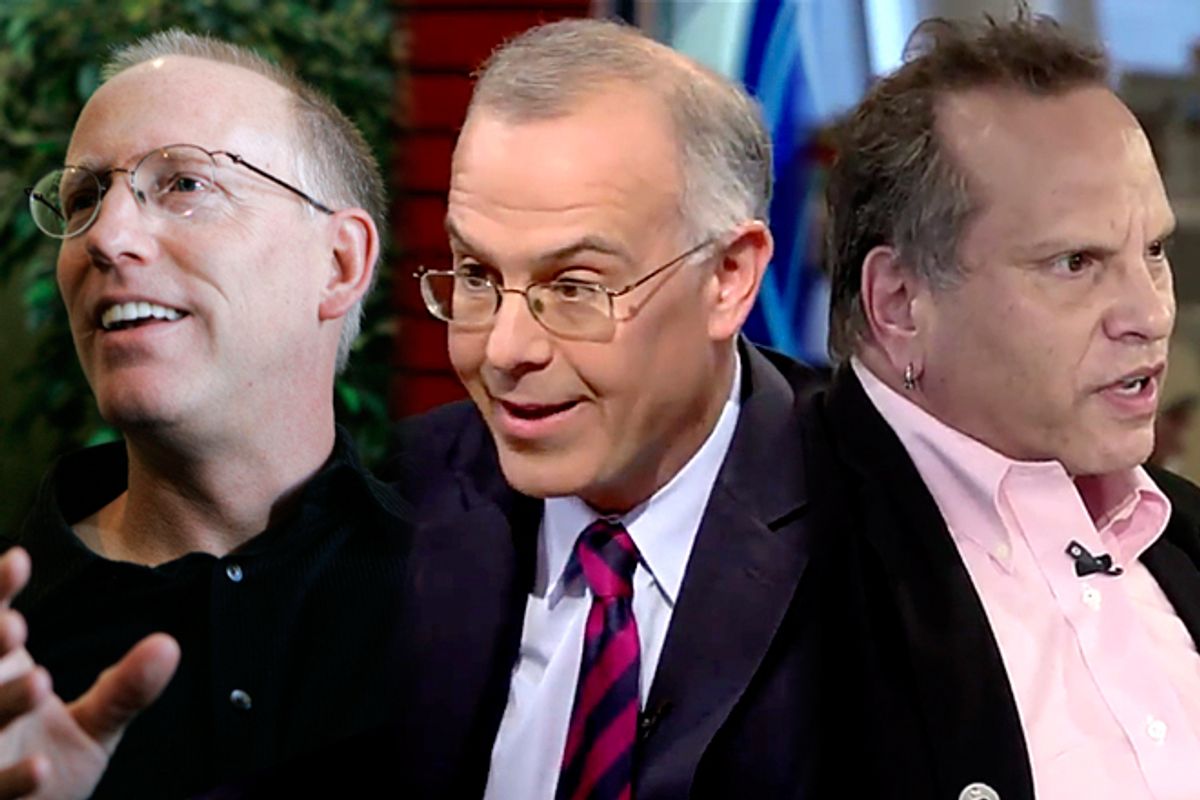 Let's examine the case of four men, who have little in common beyond being very successful and well-off white dudes who recently made public announcements about their thoughts on national politics.

None of these men -- successful and accomplished though they all are! -- actually understand how American politics works. They are all doing it wrong.

Here is a very quick and easy lesson on "deciding who to vote for": If the particular policy or set of policies you care about above all others is actually in the platform of one of the candidates running for office, your choice, on Election Day, should be pretty easy!

Leftists and libertarians are well within their rights not to vote for anyone, if no one running is acceptable to them. If your main cause is a non-interventionist foreign policy, you have no reason to vote for either candidate. (But, like, you shouldn't vote for Romney, because that makes no sense.) If you are opposed to capitalism, or simply the current American form of capitalism, you can cast a pragmatic vote for the liberal -- he'll manage it in a slightly less evil fashion! -- or you can stay home, or you can cast a protest vote for the socialist candidate. Those are all acceptable options, though obviously leftists have been having massive arguments on that particular issue for more than a century.

What wouldn't make sense, if you're opposed to capitalism, is to decide to publicly endorse Mitt Romney. And leftists basically all understand that and that is why Doug Henwood wrote a piece for the Nation on not voting for Barack Obama, not a piece explaining why he's decided to take a chance on Romney/Ryan and he thinks you should too.

But self-declared centrists never seem to get this. They never seem to understand that the logical choice, if you have decided to pick between two candidates, and not to sit the election out, is to support the candidate who supports more of your policy preferences. In fact they quite often think the more noble and wise choice is to pick the man with whom they share almost no priorities.

The Democratic Party, currently, is a moderate liberal party. The Republican Party is a conservative party, with a few (often aging and endangered) exceptions. It would certainly be a noble (albeit probably doomed) goal to announce that you intend to shift the Republican Party to the center (demographics and time are the only things that will actually succeed in shifting the party to the center), with huge piles of money or something, but it does not make sense to reward the current, extant Republican Party and its candidates with your vote and public support unless you actively support conservative policy goals.

So, to take the example of men's rights activist Scott Adams, if Obama's actions on marijuana dispensaries are a deal-breaker -- something you cannot get past in good conscience -- the logical next step is "don't vote or vote for Gary Johnson," not endorse the conservative Republican presidential candidate. The one who is explicitly against medicinal marijuana, and who represents a political party that is, unlike the Democratic Party, not even slightly open to the idea of moderating its position on that issue.

If you are David Brooks, and you actually want there to be a tax on carbon emissions, as Brooks says he does, the logical choice is vote for candidates who support that goal. (Which Brooks did, in 2008, at least! But he won't this year, probably.) It is not Al Gore's fault that conservatives hate Al Gore so much that they refuse to act to prevent catastrophic climate change. Even if Gore's advocacy hardened their opposition, the correct place to assign blame in that scenario is on people so partisan that they let tribal hatreds blind them to a scientific fact.

If you are Buzz Bissinger, and you think rich people should pay more taxes, and you wish financial regulation had been tougher, and you support Obamacare, it's ... well this is the easiest one of all, basically, who knows what is even going on with that guy.

Mayor Michael Bloomberg has mainly the exact same policy preferences as Barack Obama and the rest of the center of the Democratic Party -- and he has spent years now refusing to admit this, because he seems to not like the president personally. Bloomberg has also spent millions, over the years, ensuring that Republicans maintain their control over the New York state Senate, and Republicans have rewarded him by never actually supporting the things Bloomberg wants Albany to do to help New York City. And now he has his super PAC, which will support causes that a current major American political party already supports, except he is going to make a big point of giving much of the money to moderate Republicans and Independents, because that sort of pointless branding is actually more important to him than achieving his aims.

To be fair to my bete noire, Bloomberg is the smartest of all these people, and "throwing money at people who support your goals until there are more people who support your goals" is the smart rich man's way of getting his way, but the Americans Elect debacle showed that rich centrists who refuse to admit that the Democratic Party is already the party of rich centrists end up wasting a lot of their own time and money. Each "independent" elected to office is a coalition of one, with all the attendant power that suggests. Each "moderate" Republican Bloomberg gets elected to legislative bodies will serve to grow the majority or minority of Republicans in those bodies whose positions are completely opposed to Bloomberg's, and increase those Republicans' influence as surely as each Blue Dog increased the power of Obama and Nancy Pelosi.

What these men have in common is that they all dream that politics would be improved if politicians were totally unaligned with any faction, all independent statesmen dispassionately choosing the most rational position in every individual circumstance. They have swallowed whole the myth of the American Independent, who votes for the Man, Not the Party. But you're always voting for the party. You can't escape that. Democrats who voted for Eisenhower were voting for a moderate Republican in a party with a lot of moderate Republicans. That's not the case anymore.

The Romney endorsers imagine he may turn out to be a maverick -- Maybe he'll end the drug war! Maybe he'll go back to being a pragmatic Massachusetts moderate who can reach out across the aisle and Get Things Done! -- but he will turn out to be a Republican president, working with, most likely, a fully or partially Republican Congress. In that event, conservative Republican policy goals will become law.

I know party politics is gross -- it's so icky and partisan to support one party, all the time! -- but it's the system we have. If you're a moderate liberal, you are, I'm sorry to say, a Democrat. The faster you can get over that hangup, the faster you can actually work to support your claimed agenda.