Will voter suppression and dirty tricks swing the election?

The news is all about pre-election dirty tricks, but the efforts most likely to affect turnout happened long ago 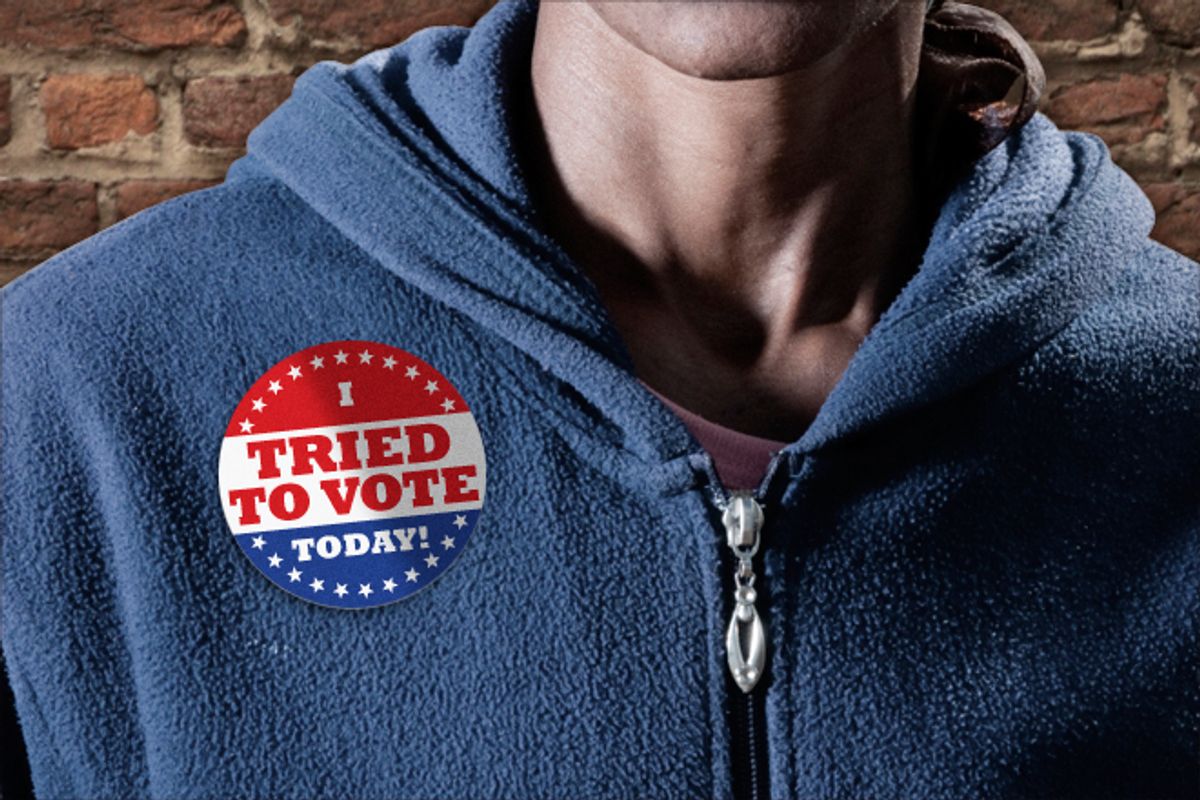 On Thursday of last week, Virginia authorities charged a man working for the Republican Party with dumping the voter registration forms of Democrats. In Albertis, Pa., authorities arrested the town’s 19-year-old Democratic city council member after he allegedly stole yard signs of his Republican opponent.  In minority urban areas of Ohio and Wisconsin, an anonymous group has paid Clear Channel (owned in part by Mitt Romney's former company Bain Capital) to put up billboards proclaiming that “Voter Fraud Is a Felony.”  And a Tea Party-affiliated group, True the Vote, is promising to send observers into polling places in Democratic areas, leading Democrats to cry voter intimidation.

Does this stuff matter? Or is it just a bunch of noise before our hyper-polarized and hyper-partisan election, as polls show both sides expect the other to try to steal the election? The answer is probably a little bit of both. But the real action when it comes to affecting election turnout probably happened months or even years ago.

Every close election seems to have its share of dirty tricks, and in recent years more of the stories seem to involve Republican actions to keep down the Democratic vote rather than the other way around.  (Though there are counterexamples, such as claims of Democrats slashing tires of vans rented by Republicans to get out the vote in 2004 in Milwaukee.)

In researching these incidents for my book, "The Voting Wars," I discovered that many of these attempts at vote suppression were boneheaded and unlikely to work.  Consider the case of ex-Marine Chuck McGee, who was working for the Republican Party in New Hampshire in 2002.  McGee received a flier in the mail from the state Democratic Party with phone numbers for voters to call offering them rides to the polls on Election Day.  The flier listed six phone numbers from around the state, including five Democratic Party offices and the firefighters union in the town of Manchester.  McGee later testified that after reading the flier, “I paused and thought to myself ... I might think of an idea of disrupting those operations ... Eventually the idea coalesced into disrupting their phone lines ... [It’s] military common sense that if you can’t communicate, you can’t plan and organize.”

McGee hired a company from out of state to jam the phone lines. Within an hour of its happening on Election Day, with news reports swirling, the head of the state Republican Party figured out what happened and shut the effort down. But Democrats made political hay of the incident for years, and it led to criminal and civil trials.

In fact, many of these Republican attempts to suppress the vote backfire and actually may help Democrats get out the vote.  Consider the “No Votes!” ads run by a Republican front group “Latinos for Reform” (funded by an antiabortion activist in California with no apparent Latino roots).  The Spanish-language ads urged Latinos not to vote in the closely contested U.S. Senate race in Nevada between incumbent Harry Reid and his Republican challenger Sharron Angle.  The claim was that Democrats did not deserve the Latino vote because the party had not done enough for immigration reform, even though the head of “Latinos for Reform,” former RNC official Robert de Posada, opposed the immigration reforms favored by Democrats.

Democrats denounced the ads as a form of voter suppression and used the ads as a rallying cry to get out the vote.  “Si se puede,” declared United Farm Workers veteran Dolores Huerta, in an effort to get out the Latino vote.  In this election, activists are similarly denouncing the voter fraud billboards even though there is no reason to believe that these billboards are likely to deter eligible voters from voting.  Why would they? Then again, maybe these ads are enough to intimidate ex-offenders. (Clear Channel has just announced the billboards are coming down.)

The destruction of Democratic voter registration cards, which has been alleged not just in Virginia but as part of the operation of Republican operative Nathan Sproul, is more damaging.  People who think they are registered but are not are literally disenfranchised.  If you are not registered to vote, authorities will give you a provisional ballot if you show up to vote on Election Day, but that ballot will not be counted if election officials cannot find a valid registration on file.  Fortunately, the scale of this dirty trick so far appears small. Voters who are worried should check their registration status now with election officials.

True the Vote’s poll watching/challenging efforts in Democratic areas may not materialize.  Back in 2004, Republicans threatened to challenge 35,000 Ohio voters, and a case over these challenges made it all the way to the Supreme Court on the morning of Election Day.  The courts allowed the challenges to go forward, but they didn’t. True the Vote may also be more bark than bite. Part of the talk of challenges could be designed to suppress turnout by making voting seem like too much of a hassle.  A bolder plan would be to send observers or challengers into the polling place to slow things down, in the hopes of discouraging people from voting.  Already, Democrats have put Ohio election officials on notice to watch out for polling-place problems.

In the end, the efforts most likely to affect turnout happened long ago, when the public wasn’t paying attention.  Republican legislatures over the last few years have passed laws imposing voter ID, cutting back on early voting, and making voter registration harder.  These laws seem aimed to modestly suppress Democratic turnout.

The lesson is that when it comes to efforts to depress turnout, sometimes the stuff under the radar is worth a lot more attention than the stories that make the headlines in the weeks before Election Day.

Richard L. Hasen is the chancellor’s professor of law and political science at the University of California at Irvine and the author of "Election Meltdown: Dirty Tricks, Distrust, and the Threat to American Democracy."