The GOP nominee knew there was no way for him to win the foreign policy debate, and it really showed 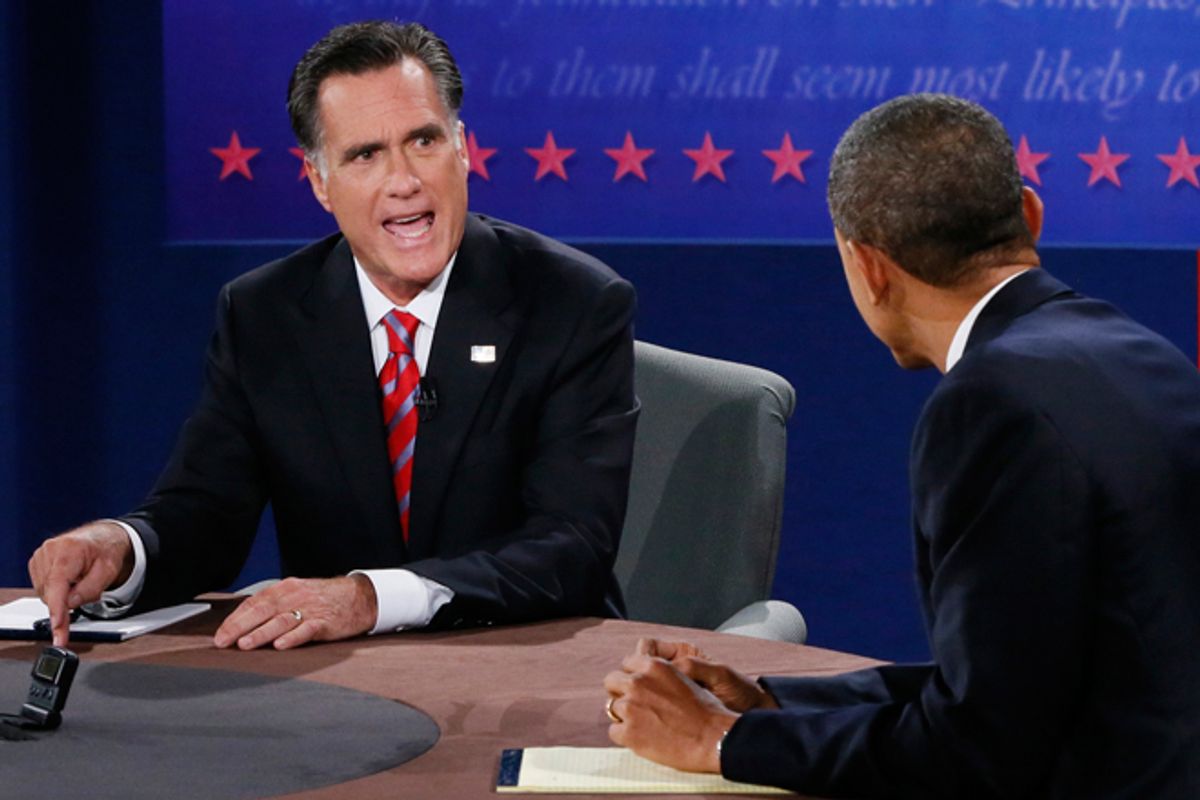 The good news for Barack Obama is that Monday night’s debate went better for him than the other two. The bad news is that it figures to have the least impact on Election Day.

Three weeks ago in Denver, the president was practically comatose, while Mitt Romney was glib and confident in a way many viewers hadn’t seen before. Last week, Obama bounced back and turned in an impressively punchy performance, but Romney held his own (except for his awful Libya flub) and scored some real points on the economy. On Monday, Obama showed up with some strong material, challenged his opponent persistently, and was met with surprisingly little resistance from Romney.

That Romney was playing it safe became clear moments into the debate, when he took Bob Schieffer’s lead-off question about Libya and immediately sought to broaden it out, launching into a discussion about Egypt and the Arab Spring. He also complimented Obama on ordering the bin Laden raid, but then added that “we can’t kill our way out of this mess.” Obviously, Romney had no interest in a repeat of last week, when his assertion that Obama had waited two weeks to call the attack on the Benghazi consulate a terrorist act blew up in his face. This time, Romney seemed content to run out the clock.

And it went that way for most of the night. Sure, Romney repeated some of his standard attacks on Obama’s foreign policy leadership, branding him insufficiently concerned about Israel and even dredging up the “apology tour” nonsense. And when he could, he tried to pivot away from foreign policy and to remind voters about the fragile state of the domestic economy. But Romney wasn’t eager to engage Obama on many specific points, or to offer a significantly different vision of America’s role in the world. He agreed with Obama on drones, on Afghanistan and even on Syria, acknowledging that besides calling for the arming of rebels he doesn’t have a different course of action in mind.

I think three factors contributed to this. The first is that Romney and his team recognized that foreign policy isn’t their strong suit in this election. His campaign strategy depends on economically anxious voters turning on Obama; there’s just not much room for foreign policy and national security in this equation – and it shows in how little effort Romney and his party have put into defining their international agenda. This was going to be a tough debate for Romney to win, no matter what.

He was further hindered by the neocon pronouncements he made en route to the GOP nomination, and the strong neocon bent of his foreign policy team.  Voters are no more eager to return to Bush-era international policies than they are Bush-era domestic policies, and Romney plainly understood that, so he reined in the hawkishness. But he wasn’t about to attack Obama from the left either, so this left Romney with little to say at times.

He also may have been spooked by what happened at Hofstra last week, which marked the second time he’d made a political mess for himself with Benghazi. Maybe the Romney camp concluded that it just wasn’t worth the risk of going down that road again.

The result is that some of Obama’s best attributes were able to shine. He was in command of the facts, ably deflected Romney’s attacks (particularly on the apology tour business, when Obama pointed out that like Romney he’d gone to Israel as a candidate, but that he hadn’t taken donors or fundraisers with him), and seemed more presidential than he did in the first two debates. There seemed to be a stature gap at the table.

The early returns are encouraging for Obama. A CBS News insta-poll of undecided voters found that 53 percent judged him the winner, compared to just 23 percent for Romney. In that same poll last week, Obama’s edge was just 7 points, and in Denver he was blown out by 24. If the Obama we’ve seen in the last two debates had shown up in Denver, this race might not be as tight as it now is.

The problem for Obama is that Monday’s debate will probably have the smallest audience of all of them. And even if voters were more impressed with him than Romney, this remains an election that’s fundamentally about the economy. Nor was there a particularly dramatic or memorable moment that will live on for the rest of the race. Obama delivered a few funny lines (“Well, Governor, we also have fewer horses and bayonets”), but there was no Romney meltdown.

In the best case for Obama, his strong performance offers a crucial bit of reassurance to voters who like him and were leaning toward voting for him before Denver. Perhaps this, coupled with his showing last week, will provide these voters with the motivation they need to troop to the polls for him. The worst case for Obama is that Monday night won’t matter at all – and given where the race stands, that wouldn’t necessarily be bad for him.