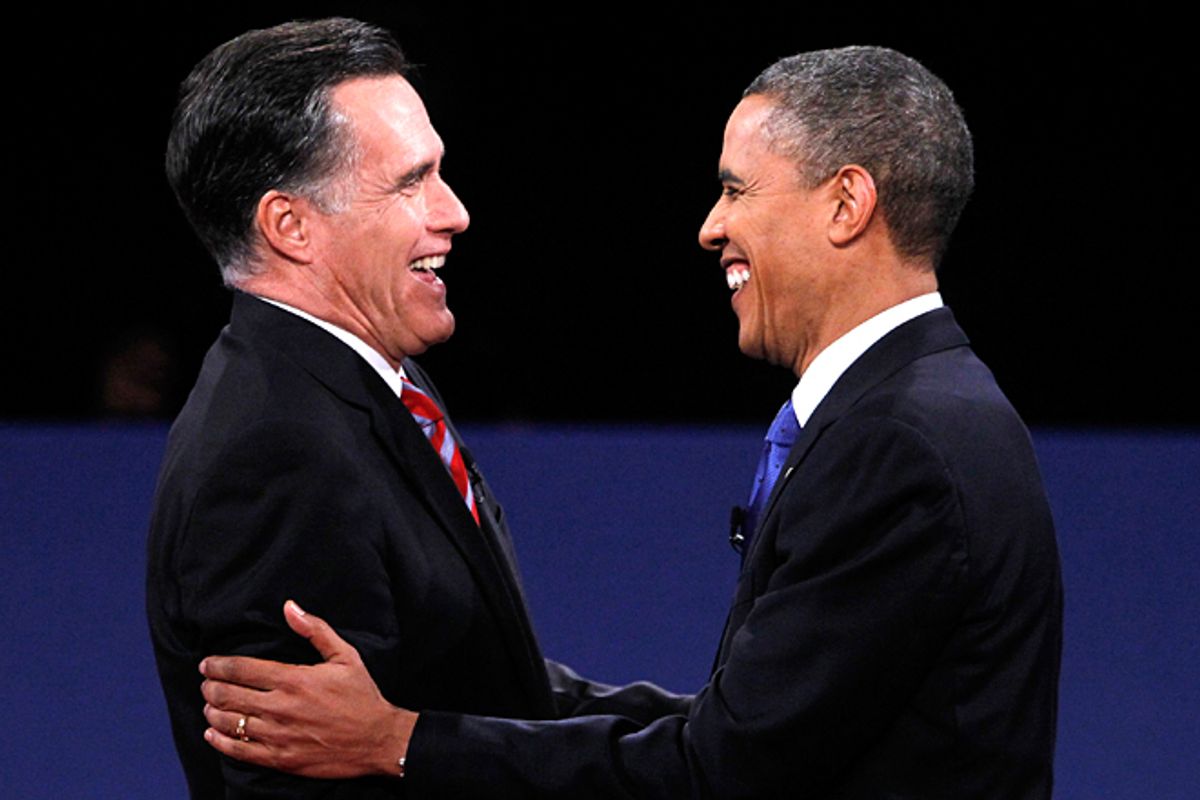 The near-unanimity on major foreign policy issues displayed by President Barack Obama and his rival Governor Mitt Romney in Monday’s presidential debate should not have surprised anyone. Unlike social issues or domestic economic policy, U.S. foreign policy is usually characterized by bipartisan consensus.

There are two major reasons for this.  The first is that foreign policy tends to be driven by particular threats, like the Soviet Union or al Qaeda, or by particular opportunities, like the chance to open up foreign markets for U.S. producers or investors after World War II and the Cold War.  At any given time, it is clear what the major threats or opportunities are.  Nobody during the Cold War suggested that the U.S. should worry about Brazil rather than the USSR, and nobody after 9/11 claimed that the Irish Republican Army was a greater threat to America than al Qaeda.

Consensus in foreign policy is reinforced by the hierarchical, nonpartisan nature of the U.S. military and diplomatic and intelligence agencies.  In domestic policy, Cabinet departments and other agencies are staffed, from the top to the middle rungs, by political appointees who bring partisanship or special interests into the very heart of the federal bureaucracy.  But the U.S. military, the Foreign Service and other foreign policy personnel systems are meritocratic career services.  While presidents can award ambassadorships to donors, they cannot appoint campaign contributors or political activists as generals and admirals.  Because there are fewer political appointees, there is far more continuity between administrations of different parties in foreign policy than there is in other areas.  And high-level political appointees in foreign policy, with some exceptions, like the neoconservative firebrand John Bolton, tend to pose as technocratic experts who disdain petty partisanship.

Although pundits like to play the game of defining presidential “doctrines,” like the Truman Doctrine, the Nixon Doctrine, and the Reagan Doctrine, changes in the U.S. foreign policy consensus usually do not correspond to presidential elections.  What's more, any given American strategic consensus tends to endure through more than one presidency.

Since 1950 there have been four American strategies that enjoyed bipartisan support in their times:  Containment, Détente, the Second Cold War, and Hegemony.

Containment was adopted during the Korean War.  As an alternative to American isolationism, or aggressive “roll-back” of post-1945 Soviet gains in Eastern Europe and elsewhere, the containment strategy required the U.S. to prevent the further expansion of the communist bloc without attempting to overthrow communist regimes in the Soviet or Chinese communist spheres of influence.  Adopted by Truman, the containment strategy was followed in different ways by the Eisenhower, Kennedy and Johnson administrations.  The high costs of containment policy in Indochina, following the costly war in the Korean peninsula a decade earlier, inspired the search for an alternate, less costly U.S. grand strategy.

President Nixon provided an alternative in the form of the Détente strategy.  While seeking a face-saving exit from Indochina, the Nixon-Ford administration sought to base U.S. foreign policy on a kind of amoral Realpolitik, pitting the Soviet Union against China, following Nixon’s startling opening to China.

As an American grand strategy, détente was short-lived.  Liberals complained that it downplayed the issue of human rights, while conservatives complained about appeasement of communism.  The Soviet invasion of Afghanistan in 1979 led the U.S. to abandon détente for a Second Cold War, in which communist China and the U.S. along with America’s other allies were aligned against an increasingly isolated Soviet Union.  Although the Reagan administration was more belligerent in its rhetoric, the Second Cold War actually began in the late Carter administration, with a massive U.S. military build-up and the eclipse of Democratic doves by Democratic hawks like Carter National Security adviser Zbigniew Brzezinski.

The Second Cold War came to an end with the rise of Gorbachev, the fall of the Berlin Wall in 1989 and the dissolution of the Soviet Union in 1991.  A brief and vigorous debate on the future of U.S. foreign policy among neoconservatives, liberal internationalists, realists and neo-isolationists effectively came to an end when Saddam Hussein invaded Kuwait in 1990 and the U.S. expelled him in the brief Gulf War in 1991.

Following the swift and low-cost U.S. victory in the Gulf War, most Republicans and Democrats embraced a new and overly-optimistic strategy of U.S. global hegemony.  The absence of a great power rival like the Soviet Union removed constraints on the use of military action, first in the Middle East and then in the Balkans during the Wars of the Yugoslav Succession.  Neoconservatives proclaimed an age of American empire and democracy promotion, while liberal hawks supported aerial bombardment as a method of promoting human rights.  The al Qaeda attacks on New York and Washington on 9/11/2001 merely reinforced the hegemony strategy, which peaked with the near-simultaneous U.S. invasions of Afghanistan and Iraq and the triumphalist “democratism” of George W. Bush’s Second Inaugural Address.

By 2006, however, the costs of the Iraq and Afghan Wars had soured the American public on the hegemony strategy.  The shift to a new strategy of Retrenchment took place during George W. Bush’s second administration, when the realist Robert Gates replaced the neoconservative Donald Rumsfeld at the Defense Department.  Barack Obama’s foreign policy has continued the neo-realism that began in the late Bush years.  Obama initially retained Defense Secretary Gates, who presided over a “pivot” in U.S. strategy away from nation-building in the Middle East toward an unstated policy of balancing the growth of Chinese military power in Asia.  In response to the Arab spring, the wave of revolutions through the Arab world, the U.S. under Obama has preferred to intervene at the margins, supporting local forces and, in the case of the bombing of Libya, NATO allies.

Whether Obama or Romney wins the presidential election in two weeks, the U.S. is almost certain to continue this modest Retrenchment strategy.  In his debate on foreign policy with the president, Mitt Romney tried to convince a war-weary American public that he does not favor new American wars in Syria or Iran.  On topics ranging from using drone attacks on suspected terrorists as a cheap (if morally questionable) alternative to sending troops to avoiding direct U.S. intervention in Muslim civil wars and challenging Chinese industrial policies that disadvantage American manufacturers, there was no daylight between the president and the would-be president.

The present bipartisan consensus of Retrenchment will be replaced by something else.  But an American foreign policy consensus tends to hurtle on, supported by inertia, until radical rethinking is forced on the American foreign policy establishment by major events like the Tet Offensive in 1968, the Soviet invasion of Afghanistan in 1979, the Gulf War in 1991 and the failure of the wars in Iraq and Afghanistan by 2006.  At some point there will be yet another foreign policy consensus—but it will be triggered by some cataclysmic event in world politics, not by a mere American presidential election.