The president finished the debate season with a definitive win. But will it matter? 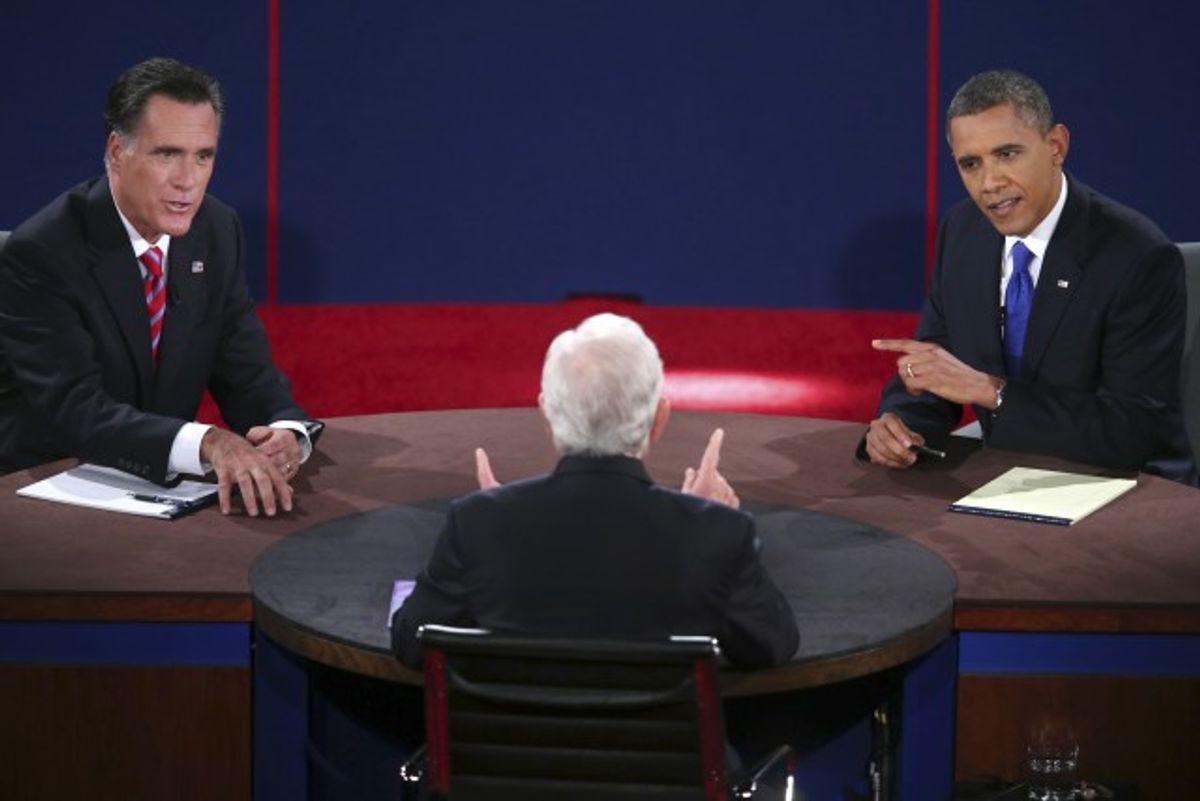 So far, the conventional wisdom for the presidential debates has been on target. Pundits correctly saw the first debate as an outstanding victory for Mitt Romney, and the second as basically a draw, with Barack Obama winning a small victory and stopping the bleeding of the previous engagement. For the final presidential debate—a bout over foreign policy, held in Boca Raton, Florida—the conventional wisdom is that Obama won, handily, but that Romney proved himself capable of taking over as commander-in-chief.

It’s not that Romney performed poorly—he was mediocre from beginning to end—as much as it is that he already passed that plausibility test. It seems that in the excitement of the debate, pundits have forgotten that Romney’s image as a plausible alternative to the president was the whole reason he won the Republican presidential primary. Indeed, it’s the basis of his political persona: Mitt Romney might not have a position on the issues; he might not have core convictions; but he does project “leadership” and a sense of general competence. His political pitch, from his first race in 1994 to the present, has been a variation on this: “I can fix things, and when you hire me, you’ll find out!”

Romney passed the commander-in-chief test six months ago, when he clinched the Republican nomination and introduced himself to the country as the man who wants to replace President Obama. This debate was less about whether Romney looked like a commander-in-chief and more about whether he could stand up to Obama and offer a salient critique of the administration’s foreign policy. The answer? Not so much.

If there was anything that defined Romney’s debate performance, it was his constant praise of the administration’s foreign-policy choices. From Iran to Afghanistan to Iraq to bin Laden to China to turmoil in the Middle East—hell, on everything—Romney affirmed the administration’s position and promised to continue the policy. It got so blatant that, at one point in the debate, Obama called him out, describing Romney’s stance as “my policies, but I would talk louder.”

Comedian Bill Maher, a prominent Obama supporter, put it this way: “Mitt’s entire debate strategy: What he just said, but from a white guy.” Given the demographics of this race—Romney has a double-digit lead among whites—that might not be far from the truth.

This was Obama's strongest debate performance of the month. He made a clear defense of his administration’s policies on national security, hit Romney on his belligerent rhetoric and, most important, refused to let Romney blur the differences between the two. By the midpoint of the debate, Romney had no choice but to defend his words, which—not surprisingly—did him few favors.

Unfortunately for Obama, he too had his fair share of weak moments. At various points during the evening, the debate shifted from foreign policy and became a fight over jobs and the economy. It was here that Romney regained a little momentum and fought Obama to a draw. Even if you believe that the president has a solid record on the economy—and I do—it remains a fraught issue with voters. A foreign policy debate isn’t the time or place to defend an economic record, and Obama risked a fair amount by bringing domestic issues into the fight.

Even still, this was a clear Obama knockout. I’m not a fan of immediate post-debate snap polls, but they are instructive if you want a sense of the mood. The CBS instant poll has Obama winning the debate by a margin of 30 points, 53 percent to 23 percent; CNN shows an eight-point win, 48 percent to 40 percent, and Public Policy Polling shows Obama winning by an 11-point margin in swing states, 53 percent to 42 percent.

Will this matter? The first debate was a big Romney win that brought the election back in line with the fundamentals—a close race with a slight Obama lead. The second debate rebuilt Democratic enthusiasm, and kept Obama from falling further. Romney’s loss in this debate was similar to Obama’s in the first, but the stability of the status quo makes it hard to know if it will make a difference.

But I wouldn’t dismiss the possibility. Tens of millions of people watched tonight’s debate, which gave both candidates a final chance to show their best sides. Obama won it. My instincts say that this won’t have a big effect. But I’ve been wrong before.