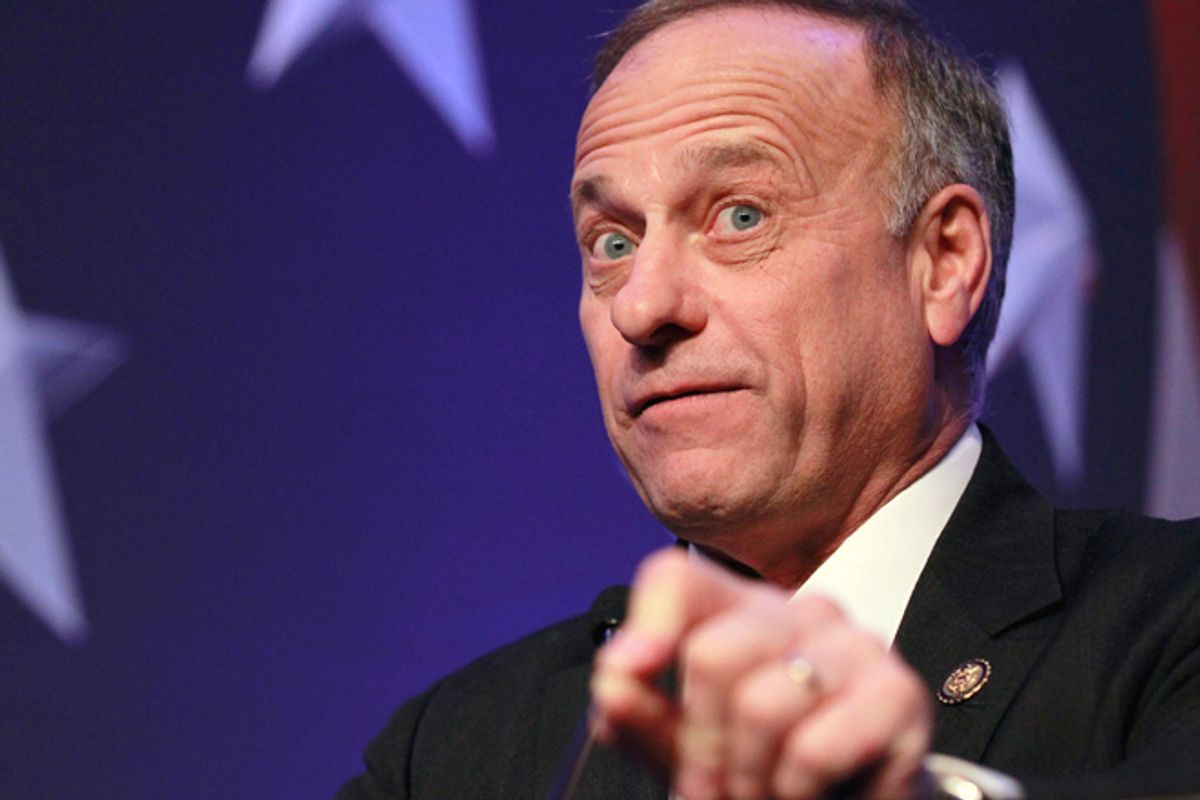 On a clear day in mid-August this year, Iowa Republican Rep. Steve King, who faces one of the toughest reelection bids of his career, mounted a stage at the State Fair and recounted a story about how he had an epiphany, one day in the mid 1970s, when he was an indebted newlywed: “I came back home that day and I said ... Nobody's going to take care of us. Nobody's going to offer me that magnificent job. We’re going to have to earn it ... Three months later I started a business.” It’s a classic American story of self-reliance, and King added a uniquely Republican punch line: “And I didn’t realize that if I did that, I didn’t build that!” This was, of course, a clumsy quip on the (taken-out-of-context) Obama quote that would become the theme of the Republican National Convention and a symbol of everything the GOP stood for -- building private industry without any help from the government.

But that's easier said than done, as King himself should know. As it turns out, King relied on government contracts in part to build his construction company, which took in more than $1.66 million via municipal projects between 1994 and 2011, according to documents obtained by Salon. Asked about the contracts, King acknowledged them, but defended his business. "I built it. I built it on low-bid -- both private and public -- contracts. I created jobs and saved the taxpayers money on every road I built,” he said in a statement. He also noted that he sold his company to his eldest son when he entered Congress in 2003.

As with many politicians, King forged his political career out of a successful stint in business. He notes in his official bio that he “started King Construction in 1975 and built the business up from one bulldozer. He brings valuable knowledge to Congress as an agribusinessman and a small business owner for 28 years.”

But, as King now acknowledges, government contracts were a key part of his business going back some time. In 1987, he sued a client who had not paid him. An affidavit King filed includes a letter the future congressman sent to a customer in 1985 requesting payment. Explaining his urgency, King wrote at the time, “as you are  aware, we are in a very depressed farm economy and my only other market for my works is contract work from various government agencies.”

Documents show that King’s company worked regularly for various local governments throughout the 1990s and 2000s. In 1994, he demolished a firehouse for the City of Odebolt for $15,500. In 1998, he took about $82,000 from the same city for a memorial walk. In 2002, the company made $64,000 from Crawford County to stabilize a building, followed a few months later by a $141,000 contract with the City of Battle Creek for wastewater treatment improvements.

The next year, King was elected to Congress and his son took over the company, taking in at least 10 other municipal contracts through 2011 worth up to $200,000 each for everything from road construction to water treatment improvements. Altogether, from the firehouse demolition in 1994 to a grading job for a local utility last year, King Construction made at least $1,665,000 in government contracts.

Vice-presidential nominee Paul Ryan, whose family also owns a construction business, ran into the same problem after Sally Kohn reported for Salon that Ryan Inc. had done a good deal of work on the federally financed interstate highway system, as well as worked on several municipal projects.

None of this is to diminish the success of King’s business, but rather to point out that conservative rhetoric about the role of government in the economy often conflicts with reality.