A pair of PBS specials reminds us that 50 years ago this week, we were on the brink of total nuclear annihilation 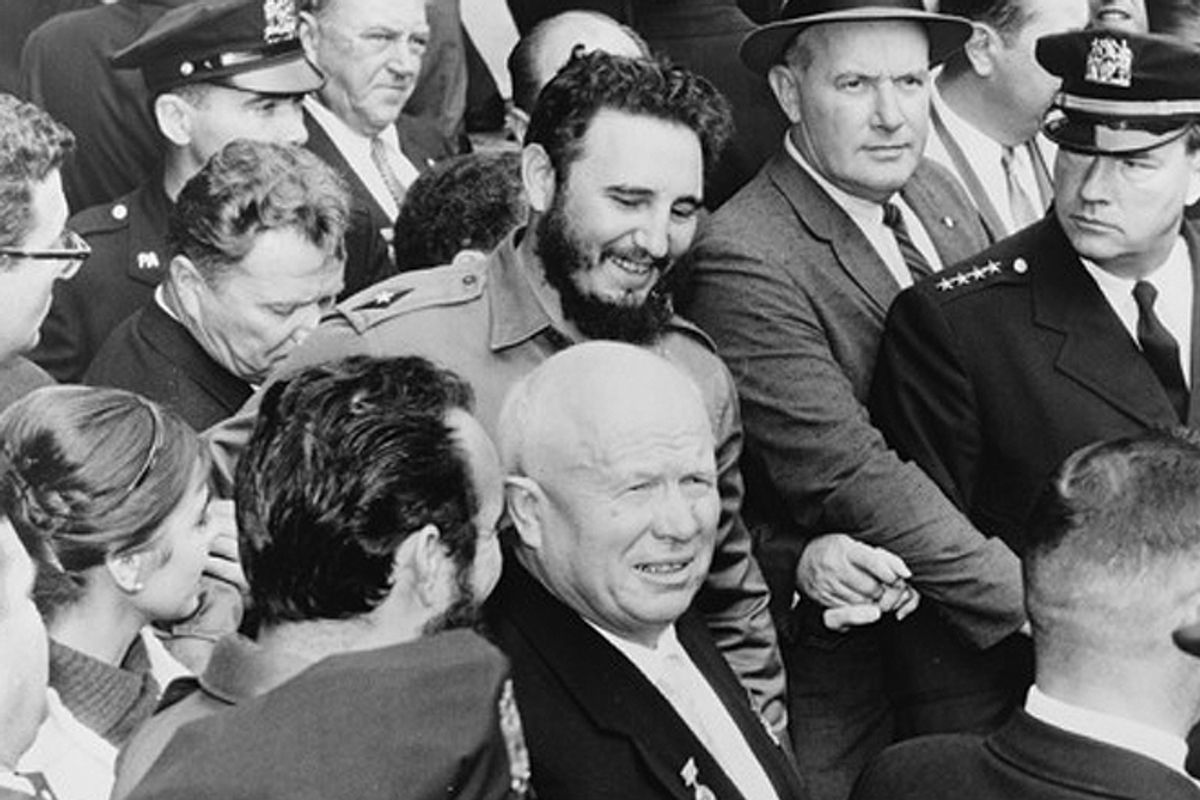 It seemed at first more a testimony to his own advanced age that 75-year-old Bob Schieffer invoked the Cuban Missile Crisis before the final presidential debate got underway in Boca Raton, Fla., Monday night. Yet, as a pair of PBS documentaries tonight reminds us, nothing could be more central to a contemporary foreign policy discussion than the frightening brink of total nuclear annihilation reached during that tense October, 50 years ago this week.

For those alive in 1962, the fear engendered by the Cuban Missile Crisis was indelible. At a time when everything was still seen in black-and-white on TV and futile-looking nuclear bomb drills were a regular occurrence at elementary school, the memory of a day when the third-grade teacher said, “You may be able to tell your grandchildren you were there when World War III started,” was at odds with what would have truly happened: We’d all have been wiped out, with no grandchildren to tell. A day when schoolchildren, informed of the imminent end of the world by thoughtless teachers, ran home screaming and crying is not something easily forgotten.

The anticipation and dread of the Kennedy speech that night detailing the threat and laying down the warning was more compelling than anything on TV up until then – even to a third-grader. It was, according to historian James G. Blight, “the scariest speech ever given."

“I defy anybody to find any one that scared more people more profoundly than that speech,” he says in John Murray’s film “Cuban Missile Crisis – Three Men Go to War,” which brings the old Cold War chill right back, while boiling the crisis down to the personalities involved – young President John Kennedy, old premier Nikita Khrushchev and Cuban revolutionary leader Fidel Castro.

Yet the film shines in its array of voices recounting the tale – on fuzzy declassified White House tapes and in interviews with participants such as Kennedy adviser Ted Sorensen (before his death in 2010) quoting Robert McNamara as saying he might be looking at his final sunset. There is also a U.S. brigadier general who recalls his days flying over Cuba in a spy plane and the guy who analyzed photos for the CIA, who detected the new missile sizes on the island, and told his wife to start driving to Missouri if she didn't hear from him, to avoid the fallout.

Because so much time has passed, there are voices too from Cuba (though largely academics), and also from Russia, including the son of Khrushchev and a Soviet sub commander who had the power to use nuclear weapons as he saw fit (but did not) and various other old soldiers, including the one who pressed the button launching the missile that shot down an American in a spy plane over Cuba. The Kennedy speech, the film points out, was the most efficient way not only to inform the American people, but to get the word out to the Soviet Union more quickly than a diplomatic letter would.

It’s largely a tale of talking heads but it’s illustrated with period stock footage, impressionistic modern day footage of parks and streets and things that would be at risk in the attacks, and even more abstract images of film dripping with fixer or pools of concentric waves in water, all augmented by eerie electronic music. One oddly fitting musical interlude is using the Christmas song “Do You See What I See” against footage of nuclear preparation and test bombs, with “a tail as big as a kite.”

Although it has been written as such, the Cuban Missile Crisis was much more than a standoff where the other guy blinks. Despite the shooting down of spies, there was a secret deal to remove U.S. missiles that were even closer to the Soviet Union in Turkey than Cuba was to the U.S. if the Soviets turned around in the Caribbean.

The story of the Soviet submarines dispatched to the waters near Cuba is related in more detail on “Secrets of the Dead,” which follows. Although it is told in fake-looking re-creations, the untold stories of the suffering of the soldiers, boiling in the subs for weeks, gathering at the ends where temperatures went down to 110 degrees, is also a story of an unsung hero.

The sub officers had permission to fire a nuclear weapon if they felt it necessary, but three men had to be in agreement to do so. Soviet naval officer Vasili Arkhipov is singled out as standing alone in refusing to do so, an amazing moment that earns the episode the title "The Man Who Saved the World." But, talk about being contemporary, what he did is also pretty much the plot line of the current ABC series “Last Resort.”