The man without a soul

In the final debate, Romney disavows almost everything he's ever said on foreign policy while the media just shrugs 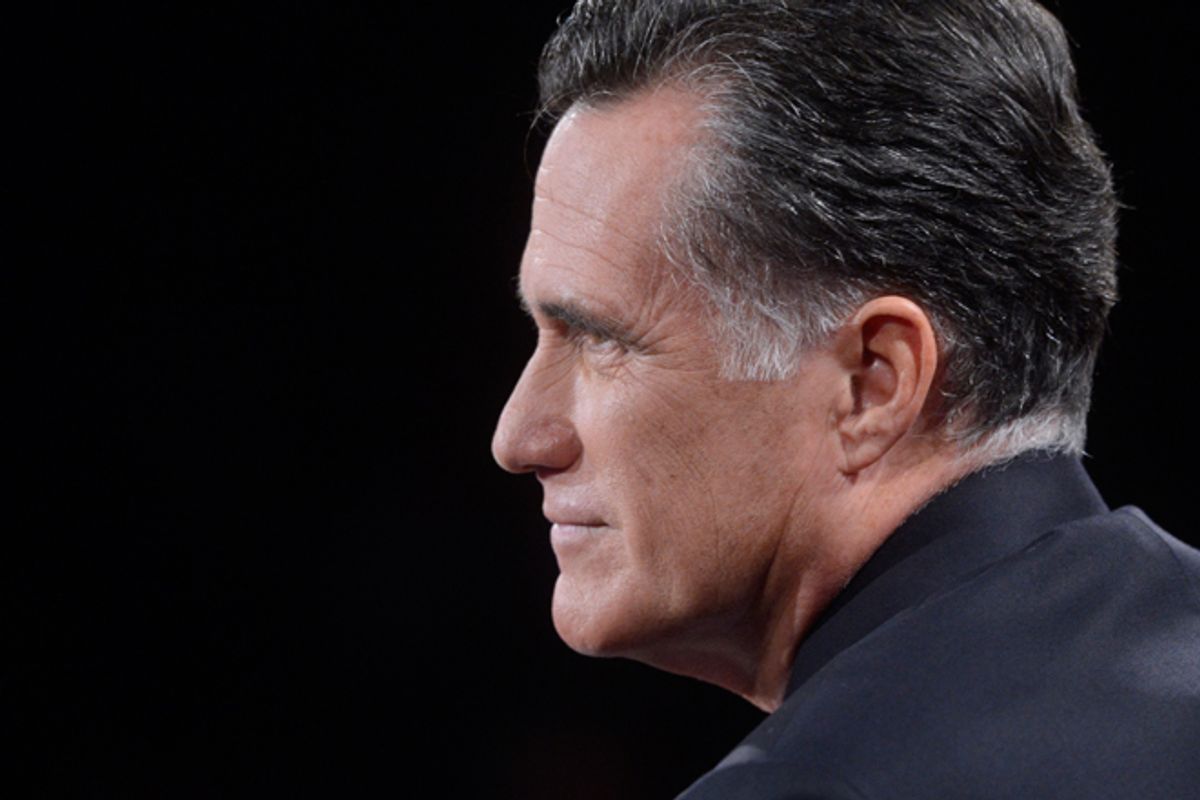 Mitt Romney should be doing a walk of shame today, after reversing most of his irresponsible, hawkish foreign policy statements from the last year just to have a hot night with undecided female voters in the final debate. How does he live with himself?

But I'm having a hard time watching television coverage of Romney's debate performance the morning after. The conventional wisdom seems to be that while President Obama won the debate, Romney's "prevent defense" at least kept him in the race – and it was the politically wise course. Of course, Obama's "prevent defense" two weeks ago in Denver was a debacle that changed everything. I'm not sure why Romney's turn at it is supposed to be smarter politics.

Beyond scoring the debate on style points, though, why aren't more people horrified by Romney's capacity to disavow virtually everything he's said on foreign policy and cuddle up with Obama, in order to seem less frightening to voters? On Afghanistan, on Iran, on abandoning Egypt's Hosni Mubarak, on killing Osama bin Laden, on Syria, on drones, Romney mostly said "me too" to Obama's policies. And it's not as though the debate merely gave Romney the space to explain foreign policy positions that may have been misinterpreted. After a year spent attacking Obama's "weakness" globally and promising to be hawkish, he was, at times, the dove, insisting more than once "We can't kill our way out of this." And when he wasn't echoing Obama, he sounded like a schoolboy reciting what he just learned in world geography class.

I found it chilling. Once again I thought to myself: Who is this guy who's trying to imitate a cautious, sober global statesman (albeit one who sweats a lot)? I just watched Doris Kearns Goodwin on "Morning Joe" say Romney did the right thing because his goal was not to scare anybody and lose the momentum he gained from Debate 1, and everyone seemed to agree. But in what new realm of cynicism is it the right thing to hide your real policies in order to become president?

I suppose the media folks who are reassured by Romney's mild debate performance think that's the real Romney – he's not the hawk who'd let crazy John Bolton, a key adviser, run his foreign policy. This is the same approach a lot of people take to Romney's extremism on women's issues – oh, c'mon, ladies, he's really a Massachusetts moderate who doesn't mean any of what he says about overturning Roe v. Wade or defunding Planned Parenthood. That's ridiculous. The fact is, we don't know which Mitt Romney would take the oath of office, and that alone should consign him to an ugly defeat in two weeks.

The only thing the post-debate punditry really cares about is whether Obama's modest (by their standards) debate win can make a difference, and again the conventional wisdom is it won't, because foreign policy debates never do. First of all, I'm not so sure about that. I'd like to see some polls before I weigh in. But most important, insisting that the debate won't move the electoral needle almost instructs voters not to take it seriously, and downplays the extent to which Romney's reinvention is played as big news.

I go back to Kevin Drum's idea of the "hack gap" between the left and right, in which righty hacks are supposedly so much more numerous and robotic in their support of their candidates that they move public opinion (and spineless mainstream media folks) with the sheer force of their lies, and the left can't match them either in numbers or mendacity. I still don't think that's the way it works. The fact that MSNBC pundits were thrilled with Obama's last two performances certainly didn't change the media narrative that these debates don't really matter much. Far more influential, to me, is most of the media's inability to either see, or tell the truth about, how far to the right the Republican Party has shifted in the last 20 years.

Obama's best line came when he told Romney, "You seem to want to import the foreign policies of the 1980s, just like the social policies of the 1950s and the economic policies of the 1920s." That wasn't just a good zinger, it's a great summary of what's at stake in this election. I hope voters ignore the supposedly savvy horse race coverage of this crucial debate, and pay attention to Romney's lack of core convictions on foreign policy or anything else.