Have you noticed no one ever calls Joe Biden a Marxist? Just one of many double standards Obama faces regularly 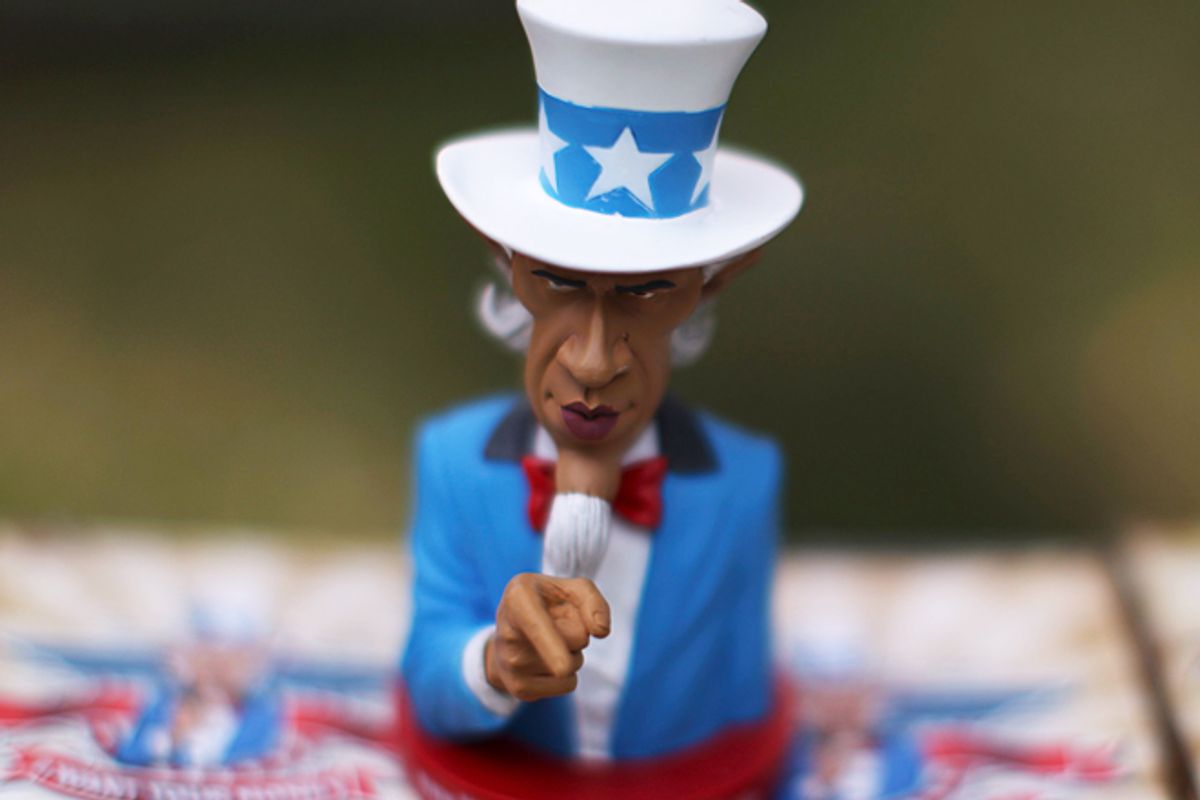 The angry response to my Salon article last week on White Privilege was as swift as it was predictable. To sum up the wave of bigoted blowback in my email box and on my Twitter feed, the argument from denialists seems to be that race is no longer a factor in American politics, and that therefore, those who mention bigotry in the context of President Obama are, in the ugly retrograde vernacular of the 1980s, "race hustlers" engaging in an unseemly ploy to change the subject from the current administration's policies.

It's certainly true that bigotry is not automatically synonymous with criticism of the Obama record. For instance, many liberals (including me) who question the substantive gap between candidate Obama's policy promises and his policy record are not doing so out of any racial animus; they are doing so out of a sense of democratic citizenship. Similarly, many honest conservatives who oppose the Obama administration's civil liberties atrocities and Drug War are doing so on principle rather than because of prejudice.

That honest, non-racialized dissent, however, does not mean racism has ceased to be a factor in politics. As I showed a few weeks back, other parts of the conservative movement are running an explicitly bigoted campaign against President Obama. Just as troubling -- and arguably, even more pervasive -- is the racist double standards that continue to stealthily define our politics in ways that are difficult to see in the day-to-day grind of election campaigns. For those who pretend otherwise, here are five ways to know those double standards persist.

1. Joe Biden Is almost never called a socialist or a Marxist. Despite a Senate voting record and presidential policymaking record that align him with moderate Republicans from a mere decade ago, Obama is regularly derided as a socialist, a communist or a Marxist. By contrast, Obama's own white running mate, Joe Biden, has as liberal -- or at times even more liberal -- a voting record as Obama, but (save for the occasional Newt Gingrich outburst) is almost never referred to in such inflammatory terms. Indeed, in a rare interview that brought that term up to Biden, it was framed as a question to him about Obama, not about his own policies. Considering the fact that Biden is, by definition as vice president, carrying the same economic message but isn't given the same label, this is solid proof that the radical terms applied to Obama are Lee Atwater-esque methods of using euphemisms for racial epithets.

2. Romneycare is Obamacare, yet the latter is criticized. It's a well-known, undisputed fact that Romneycare was a conservative health insurance model constructed by the right-wing Heritage Foundation, and that it was Massachusetts' state-level model for the federal healthcare bill ultimately championed by President Obama. Nonetheless, under the first African-American president, the very same healthcare model the GOP championed is now being held up by the GOP as a redistributionist boondoggle. Is it merely a coincidence that the primary difference between Romneycare and Obamacare is that the former was championed by a white guy and the latter championed by a black guy? Almost certainly not, according to social science research.

In 2009, Stanford University researchers offered volunteers information about a health care plan supported by Obama and one supported by former President Bill Clinton. In fact, the plans were identical. But those who showed unconscious racial biases were much more likely to reject Obama's plan, the researchers reported.

Social scientists have concluded that many conservative white voters harbor a racial animosity that fuels their opposition to certain forms of government largess, especially if they believe it benefits the undeserving (black) poor. Political scientists Donald Kinder and Lynn Sanders, authors of "Divided by Color: Racial Politics and Democratic Ideals," call it a "subtle prejudice for modern times."

3. A white president would never be criticized for these statements about Trayvon Martin. No white president has ever been blamed for the varied and disparate transgressions committed by white folk. However, Obama is routinely blamed by conservative pundits for any violent or criminal incident involving any black person anywhere at any time in America -- because, in their bigoted minds, Black America is a monolith, and all black people know each other. If this isn't proof enough of a racist double standard, then behold the GOP establishment's reaction to Obama's heartfelt comments about the tragic killing of unarmed teenager Trayvon Martin.

After the incident, Obama said "When I think about this boy, I think about my own kids, and I think every parent in America should be able to understand why it is absolutely imperative that we investigate every aspect of this, and that everybody pulls together." As the Atlantic's Ta-Nehisi Coates noted:

The moment Obama spoke, the case of Trayvon Martin passed out of its national-mourning phase and lapsed into something darker and more familiar—racialized political fodder. Rush Limbaugh denounced Obama’s claim of empathy. The Daily Caller, a conservative Web site, broadcast all of Martin’s tweets, the most loutish of which revealed him to have committed the un­pardonable sin of speaking like a 17-year-old boy. A white-­supremacist site called Stormfront produced a photo of Martin with pants sagging, flipping the bird. Business Insider posted the photograph and took it down without apology when it was revealed to be a fake. Newt Ging­rich pounced on Obama’s comments: “Is the president suggesting that if it had been a white who had been shot, that would be okay because it wouldn’t look like him?”

Ask yourself: Had these comments been made by a white president of either party after such a tragedy, would anyone denounce that president, to the point of accusing him of supporting the killing of white kids?

4. America would neither ignore nor laugh off a young black male relative of Obama publicly fantasizing about violence against a presidential candidate. As I reported last week, Romney's son, Tagg Romney, cheerily riffed on his fantasies about committing an act of violence against a sitting president of the United States. This is different than some random Twitterer or Facebook commenter making some hideous remark, and it's different than him making the comment to a friend in private. He made the comment in his role as an official campaign surrogate, and broadcast it in a public interview. In response, most of the media ignored the story, and most conservatives played it down as nothing but an earnest son defending his dad.

None of this means Tagg Romney is a bigot. But it does highlight the racist double standard in our politics. For if the races were reversed --- if a young black male relative of Obama went on a radio show and publicly said he wanted to “jump out of your seat (and) rush down to the stage and take a swing" at Mitt Romney" -- it would be an instant national outrage, replete with headlines about an imminent race war and Romney's desperate need for beefed-up personal security.

5. If one of Obama's teenage daughters was unmarried and pregnant, it wouldn't be considered a "private" matter. When Sarah Palin was put on the Republican ticket in 2008, Bristol Palin's pregnancy did not initiate a national discussion about the issue of teen pregnancy, unprotected sex or promiscuous fornication outside of wedlock. Instead, conservative leaders insisted it was off-limits as a topic, with no less than the leader of the Christian Coalition telling reporters, "I think it's a very private matter." Now imagine if instead of Palin's teenage daughter being pregnant, it was Obama's teenage daughter. Can anyone seriously insist that such a situation wouldn't prompt a wave of vitriolic attacks on African-American "culture" and "irresponsible pathologies"?

Of course not. As the author Tim Wise put it:

White privilege is when you can get pregnant at seventeen like Bristol Palin and everyone is quick to insist that your life and that of your family is a personal matter, and that no one has a right to judge you or your parents, because “every family has challenges,” even as black and Latino families with similar “challenges” are regularly typified as irresponsible, pathological and arbiters of social decay.

To reiterate: This persistent double standard of racism and White Privilege doesn't mean all criticism of Obama is rooted in bigotry. It simply means that A) at least some of that criticism is and B) that over the long haul, that double standard distorts our politics in ways that run counter to the American ideals of equal opportunity. If the first step to recovery is to stop denying a problem, then acknowledging this bigotry is the first step to finally ending it.