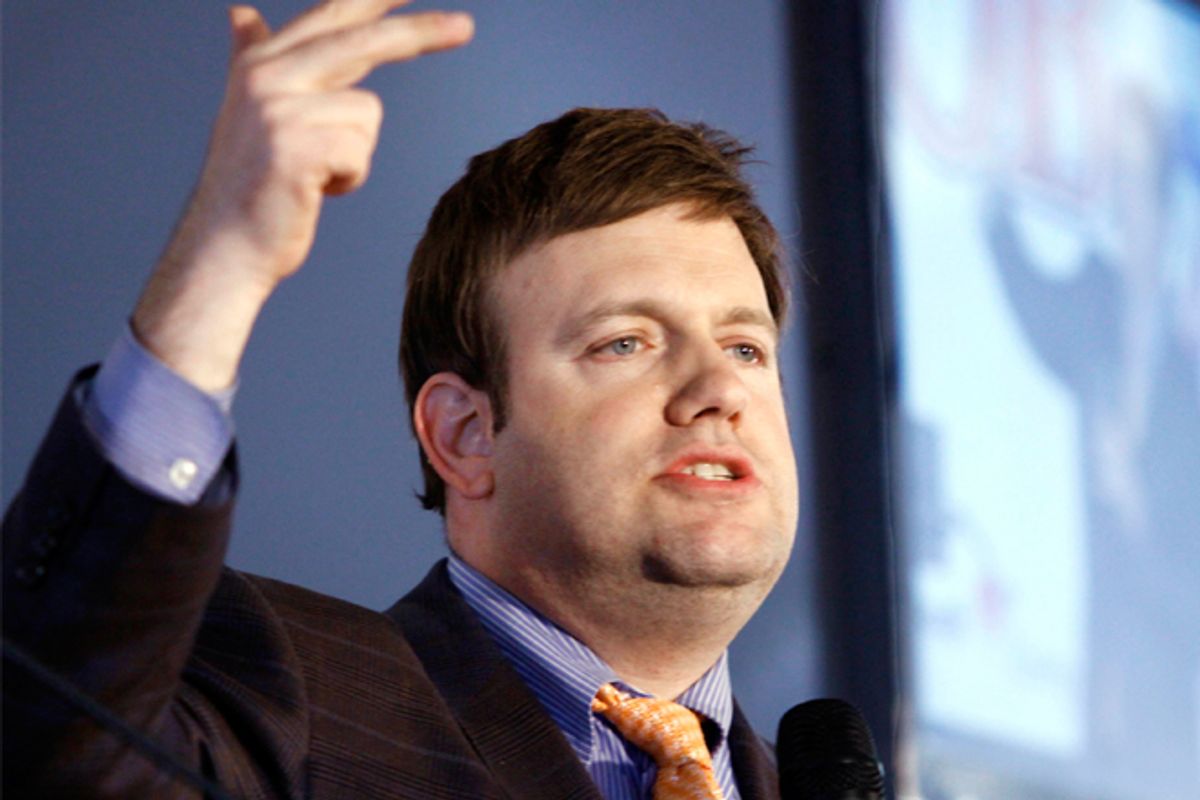 The official pollster of Fox News, Frank Luntz, is the man who renamed the estate tax the "death tax" and told Republicans to lie and call healthcare reform a "government takeover" of the medical system. It turns out he's also the guy who tested anti-Obama films, including one that features photoshopped "nude" photos of President Obama's mother and depicts her as possibly a prostitute, for a shadowy GOP donor. Now DVDs of the scurrilous film, "Dreams from My Real Father," are finding their way into mailboxes in swing states.

(Update: Somehow I missed that he had been hired by CBS News in September to do election analysis.)

But the lurid anti-Obama film is showing up mailboxes in Ohio and Florida. It purports that Obama's real father is the leftist Frank Marshall Davis, and it claims to have found photos of Ann Dunham in bondage magazines. It's the creation of Joel Gilbert, reports Jeremy Peters in the New York Times, a conservative who has claimed he found Elvis Presley alive in a witness protection program and that Paul McCartney is actually dead. Gilbert wouldn't disclose the donors behind his film and its distribution though he claimed he was sending out four million copies. He taunted Peters for being part of a mainstream media that hasn't adequately vetted Obama, saying “I hope you’re not angry or jealous that I beat you to it and might win the Pulitzer Prize.”

Luntz claimed his client had doubts about the political wisdom of backing the Gilbert film, and that their approach to Luntz's work was “I want to know if it’s as bad as I think it is." Still, the idea that the Fox News consultant is part of testing the most lurid anti-Obama messages in a season full of them is kind of appalling. But it shouldn't be surprising.

Luntz used to be a more mainstream figure, even polling for MSNBC in 2003 and 2004. But the network dropped him because of complaints about his partisanship. Although he claimed not to be working for Republican politicians, Josh Marshall and Media Matters reported that he still had GOP clients. This great Salon profile revealed that he was reprimanded by the American Association for Public Opinion Research for his work with the House GOP on its "Contract with America." Luntz repeatedly told reporters that all planks in the contract had at least 60 percent support with the American people. When a member of AAPOR asked to see Luntz's research, he declined, citing his clients' right to confidentiality. He was formally reprimanded by the organization for his lack of transparency. More recently, he represented banks and mortgage companies trying to defeat new federal regulation and the Dodd-Frank bill.

That Luntz would take money to test such garbage shows the depths to which mainstream Republicans are going in their effort to defeat Obama.