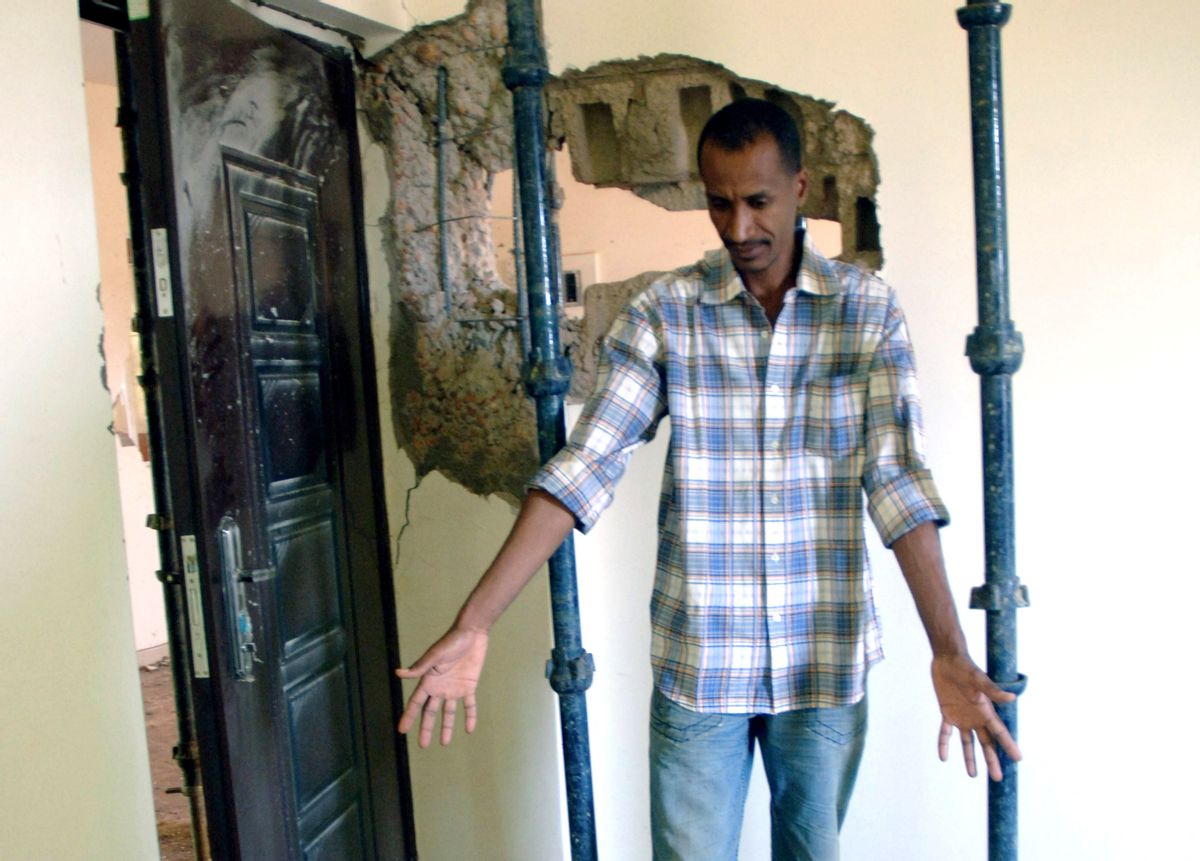 A Sudanese man shows damages in his home caused by an artillery shell in Khartoum, Sudan. (AP/Abd Raouf)
--

The Sudanese government on Wednesday accused Israel of carrying out an air strike on an arms factory in Khartoum, following explosions which killed two people.

Sudanese Culture and Information Minister Ahmed Bilal Osman said four Israeli planes had attacked the factory, according to the BBC.

"Sudan reserves the right to strike back at Israel," said Osman, claiming that rocket debris and other material on the site showed Israel was involved.

BBC correspondents said Israel believes that weapons are being smuggled through Sudan to Gaza, and leaked documents from the US State Department three years ago suggested that Sudan was supplying arms to Hamas.

According to witnesses, a huge fire broke out on Tuesday night at the Yarmouk arms factory in south Khartoum. Several explosions rocked the complex, which is Sudan's main factory for ammunition and small arms, according to Reuters.

Osman, the information minister, also mentioned an attack on an arms convoy in eastern Sudan's Red Sea province in 2009, which the government blamed on Israel.

"We are now certain that this flagrant attack was authorized by the same state of Israel. The main purpose is to frustrate our military capabilities and stop any development there and ultimately weaken our national sovereignty," he said, according to the Associated Press.

If the attack was perpetrated by Israel, GlobalPost's correspondent there, Noga Tarnopolsky, believes she may have seen the planes fly overhead. In an e-mail, she wrote:

"I think I actually saw the planes. I was near the Dead Sea. Four war planes in precise formation blasted above, unusually low, and I assumed they were headed to Gaza.... The planes were racing along the Syrian-African Rift Valley headed south and it was unusual enough that eveybody stretched upwards to look, and several guys down on the ground reached up as if to wave on the planes."

An Al Jazeera correspondent reporting from Khartoum said several other eyewitnesses reported seeing a plane pass overhead before the explosions.