What "health of the mother" means

When cancer was suspected during my pregnancy, I faced a decision no woman wants -- and few politicians understand 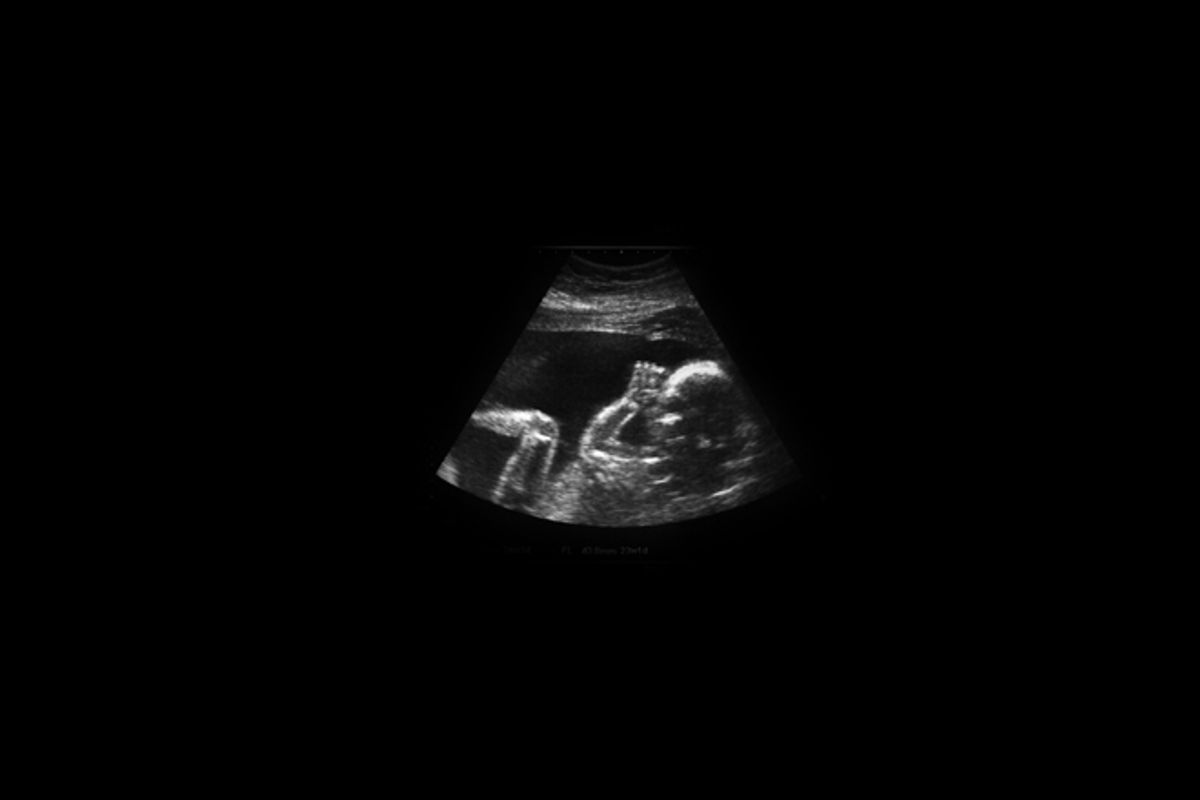 Twelve weeks into my pregnancy, my spouse and I were delighted to see our “bean” on ultrasound. We thrilled to the sight of a four-chambered squeezing heart, an enormous head, and tiny, thrashing limbs. When the technician glimpsed an unusual growth on my ovary, we barely paid attention. Only a biopsy could determine what those bulbous shadows in the ultrasound were, but the doctor explained it was either a benign cyst (very likely) or cancer (very unlikely). The chances that the biopsy would result in miscarriage were slightly greater than the odds that the growth would threaten my health if left alone. Buoyed by the doctor’s assurances that the baby looked great, we decided the biopsy was a bad bet.

At the ultrasound eight weeks later, we laughed when we found out the baby was a girl. Her older sister was vibrating in anticipation of learning her sibling’s gender and entirely unprepared to accept the possibility of a little brother. The ultrasound technician found nothing troubling when she scanned the baby’s anatomy. Turning her attention to my ovaries, though, she saw a black circle that she couldn’t interpret. When they told me I could get dressed before the doctor came to talk to us, my spouse and I exchanged an anxious look: They never let you put your pants back on. The cyst on my ovary had grown significantly, it seemed, and now they thought they saw another growth on the other ovary, developments that could put my health and the baby’s at risk.

We scrambled through a wrenching week of anxious phone calls, hospitals, insurance headaches, and ultrasounds that were by turns frightening and reassuring. Sometimes it seemed as though we were in the middle of a real crisis, so numbed by shock that we couldn’t understand what was happening. At other times, it seemed as though we were at the top of a molehill raised to great heights by medicine. The end of the line was a gynecologic oncologist’s office. In the waiting room, my visibly pregnant body sparked looks of confusion and hopeful smiles from women suffering the intertwined effects of cancer and chemotherapy.

Finally, the oncologist explained that ovarian cancer was rare among women in their 30s, but that the tests they had done were inconclusive. More alarmingly, he said that if a biopsy revealed a malignancy, it would not be possible to treat the cancer effectively without terminating the pregnancy.

None of our options seemed good. I could get the biopsy, have the relief of a benign result, but suffer a miscarriage. I could get the biopsy, face a malignant result, and have to weigh my life against my child’s in even starker terms. I could skip the biopsy, only to discover later that cancer had gone untreated for months, possibly putting both the baby’s and my life at risk. Whichever way we went, everything we cared about was on the line.

We wanted more information, and the oncologist ordered one more test, an MRI. The loud banging of the magnets imaging our future made the baby jump like a toddler trying to escape her mother’s lap. Then, less than 24 hours later, the oncologist called: “I do not believe you need me now, and I hope that you never need me.” Only a biopsy could provide certainty, he reminded us. We decided that we didn’t want or need to know for sure. It seemed like the crisis had passed.

But the oncologist turned out to be wrong. At 36 weeks pregnant, my placenta tore loose from my uterus, and a life-threatening hemorrhage sent me careening into the operating room for an emergency C-section. The last thing I heard before the anesthesia kicked in was a nurse saying she could not find the baby’s heartbeat. When the obstetrician made her hurried incision, she saw my ovary glued to my uterus with cancer. After she stopped the blood loss, she called in a gynecologic oncologist to address the cancer that had probably precipitated it. In a painstaking eight-hour surgery, he found cancer everywhere from my rectum to my diaphragm. Amazingly, our daughter suffered no long-term ill effects from our shared near-death experience, though I still nurse its scars.

If I could go back to those sickening, decisive moments in the middle of my pregnancy with the full understanding of what I know now, I cannot say with any certainty what I would do. There are too many competing obligations that cannot be fully reconciled. Too many people who need me. Too many people whom I need.

I have learned that there is a significant survival advantage to diagnosing ovarian cancer early. Women diagnosed when the disease is confined to the pelvis have at least twice the chance of surviving five years than those diagnosed after the cancer has spread throughout the abdomen. If those risks seem insignificant compared to the potential life of a fetus at 20 weeks gestation, you must understand that I shook with relief when my oncologist put my chances of suffering a recurrence (and near-certain death) at 70 to 80 percent rather than the 90 percent I had thought.

It haunts me to think of my husband as a single father. Even given our economic and social privilege, raising two children by himself will tax his psychic and financial resources. It horrifies me to think of my daughters without a mother. When I travel for work, my 4-year-old weeps and tucks the notes I leave behind into her special blankie. It saddens me to think of my parents without their daughter. My mother, who eagerly speculated about how a fourth grandchild would change her understanding of genetic variation, pleaded with me not to dismiss the threat of cancer, not to jeopardize her child’s life.  I don’t want any of them to live in a world without me.

But I now know my baby, too. Because she is here, I do not want to live in a world without her. Eighteen pounds of fleshy velocity, curling hair, and two sharp teeth, her existence is no small consolation for a diagnosis that, whether sooner or later, would still have come. In the mornings, she stands in the middle of the kitchen, waving a cloth napkin and shrieking at me to look. In the evenings, she and her older sister fall to the floor in tangled abandon, and their indistinguishable laughs remind me of the pleasures of having a sister. When my spouse holds her, I can see how much she resembles him and how she has made him into a different kind of man, one who can withstand nonsensical screams of outrage with equal parts compassion and detachment.

It is good for me to be here, just as it is good for her to be here. I still do not know how to reconcile those two things. My body, our body, nourished her nascent life but also the disease that is trying to take mine. It is an unthinkable calculus, both now, when we are in possession of facts we could not have known, and a year ago, when we acted based on the best information we could get.

Ultimately, I was spared from having to make an impossible choice. Although I do not know whether it was right to forgo the biopsy or what I would have done if I’d learned of my cancer earlier, I do know that both decisions were mine to make. I came to the present tormented and joyful moment in my life with informed consent about the risks I was taking. The full knowledge that both of our lives were in my hands, and that we might not both get out alive, made that consent meaningful. To disregard the impact of my possible sickness and death on my family was, to me, just as problematic as terminating my pregnancy. Had I been a single mother or had my job been a financial necessity for my family, I might well have weighed my choices differently. I might not have been able to take the chances that came along with skipping the biopsy. It is painful to imagine how I would feel, now, if the choice had been out of my hands—or if it had been so sharply circumscribed that it was clear that it was mine only in form, not substance.

I wonder whether mine is the kind of case politicians have in mind when they talk vaguely about outlawing abortion with exceptions for the health of the mother. There was disagreement among experts about whether continuing my pregnancy threatened my life, what kinds of treatment for cancer during pregnancy would be possible, and whether treatment would dramatically alter my chances of survival or my baby’s. Politicians like Rep. Joe Walsh, R-Ill., who glibly stated recently that there is no such thing as a medically necessary abortion, seem little aware of how devastating situations like mine can be. No one other than the women and families who will live with the consequences should make those heartbreaking choices.

My case is rare. Indeed, only one in 1,000 pregnancies coincide with a cancer diagnosis. But I think that’s why my story matters: It underscores how difficult such dilemmas can be. It illustrates how important the promise of choice can be, especially when the decisions at hand are not the ones we wanted to make. Mothers whose impossible choices unfold in the midst of educational, financial, and social disadvantages for which they are not responsible are granted little mercy in our public discourse about reproductive choice. That is a shame, because my experience has taught me that we’re all doing the best we can in situations beyond our control. That is how we live into the next day, in hope and humility.

But humility is in short supply in a public debate on reproductive rights that favors sound bites and unyielding absolutes. These are decisions that call for uncommon emotional and ethical depth. Abortion is a complex ethical issue, one that tests the limits of our beliefs about autonomy and responsibility to others. It is never a good choice, but it may sometimes be the right choice. Just as that is true for the women who face such a choice, it is also true for us as a culture. We can understand abortion as fraught and respect those women who choose it as painfully cognizant of that very fact. If the women in situations like mine wrestle to make the best choices we can, then how can anyone — particularly extraordinarily privileged (and overwhelmingly male) judges and politicians — presume to make them for us?

I hope that my daughters will one day read this essay as their mother’s defense of both of them. I hope that they live in a world that respects their inherent dignity. Whatever impossible choices they face, I want them to know that I trust them to make those decisions on their own. Suzanne Edwards is assistant professor in the English department at Lehigh University.