In the long run, economic growth abroad will reverse the trend of income stagnation in the U.S. 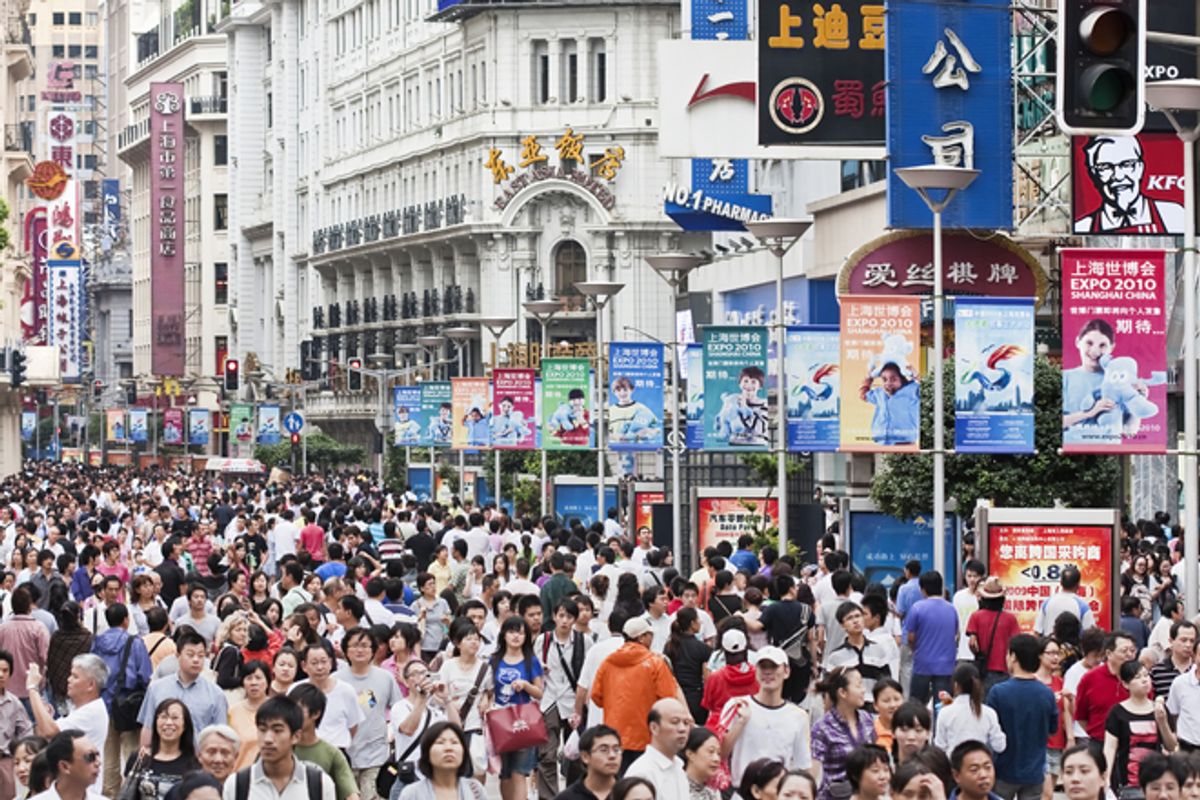 There's an easy answer to the question of why Barack Obama and Mitt Romney continue to trade jabs over who will be meaner to China over the next four years. It's called Ohio. Free trade does not focus group well in the all-important Midwestern electoral prize. When votes are at stake in Toledo and Cleveland and Akron and Cincinnati, presidential candidates will pander like they've never pandered before.

But there's a deeper discontent at work nationwide that plays into the same dynamic, aptly identified by David Leonhardt in Wednesday's New York Times. For most Americans, our standard of living is stagnating, or in outright decline, and one of the villains is globalization. So when Romney declares that he will label China a "currency manipulator" on "Day One" and Obama touts his record of cracking down on cheap Chinese tires, what the candidates are really doing is blaming the most convenient boogeyman for a profound change in how Americans feel about the future.

“The whole notion of the American dream,” said Frank Levy, an M.I.T. economist, “described a mass upward mobility that is just a lot harder to achieve right now.”

That's a hard pill to swallow, and it's very convenient to imagine that it's all China's fault. And to some extent, bolstered by recent academic research, it's true. Outsourcing to China has had a negative impact on specific sectors of the U.S. economy.

But there's a flip side to this story -- the incredible rise in the standard of living of the hundreds of million of Chinese and Indians and Brazilians who have benefited far more from globalization than Americans (or Europeans) have lost. You will never hear Obama or Romney mention this point while on the stump in Ohio, but the net gains from global trade for the world are undeniable.

This fact is cold comfort to unemployed Americans whose next job will pay less than their former job. It will make no difference to the current election. There is also little doubt that the gains from trade aren't distributed fairly -- whether in China or the U.S. But in the long run, burgeoning prosperity in the (formerly) developing world should redound to the benefit of workers in the West. Billions of Chinese and India consumers will float everyone's boats.

And here's the thing: The long run might be a lot closer than we think. Via Quartz comes the news that JPMorgan analysts have concluded that Chinese wages are now equivalent to Mexico's.

In 2000, Mexican manufacturing labor was more than three times as expensive as Chinese. But after of decade of stagnant wages in Mexico and a sustained rise in China, Chinese labor is no longer cheap. In fact, it costs almost the same amount to hire Mexican workers, JP Morgan economists write. That turnaround -- along with other factors, such as the surging costs of transporting finished goods in recent years -- helped drive Mexico’s share of US manufacturing imports to nearly 15 percent in 2012, up from a 10-year low of 11.2 percent in 2005.... [And] those workers’ rising wages have helped make consumer spending in China a bit more resilient. For instance, retail sales bounced a better-than-expected 14.2 percent in September, compared to the prior year. That’s a welcome sign for those hoping to see the global economy emerge from the Great Recession with more balance between emerging-market producers and developed-market consumption.

There is an argument to be made that the North American Free Trade Agreement never delivered all the benefits to both sides that it should have because China spoiled the party. Mexico's comparative advantage was gutted by China's explosion onto the world trade scene, a fact that led to all kinds of unforeseen consequences. For example, Mexico's failure to grow as expected likely contributed to the surge of illegal immigration that continued right up until the financial crash.

The rise in the standard of living in China eases its competitive advantage over Mexico, which in turn will give Mexico more room to grow and close the vast economic gap between the U.S. and Mexico. Over time, the same dynamic will play out globally. Chinese tires won't be so cheap. Mexicans will be more likely to stay home. Americans will start to benefit more from trade as consumers from around the world look to upgrade their lifestyle.

Again, the long view offers little to a voter in Ohio today. But the future is closer than we think and might not be so glum as present circumstances hint.