Why Mourdock's rape talk is no surprise 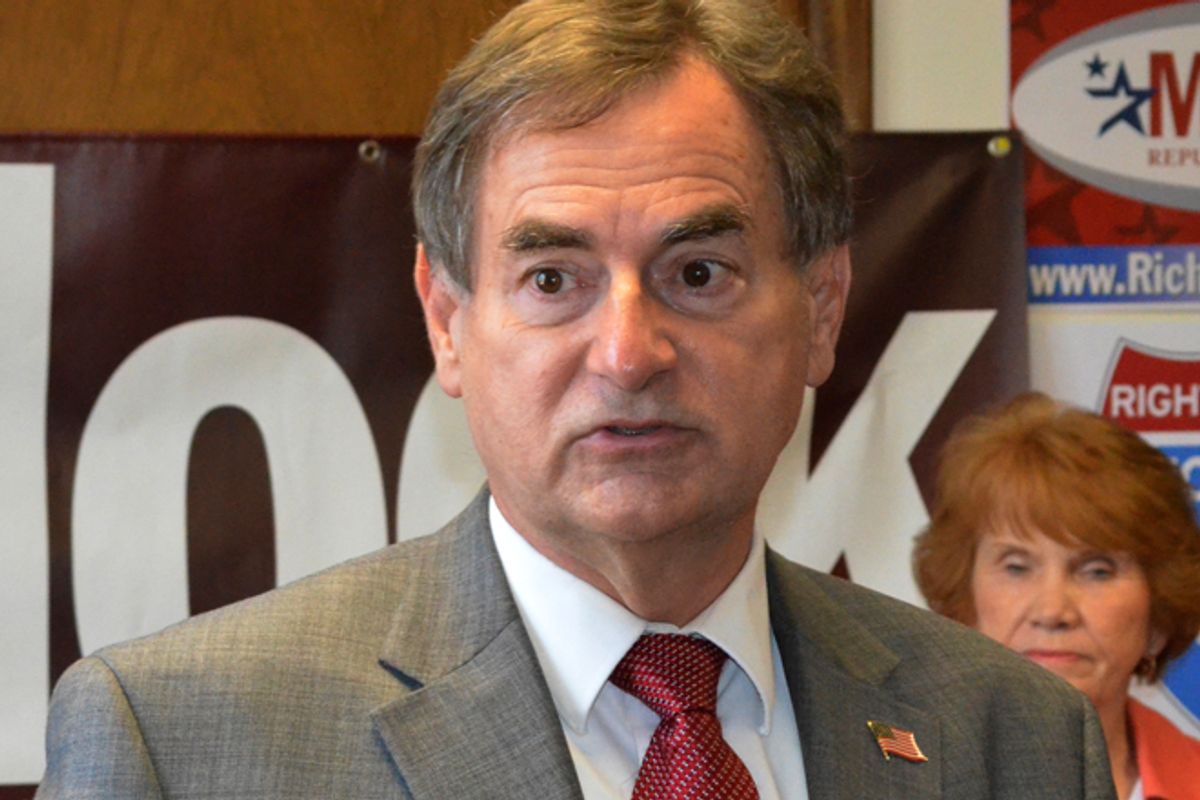 Indiana Republican Senate candidate Richard Mourdock shocked the political world last night with his comments suggesting that women being raped is all part of God's plan. But should we really be surprised? As Irin Carmon has already noted, this notion is actually pretty common in today’s GOP. Moreover, even a cursory glance at Mourdock's past shows he's an extreme right-winger in the Todd Akin mold.

Few people were paying attention to Mourdock's Senate run until 8 o'clock last night. Indiana’s Senate race has always been close, and thus critical to control of the Senate, but it’s never attracted anywhere the attention of other races like Missouri’s or Massachusetts’. True, he attracted some attention earlier this year by defeating longtime moderate Republican Sen. Dick Lugar in a bitter GOP primary where lots of conservative groups like the NRA, the Club for Growth and Sen. Jim DeMint poured money into Mourdock's campaign. Lugar was known as one of the few remaining senators willing to work across party lines to get things done, but Mourdock proudly declared that he has no such designs. “I certainly think bipartisanship ought to consist of Democrats coming to the Republican point of view,” he told MSNBC shortly after winning the primary in May. In fact, that was sort of his whole shtick in the primary. The Republican National Senatorial Committee supposedly took over his campaign at that point and kept him pretty well muzzled for most of the summer, when he was notably absent from cable news and out of most national media.

But before that happened, he had enough time to say lots of things that should raise anyone's eyebrows. Once, he compared poor people not paying federal income tax to the Civil War. After mentioning Abraham Lincoln’s “House Divided speech,” Mourdock said, “I am here to suggest to you that we are in a house divided. You know this past April, when our federal taxes were paid, 47 percent -- 47 percent -- of all American households paid no income tax.” He later defended the comments. His website states: “He believes that Roe v. Wade represents a serious misreading of the original intent of those who established our Constitution.”

He's suggested that he would filibuster Supreme Court nominees who aren’t like Robert Bork, the failed arch-conservative Supreme Court nominee. This is the same Bork who called the 1964 Civil Rights Act “unsurpassed ugliness”; who said it was “utterly specious” to suggest that women have a right to contraception; who said just last year that it’s “silly” to think women are discriminated against.

Mourdock recently visited a controversial Baptist church that, as a powerful CNN feature last year revealed, subjects its students to such sadistic corporal punishment that it’s hard to call it anything but child abuse. Even more troubling, one former student recounted how he was raped over a period of years at the church and the pastor did nothing when the boy brought it to his attention. Mourdock spoke at the church one day and accepted the pastor’s enthusiastic endorsement.

He’s even suggested that the entire social safety net is unconstitutional. “I challenge you in Article I, Section 8 of the United States Constitution. where those so-called enumerated powers are listed, I challenge you to find words that talk about ‘Medicare’ or ‘Medicaid’ or, yes, even ‘Social Security,’” he said at a Tea Party rally. (His campaign website promises he’ll “preserve Social Security and Medicare” by adopting Paul Ryan’s plan.)

This is a guy whom Lugar has refused to campaign for in the general because he’s too extreme. In a concession statement Lugar said of Mourdock, “In effect, what he has promised in this campaign is reflexive votes for a rejectionist orthodoxy and rigid opposition to the actions and proposals of the other party.” John Danforth, a longtime former GOP senator from Missouri who also served as George W. Bush’s ambassador to the U.N., told the New York Times in 2010: “If Dick Lugar, having served five terms in the U.S. Senate and being the most respected person in the Senate and the leading authority on foreign policy, is seriously challenged by anybody in the Republican Party, we have gone so far overboard that we are beyond redemption.”

But here’s the really crazy thing about Mourdock: Most of his views are not outside the mainstream of the GOP. Mitt Romney made Robert Bork a legal adviser to his campaign, Mitt Romney has had his own run-in with the 47 percent, and plenty of Republicans think abortions should be outlawed, even in cases of rape.