How GOP voter suppression could win Florida for Romney

How many Florida Democrats will be disenfranchised by the GOP's war on voting? Enough to swing the election 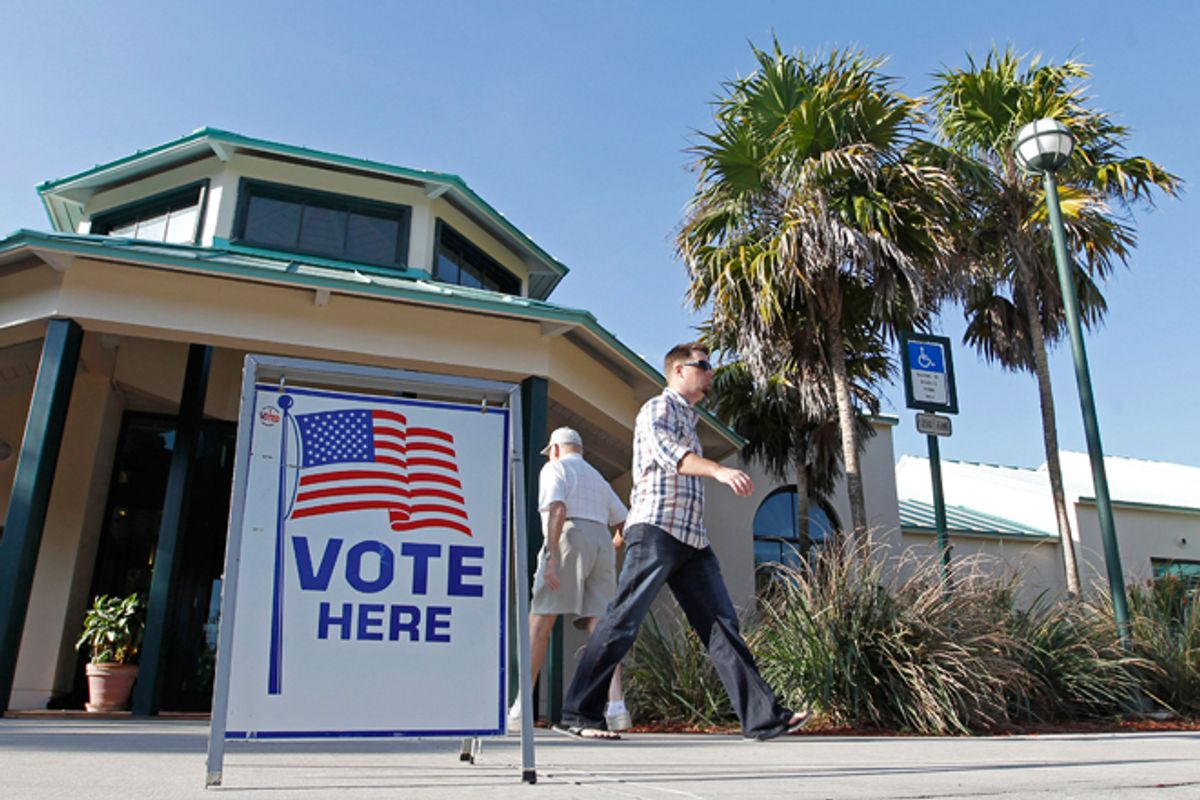 You might think being responsible for arguably the worst election debacle in American history, in 2000, would have spurred Florida's politicians to make the state the nation’s model for excellence in election administration. But in the past few years state Republicans, from Gov. Rick Scott on down, have worked tirelessly to come up with ways to limit the number of voters -- overwhelmingly, Democratic voters -- able to cast ballots on Nov. 6. And, with President Obama and Mitt Romney effectively tied for the state's crucial 29 electoral votes, these restrictions could end up determining who wins the presidency. In 2000, the contest came down to 537 votes; the number of people who may already have been left out of the process or will be by election day dwarfs that number many times over.

In 2011, Republican Gov. Rick Scott and a compliant GOP-dominated state Legislature passed a law limiting early voting to a maximum of 96 hours over eight days. One effect of this was to eliminate early voting the Sunday before the election Why is that significant? African-American churches, it is well known, have made a tradition of going as a congregation to early voting sites to vote on that day.  In 2008, early voting lasted a total of 120 hours over 14 days and African-Americans utilized it in huge numbers: 54 percent of Florida’s black voters, overwhelmingly Obama supporters, voted early — twice the rate of white voters -- and Obama won Florida.

A clue to Republican thinking was provided by a state senator, Michael Bennett, who made this argument in support of the early-voting law:  “We all want everybody to vote. But we want an informed voter ... Voting is a privilege. How easy should it be? ... Why would we make it any easier? I want ’em to fight for it. I want ’em to know what it’s like. I want them to go down there, and have to walk across town to go over and vote.”

The U.S. District Court in Washington, D.C., recently rejected the early voting change in the five counties covered by the Voting Rights Act, which requires that either the Department of Justice or the D.C. Court approve election changes in jurisdictions with a history of discrimination before they are implemented.  The judge ruled that the changes would have the effect of keeping minorities from going to the polls. A compromise has been reached with respect to those five counties, but the rule remains in place for most of the state.  It is unclear how much that will reduce turnout, but chances are it will be by more than 537 votes.

Florida Republicans launched their plan to make voting harder in 2011 when they effectively shut down community-based voter registration drives, responsible for registering hundreds of thousands of new voters every year. The Legislature and governor pushed through a law imposing onerous requirements and procedures on organizations seeking to conduct voter registration drives and steep fines for noncompliance. Nefarious outfits such as the League of Women Voters and Rock the Vote were forced to completely shut down their registration activities.  At the same time, a teacher who brought registration forms into class for her seniors turning 18 was charged with violating the law.

What made the change in the voter registration law so particularly suspicious is that community groups focus most often on youth and minority and low-income communities, whose opportunities to register are more limited. In 2008, for example, while only 6.3 percent of white Floridians registered to vote through registration drives,  12.1 percent of Latinos and 12.7 percent of African-Americans did.

A judge recently put a halt to the new requirements, ruling them “burdensome" and "harsh and impractical,” not to mention unconstitutional. But the damage has been done – mostly to Democratic voters. The number of Democrats in the state who were registered to vote increased by only 11,365 voters from July 1, 2011, to August 1, 2012. In 2004, nearly 159,000 new Democrats were registered in that period. In 2008, the number was nearly 260,000. Remember: 537 votes.

Perhaps the most serious curb on voting, though, has to do with felon disenfranchisement.  Since the election of Rick Scott, state law regarding felons' voting rights has become perhaps the harshest of any in the country. New rules require that all individuals who have completed their sentences, even those for nonviolent offenses, must wait at least five years before they may apply to the Clemency Board to get their voting rights back (and something as simple as a mistaken arrest can reset that five-year clock).  But applying doesn’t mean one will be able to vote any time soon.  The ACLU of Florida estimates a backlog of at least 100,000 Americans who have applied to the governor’s board but had no action taken on their application.

Florida disenfranchises more citizens through its felon disenfranchisement law than any other state in the nation. The Sentencing Project says there are about 1.3 million disenfranchised ex-felons in Florida. One-quarter of African-American voting age men in Florida will be excluded from this election because of this antiquated and anachronistic rule. And as we know, for a number of reasons, a majority of ex-felons are African-American and Latino – and thus more likely to vote Democratic.

But the governor and his secretary of state, Ken Detzner (distant successor to the notorious Katherine Harris), have not stopped at taking ex-felons out of the game. Most recently they ransacked the registration list to identify non-citizens that might be registered. Initially, they claimed thousands of such voters were on the rolls, but that estimate was based on wildly flawed data, and the list has since been whittled down to 198 -- and it isn’t even clear if that number is accurate!  As if in today’s climate around immigrants, non-citizens are just jumping at the chance to officially register with the government and go to a polling place and publicly identify themselves to a representative of the government!  In the meantime, a number of perfectly eligible citizens have been forced to come forward and prove they are indeed citizens.

If the non-citizen purge, just weeks before the election, was out of concern for the integrity of the vote, one assumes the governor and his secretary of state would have found the time to do it earlier.  The effect, meanwhile, could well be to intimidate and deter people from voting this year, especially, perhaps, naturalized citizens.

Add to these concerted attempts by Florida state officials to keep certain populations from voting the activities of groups connected to True the Vote, a Tea Party-linked organization bent on mounting mass challenges to voters around the country at the polls based on obviously flawed and flimsy information.  Tampa Vote Fair, an affiliated group, has already started challenging the right of certain voters to be on the registration list and plans to challenge voters at the polls.  Other organizations have been compiling lists of voters in a number of counties they claim are ineligible, which no doubt they'll use when they deploy monitors  on Election Day.

Florida needs to stop making itself the epicenter of battles for the right to vote every two years. Instead, the state should strive to increase the number of Floridians – from all walks of life -- able to vote, and stop using the power of government to game the system and help the GOP.

Meanwhile, we can only hope the presidential election doesn't come down to Florida -- again.

Tova Andrea Wang is a fellow at Demos and the author of "The Politics of Voter Suppression."