I was a music snob, until I fell for One Direction 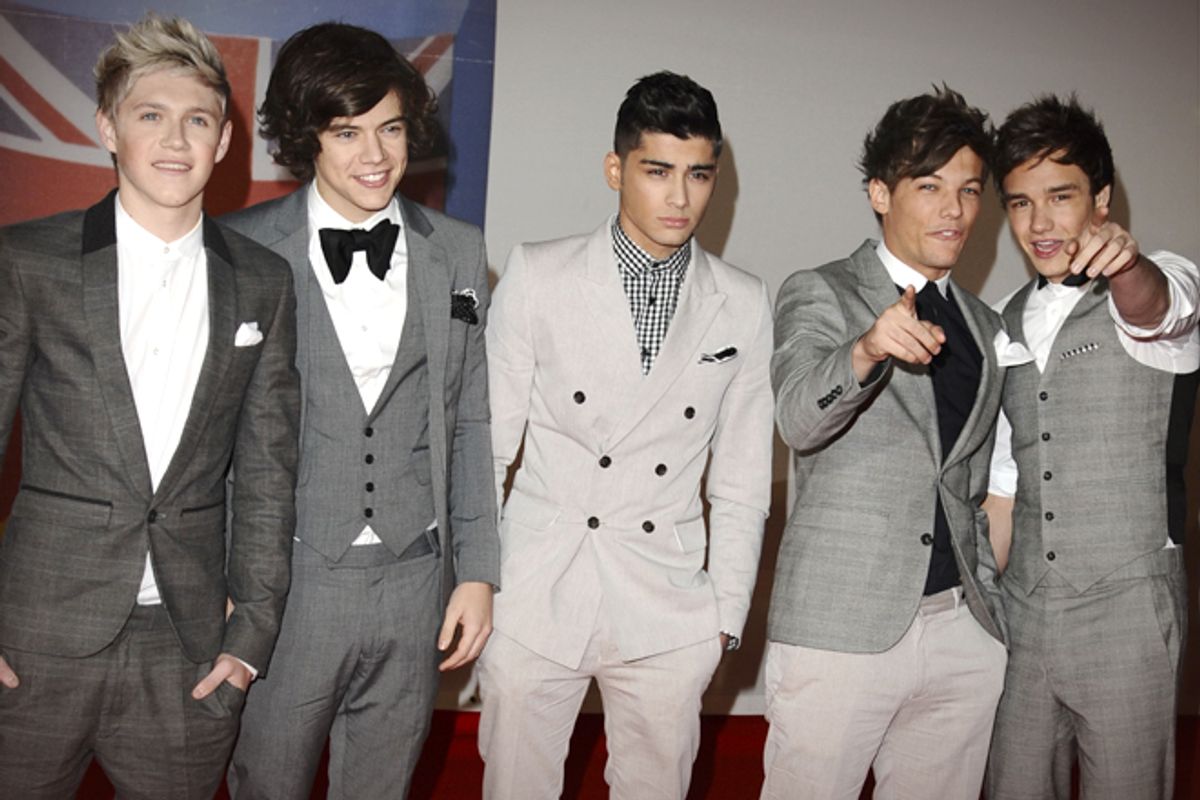 I have two embarrassing admissions to make: One, I discovered that there is a benefit to the erosion of privacy that social media affords. I was in pursuit of the perfect boyfriend, and I thought I found him, in the Georgetown University library: We’ll call him Tucker. But before I asked my crush out on a date, I had to vet him a little: I had to know what kind of music he liked, so I peeked on his Facebook page. Which brings me to my second, more important admission: This was how I found out about One Direction. A British boy band! Did he like them ironically? Who in college listens to boy bands? It hardly matters, because I never fell for Tucker. But I did fall for One Direction – a piece of good fortune for which I will always owe him a profound debt.

Before meeting Tucker, I had heard of One Direction in the way I had heard of NAFTA – which is to say, I could tell you what it was in a vague, unhelpful way. But Tucker’s passion for the musical act spurred me, one quiet weeknight, to give them a listen.

Now, it may seem like no big deal, a college senior expanding my musical horizons. But I should say here that for most of my life, I’ve listened to the standard blue-chip fare many people are drawn to in high school. My iPod contains Bob Dylan, the Beatles, the Rolling Stones, and all the other classic rock that is nearly impossible for anyone to dislike. I’ve always played it safe, traditional – to an almost self-conscious degree. And, I confess: I’m guilty of passing quick judgment on anything that seems too of-the-moment, too corporate, too popular with Top 40 radio stations. What can I say, I'm a music elitist. Or was. One Direction changed me.

It began with a YouTube video of the group performing Elton John’s “Something About the Way You Look Tonight” on the British talent show "The X-Factor." If there is an auditory equivalent of love at first sight, then that's what happened. One Direction didn’t just cover the song; they transformed it. Where Elton John was nostalgic and even melodramatic, One Direction was playful and innocent and earnest. To this day – and I’m not proud of this – watching the clip can move me to tears.

What is it that makes a fan? I’ve never been much of a fan of anything. Perhaps my elitism is what has kept me from being one, believing myself to be above the kind of middlebrow obsession that fandom demands. When you’re a fan, you love more than just the sound. You love what the band represents, its idiosyncrasies, its deficits, its collective personality – flaws and all. A fan is a practitioner of unconditional, unrequited love — it can be a full-on commitment. Speaking near the end of Cameron Crowe’s 2000 rock film "Almost Famous," a groupie on the bus says it best, distinguishes the hangers-on from the truly loyal. “I mean, they don’t even know what it is to be a fan,” she says. “You know, to truly love some silly little piece of music or some band so much … that it hurts.”

But I got over myself, thanks to One Direction. I could go on about the group for far too long. But the takeaway here is that even the most hardened cynics are susceptible to the charisma of a wonderful group of singers. And boy, are they wonderful.

It’s tempting to mock the bubblegum pop sound of groups like these. But a quick listen to One Direction’s debut album "Up All Night" reveals a repertoire of stunning depth for a band so young. The most impressive track for me remains a ballad called “Moments,” which describes losing a girlfriend to circumstances beyond one’s control. It’s unclear, based on the lyrics, what exactly those circumstances are, but Liam Payne's resonant voice sings this melancholy refrain: "Close the door / Throw the key / Don't wanna be reminded / Don't wanna be seen / Don't wanna be without you / My judgment’s clouded / Like tonight's sky."

I’ve been a One Direction fan for several months now, and I used to wear this affinity with caution. Barring unbreakable self-confidence, liking a boy band whose primary audience is girls between the ages of 8 and 12 is bound to invite an unsettling amount of ridicule, even from my most nonjudgmental friends. But I’ve given up pretending to be indifferent. I play their music loudly, often and unapologetically in my dorm room – and it’s a terrific, almost rebellious, feeling. I like this band. So deal with it.

Peter Fulham, a freelance writer, has contributed to Slate, CBSNews.com, the Chicago Tribune, and USA Today.