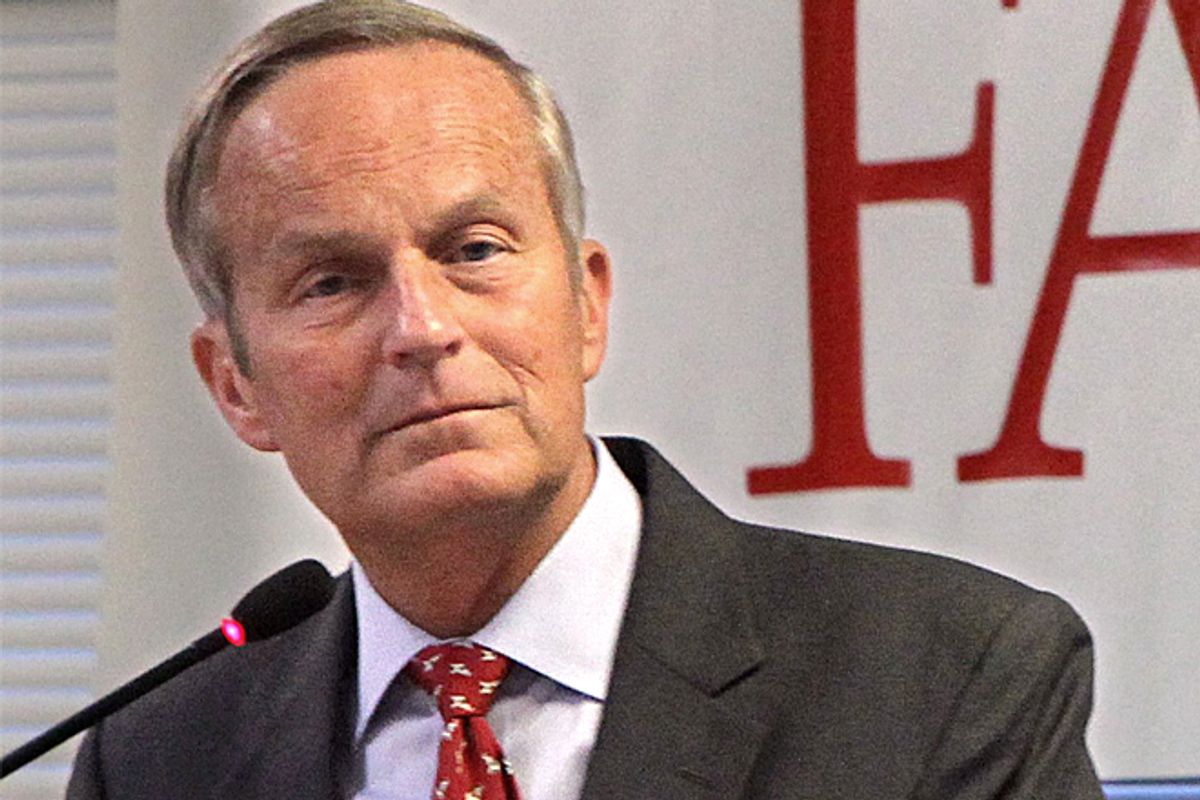 Dreste, as the Riverfront Times described  him, was a “domestic terrorist, religious fanatic, [and] paramilitary right-wing nut." In 1999, Dreste was convicted in federal court of making “true threats to kill, assault or do bodily harm” to abortion doctors. Before that, as we reported, Akin popped up in several groups led by Dreste, who was one of St. Louis' most prominent pro-life activists until his conviction. Dreste was also chaplain in the militia that Akin praised in a letter just a few months before the Oklahoma City bombing.

Now, as it turns out, Akin was one of only a handful of contributors to Dreste’s 1993 run for the Missouri state House. Then-state Rep. Todd Akin’s campaign gave Dreste $200, according to campaign finance records, making him Dreste’s third largest contributor, tied with a pro-life PAC. The records were obtained by Progress Missouri from the secretary of state’s archives and provided to Salon.

Dreste’s campaign brought in only $2,325 in cash contributions that year, so Akin’s donation represents about 8.6 percent of his total haul. There are only seven other itemized donors (those who give under $100 don’t have to listed individually), including two pro-life groups and two other candidate committees. Dreste ran for the state Legislature four times, but 1993, a special election, was his best showing, when he captured 35 percent of the vote.

Defenders of Akin -- Akin spokesman Rick Tyler declined to comment for this story -- might note that Dreste wasn’t convicted for another five years, so Akin couldn’t have known how radical he was in 1993. But Dreste was well known in Missouri at the time for his controversial stunts.

Akin’s contribution came in October of 1993, but in March, “Dreste was the talk of the anti-abortion and abortion-rights camps when, after the murder in 1993 of Dr. David Gunn in Florida, he carried a sign asking, ‘Do You Feel Under the Gunn?’” St. Louis Post-Dispatch columnist Jo Mannies wrote in 1995. Gunn’s murder was a watershed moment in the volatile abortion wars of the decade, but Dreste used it to make an implicit threat against other doctors. Specifically, he showed up outside the clinic of abortion provider Dr. Yogendra Shah with the sign: “Dr. Shah, do you feel under the Gunn?” Mannies also noted: “Wearing a hat adorned with shotgun shells, Tim Dreste is a familiar sight among the anti-abortion protesters who regularly picket the Hope Clinic for Women in Granite City.”

In May of '93, the Post-Dispatch published a controversial letter to the editor from Dreste in which he accused gay people of spreading AIDS-infected blood. “Further, Operation Rescue's leaders have continuously disavowed violence as a means to achieve their goals, while animal-rights groups destroy medical testing facilities and militant homosexuals invade church services and spread AIDS-infected blood in legislative chambers, all the while being cheered on by the left for standing up for their cause,” Dreste wrote.

He concluded: “As this area's leader for Operation Rescue, I have only one response: Throw some extra bunks into Manuel Noriega's and John Gotti's cells; we'll soon join them.” It turned out to be prescient.

Of course, it’s possible that Akin, a committed anti-choice activist who was arrested multiple times while protesting abortion clinics in the 1980s and defended a woman convicted of battery against an abortion nurse, somehow missed all of Dreste’s controversial activities. Sean Soendker Nicholson, the executive director of Progress Missouri, doesn’t think so. "This isn't an isolated incident. No amount of threats of violence or extremism encouraged Akin to cut ties with Dreste."