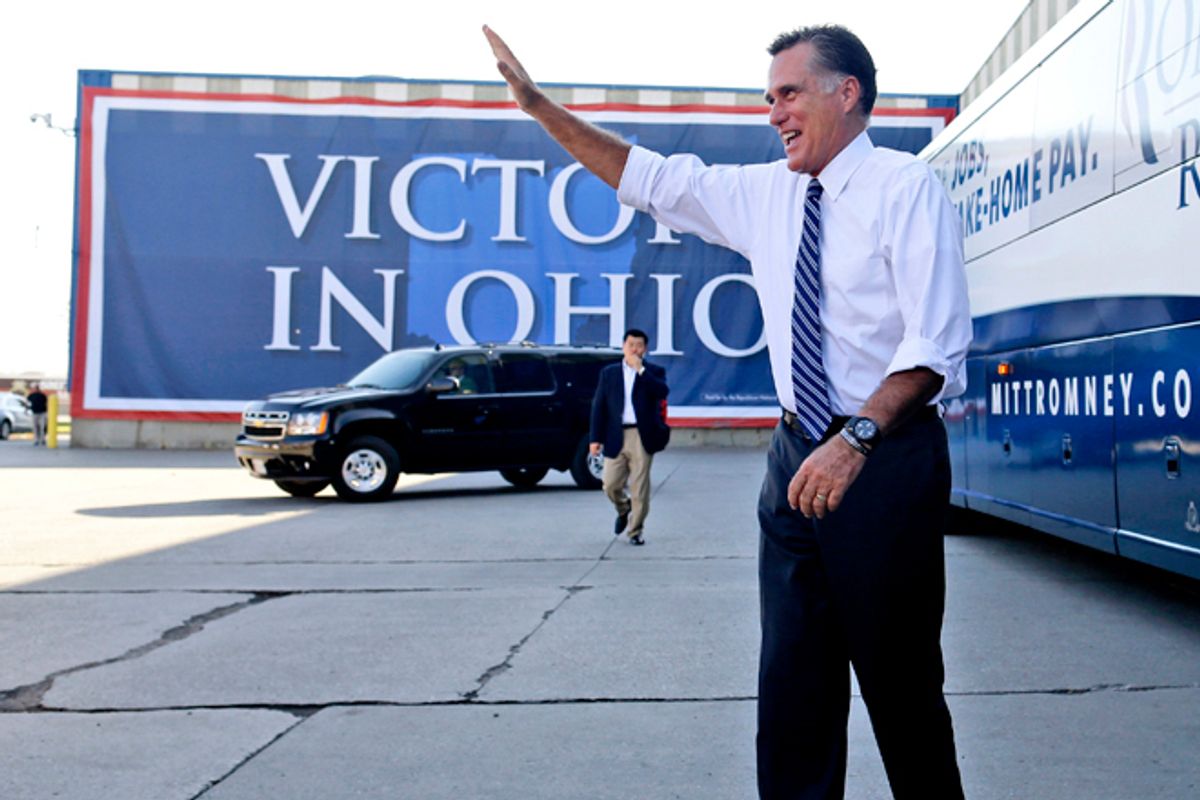 Are Karl Rove and his friends up to their old tricks again in Ohio?

As I report in "Boss Rove: Inside Karl Rove’s Secret Kingdom of Power,"  in 2004 the presidential race ultimately came down to Ohio. Today, with the election neck and neck once again, observers are asking whether the election will rest on a variety of unusual tactics used by the GOP to game the system in favor of the Republicans.

Among the GOP techniques used in 2004, Democrats complained about the unequal distribution of voting machines, which resulted in students at liberal Kenyon College waiting in line for as long as 11 hours while conservative voters at evangelical schools zipped through with no lines at all. There were “caging” tactics to challenge the voter registrations of college students, African-Americans and others who vote heavily Democratic. Republican volunteers known as the Mighty Texas Task Force were widely accused of intimidating would-be Democrat voters.

And there were numerous anomalies that some attributed to a computerized “Man-in-the-Middle” attack made possible by the fact that Secretary of State’s office in Ohio used a firm with strong GOP ties, SmarTech, as the “fail-over” site to handle returns on election night.

The final result? Even though the exit polls had Democrat John Kerry winning Ohio by 4.2 points, in the end George W. Bush emerged victorious.

For the most part, these unusual techniques could be attributed to Kenneth Blackwell, who, as Ohio’s Secretary of State, was charged with overseeing the election in a fair and impartial manner but who also happened to be co-chair of the Bush-Cheney campaign in Ohio, and, as such, was one of Rove’s chief lieutenants. As a result, many people believe Karl Rove stole Ohio to win the 2004 election.

This time around, Rove is not as close personally to Mitt Romney as he was with George W. Bush. But he is still a party boss of sorts — the king of the super PACs, which are funding the political ads that that are flooding the airwaves in Ohio. The Secretary of State of Ohio is Jon A. Husted, a Republican who was a veteran of Rove’s 2004 campaign in that state. Finally, with the race neck and neck on October 26, pundits at Real Clear Politics and elsewhere are speculating that once again the entire race may come down to Ohio.

Already, a number of interesting developments have begun to take place. This time, SmarTech does not have a clearly defined role as it did four years ago. But three days ago, I reported that votes in several counties in Ohio were being counted by Hart Intercivic, a voting machine company linked to the Romney camp, even though a study by the state of Ohio had labeled its voting system a “failure” when it comes to protecting the integrity of elections.

That is not the only questionable happenstance in Ohio. According to a recent report by Reuters, billboards have begun to appear in low-income neighborhoods in Cleveland and elsewhere in Ohio asserting that “Voter Fraud Is a Felony!” punishable by up to three and a half years in prison and a $10,000 fine. According to a Cleveland city councilor, the purpose of the billboard campaign was likely to confuse and intimidate ex-criminals from voting — even though it is perfectly legal for them to do so once they have served their time. “I’m worried they will actually scare some of the ex-offenders, people with felony records who can vote,” said Phyllis Cleveland, whose district includes several of the billboards. She added that there is confusion about felons voting because it is illegal in some states — but not in Ohio, 12 other states and Washington, D.C. The billboards, which are paid for by an anonymous group, have been put up mostly in black and low-income communities that tend to vote heavily Democratic.

Meanwhile, when it comes to restricting absentee voting, which historically has favored Democrats, Secretary of State Jon Husted has been doing his part for the GOP cause. First, in early October, he issued directive 2012-48, ruling that if voters made errors on their absentee ballots, “Notification may not be made via telephone, email, facsimile or any other means.” In other words, because the error will stand uncorrected, their vote may be disqualified — a ruling that is likely to hurt Democrats since, historically, more absentee voters are Democrats.

However, state law also says that those ballots may not be counted until November 17, meaning that the outcome of the entire election might be delayed. “That would be called my nightmare scenario,” said Amy Searcy, director of the Hamilton County Board of Elections.

To make matters worse, in the controversial 2004 election, the tabulation of provisional ballots was a bitter point of contention — again, because it hurt Democrats. According to "Preserving Democracy: What Went Wrong in Ohio," a report by the House Judiciary Committee investigating the controversy in Ohio in 2004, then Secretary of State Ken Blackwell’s “failure to articulate clear and consistent standards for the counting of provisional ballots likely resulted in the loss of several thousand votes in Cuyahoga County alone, and untold more statewide.” With approximately one-third of the ballots ruled invalid, the congressional committee concluded, the procedures constituted “a possible violation of the Voting Rights Act” because “they undoubtedly had a disproportionate impact on minority voters.”