Mitt "doesn't get" the auto bailout

Romney calls himself "a son of Detroit." The mayor of nearby Lansing, Virg Bernero, calls him "a son of something" 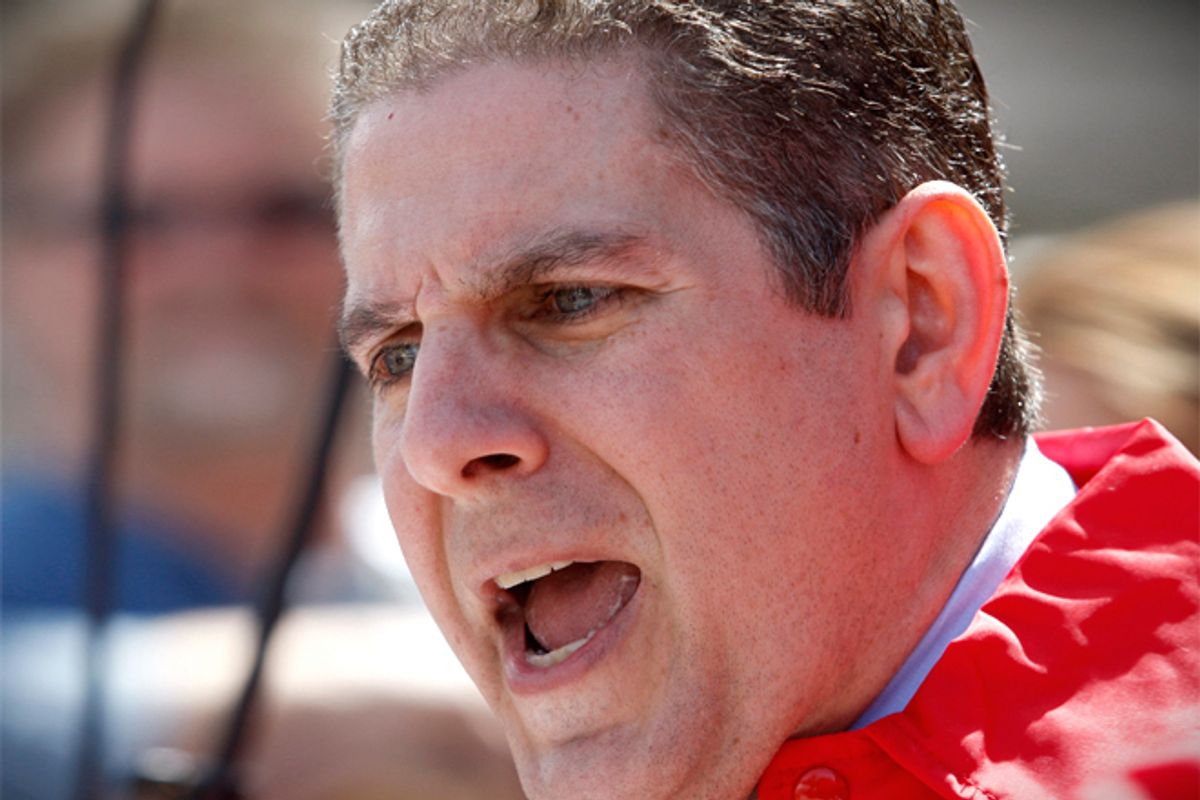 In 2009, Virg Bernero earned the nickname “America’s Angriest Mayor” after a series of quarrelsome debates about the auto bailout with free-market absolutists on Fox News.

“I gotta say, in all honesty, I was a little offended by your question, ‘Have the unions given up enough? Has the working man given up enough?’” Bernero shouted, before Jarrett even asked him a question. “My question is, ‘Has Wall Street given up enough, for the billions they have taken?’ I gotta tell ya, I am sick and tired of the double standard: one standard for Washington and Wall Street, another standard for the working people in this country. It always comes down to, in order to be more competitive, we gotta take it out of the hide of the working person.”

Bernero’s tightly wound populism came not so much from anger as from fear -- fear that Lansing, which had already lost its signature brand, the Oldsmobile, was about to lose its entire manufacturing base, and the 6,000 union jobs that went with it. Shutting down Lansing’s auto plants might have made Bernero’s city a sister in misery to Flint, 50 miles up Interstate 69, which went from having one of the highest per-capita incomes in the United States to the highest murder rate after GM eliminated 90 percent of its automaking jobs. To prevent that from happening, Bernero founded the Mayors Automotive Coalition, bringing together mayors from the Rust Belt, Louisiana, Georgia and Texas, to lobby Congress for a federal bailout of GM and Chrysler. (One of its members, former Youngstown, Ohio, Mayor Jay Williams, is now deputy director of the White House Office of Intergovernmental Affairs.)

While Bernero and his fellow mayors were pleading with senators for money, Mitt Romney wrote a New York Times Op-Ed titled “Let Detroit Go Bankrupt.” Romney predicted that “if General Motors, Ford and Chrysler get the bailout that their chief executives asked for yesterday, you can kiss the American automotive industry goodbye.”

GM, Ford and Chrysler got the bailout, and the American automotive industry is still here. Lansing’s Grand River Assembly, down to a single shift during the recession, recently hired 600 new workers to build the Cadillac ATS, a compact sedan Esquire says “may be the most important domestic car since the Model T.”

During Monday’s foreign policy debate, President Obama told Romney, “If we had taken your advice, Governor Romney, about our auto industry, we’d be buying cars from China instead of selling cars to China.”

“I’m a son of Detroit,” replied Romney, whose father, George Romney, was president of American Motors from 1954 to 1962. “I was born in Detroit. My dad was head of a car company. I like American cars. And I would do nothing to hurt the U.S. auto industry. My plan to get the industry on its feet when it was in real trouble was not to start writing checks. It was President Bush that wrote the first checks. I disagree with that. I said they need — these companies need to go through a managed bankruptcy. And in that process, they can get government help and government guarantees, but they need to go through bankruptcy to get rid of excess cost and the debt burden that they’d — they’d built up.”

Salon asked Mayor Bernero what would have happened to the American auto industry -- and to Lansing -- if Mitt Romney had been president in 2008 or 2009.

What was your reaction when you read Mitt Romney’s Op-Ed in 2008?

It was stunning. It was basically pouring water on a drowning man. It was not helpful. It was an absolute punch in the jaw, a slap in the face. I was stunned, in particular, because somebody who claims to understand the auto industry, whose father -- frankly, the apple has fallen far from the tree, because I think George Romney would have gotten it, like George Bush got it. I think George Romney was through and through a manufacturing guy and a car guy, while Mitt is more of a finance guy, more of a Wall Street guy, and that’s fundamentally a huge problem with our economy, that Wall Street has put itself at the middle of the economy, a paper economy. They don’t get manufacturing. They have no appreciation for manufacturing, and their view is, "Send it overseas." They think it’s inevitable that it goes overseas, and they’ve hastened the decline of this country.

If there had been no government intervention, and the auto companies had been allowed to go bankrupt without any help from the government, what would the consequences have been for Lansing in particular and for the auto industry in general?

I shudder to think what it would be. Believe me, it was as much fear as anything motivating me to organize the Mayor’s Automotive Coalition. When the whole thing was going down, we weren’t sure at all that Bush was going to do the right thing. It would have been absolutely devastating to Lansing and Michigan, and I think to the Midwest. I think it could have very well plunged the country into a depression, because of the magic of manufacturing, because of the ripple effect, the supply chain. It would have been devastating. I think it would potentially have affected Ford Motor Co. as well. Thank God that not one, but two presidents had the wisdom to see the consequences coming and thank God neither of them was Mitt Romney, because he fundamentally didn’t get it.

Romney said during the debate that the company could have gone through a managed bankruptcy without a government bailout. Why was government intervention necessary?

That, again, demonstrates how little he knows, how out of touch he is. Take yourself back to that time and remember that the finance industry had seized up. There was no money, there was no credit available, so how would the restructuring have taken place? Without the massive investment by the federal government -- the federal government in essence stepped in and acted as the bank, and that was vital, and that was really because Wall Street had seized everything up, because of the disaster that they brought on with all of their shenanigans and the crap that they pulled. It would have been liquidation. Nobody was willing to invest. It had to be the U.S. government. It had to be the U.S. taxpayer, through the U.S. government investing, just like when the U.S. government invested in Chrysler, and saved Chrysler, and that was a great investment that was paid back, and this one will be paid back, but it had to take that managed, structured government intervention that nobody else was willing to do. His buddies in finance couldn’t or wouldn’t do it. That’s part of the mirage and the myth he spreads, because oh, he believes in the invisible hand or whatever, capitalism, would have taken care of it. The invisible hand would have come in and chopped up those companies, liquidated them. Would my three plants here in Lansing be operational? Hard to say. I can’t imagine it. I think they would have been chopped up. I think we would have been obliterated.

One of the points that Romney did make in his Op-Ed was that the wage and the benefit structure of the American auto industry had to come down to where Honda and Nissan and Toyota were at. How much of the resistance to a bailout do you think had to do with punishing the unions?

I’ve heard that again and again from Republicans, so I think that was a key part of his agenda. I noticed when opposition comes up, when I really drill down, when I hear people bashing the rescue, a lot of times when these are right-wingers, they talk about, “Oh, it’s nothing more than protecting the union.” There’s a lot of resentment. I’m biased, because my dad’s a GM retiree. He has a modest pension. He worked there for 23 years. I find it ironic. People talk about unions like they’re such a big part of the problem. Right now, unions are at a low ebb. When they were at their highest point, in terms of number of unionization, this country, in terms of GDP and equality of distribution, strength of the middle class, was at its zenith. How can we say that the unions, when they’re at the lowest point in their history, “They’ve gone too far, they’re too powerful, they’re the problem”?

What would Lansing be like without General Motors, without auto plants?

It would be poorer. Even though we’ve gone from 30,000 people to 5,000 or 6,000 now. Those are still high-paying good jobs, which again, you’ve got the suppliers. So the actual number of jobs impacted by GM -- I don’t have the actual number. It’s got to be tens of thousands.

How does it change the nature of a community when you lose your manufacturing base?

When I see other communities, it just appears devastating to families. It’s like an economic tsunami. When I read the New York Times, and I read about these towns where the biggest factories have left, when you lose thousands of jobs, and the spillover effect, the devastation. Those families, those are kids that go to school, that need tennis shoes and clothes, I mean, grocery stores, restaurants, you name it. We’ve seen some of that from the plants that GM has closed, and we’re fortunate enough to have new ones that have arisen. And part of it is the hope. Right now, we’ve too many people unemployed, probably in the 9 percent range, but there’s hope. This is what’s hard to gauge. GM being there, being up and running, the smokestacks working, and the line running, and the new cars coming out, there’s something about that. There is a hope that it gives. We run a mobile food pantry once a month, and we go to different churches. I always show up there and I try to give ’em a little pep talk. And whenever I mention GM going strong, and whenever I mention the Cadillac ATS, the new luxury car that’s going to compete worldwide, those folks practically give me a standing ovation. They are excited. Even though they don’t work at GM, most all of them know somebody who does, and some of them, of course, are hoping one day to work at GM.

There certainly wasn’t time to go over Romney’s Op-Ed point by point during the debate.

I thought the president did a great job, but I wish the he’d had a chance to talk about it [more], because Romney was saying, "Oh, I was for it. That’s exactly what I was calling for." Uh, no. You were against the government investment. The government investment, it just so happens, was the freaking linchpin, because without it, nobody was willing to invest.

Did you hear the “son of Detroit” line?

He’s a son of something.