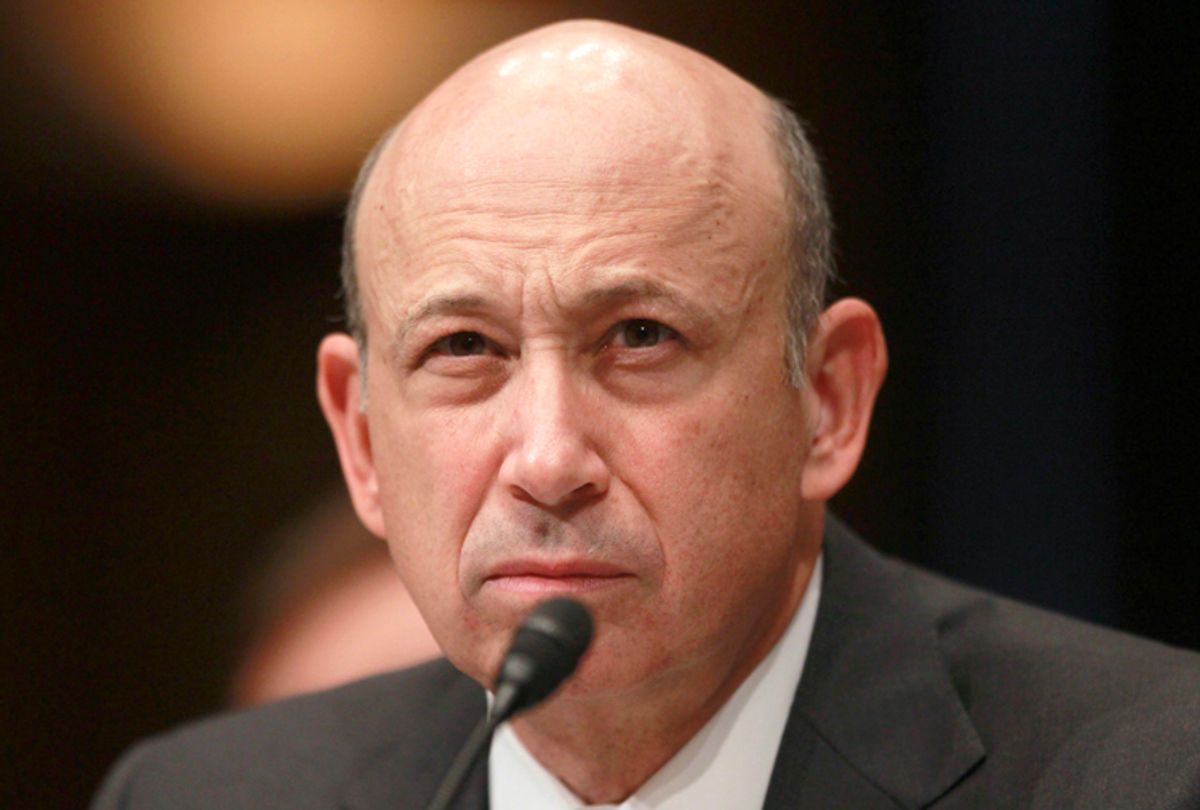 “Fix the Debt ” is a coalition of more than 80 CEOs who claim they know best how to deal with our nation’s fiscal challenges. The group boasts a $60 million budget just for the initial phase of a massive media and lobbying campaign.

The irony is that CEOs in the coalition’s leadership have been major contributors to the national debt they now claim to know how to fix. These are guys who’ve mastered every tax-dodging trick in the book. And now that they’ve boosted their corporate profits by draining the public treasury, how do they propose we put our fiscal house back in order? By squeezing programs for the poor and elderly, including Social Security, Medicare, and Medicaid.

Fix the Debt claims their agenda is not just about spending cuts. But when it comes to their tax proposals, they use the slippery term “pro-growth reform” to push for cuts in deductions that are likely to include credits for working families and — you guessed it — more corporate tax breaks. Chief among these is a proposal to switch to a territorial system under which corporate foreign earnings would be permanently exempted (instead of being taxed when they are returned to America).

This idea, also supported by the Bowles-Simpson deficit commission, would make it even more profitable for big corporations to use accounting tricks to disguise U.S. profits as income earned in tax havens. Citizens for Tax Justice estimates that such tax haven abuse will cost the Treasury more than $1 trillion over the next decade.

So who are the CEOs who are telling the rest of us to be responsible and tighten our belts after they’ve spent decades stiffing the U.S. Treasury? Of the 80 members of Fix the Debt’s CEO Fiscal Leadership Council, here are 10 that stand out as the biggest hypocrites:

Perhaps no tax-dodging U.S. corporation has done more to drain the U.S. Treasury than General Electric. Over the last 10 years GE reported more than $80 billion in U.S. pre-tax profits and yet paid a federal corporate income tax rate of just 2.3% .

One of GE’s favorite tricks is the “Active Financing Exception.” U.S. corporations are supposed to pay U.S. taxes on interest income earned anywhere in the world. But GE enjoys this special exception for companies that have “captive” foreign finance subsidiaries, such as their credit card arm. The measure was repealed as part of fair taxation reforms in 1986, but GE led a successful lobbying effort to bring it back in 1997. Although the exception was supposed to be temporary, Congress has renewed it six times. And, despite all the public hand-wringing over the deficit, lawmakers are seriously considering extending this and other corporate loopholes before the end of the year.

Last year, Boeing was one of 25 major U.S. firms that paid their CEO more than they paid Uncle Sam in corporate income taxes, according to an Institute for Policy Studies report . The aerospace giant enjoyed a $605 million tax refund in 2011, despite reporting more than $5 billion in U.S. pre-tax profits. CEO Jim McNerney made $18.4 million in personal compensation. In fact, Boeing is a serial tax dodger , having paid federal corporate income taxes in only two of the last 10 years.

One of the ways Boeing avoids paying taxes is by taking advantage of the Research and Experimentation Tax Credit, which saved the $137 million last year alone. Government investment in basic research is not a bad idea, but current R&D credits are structured in a way that primarily benefits large, well-resourced high-tech firms like Boeing that would probably do the research anyway. CEO McNerney also chairs the Business Roundtable, which aggressively lobbies for more corporate tax breaks.

Few corporations have been as dependent on U.S. taxpayers for their very existence as Goldman Sachs. The 2008 bailout of American International Group and the steady stream of low- and non-interest loans for the financial sector have kept the company alive.

CEO Blankfein says he’d accept a small increase in individual taxes for the wealthy in exchange for a comprehensive budget deal. But his corporate tax proposals would wipe out the revenue gains from rolling back the Bush tax cuts for top earners. Blankfein is a big supporter of the territorial tax system explained above. This is hardly a surprise, since Goldman Sachs already operates 37 subsidiaries in tax havens .

Blankfein has also used his position at the helm of the Financial Services Forum, a club for the CEOs of 20 top banks, to oppose financial transaction taxes -- small levies on trades of stock, derivatives, and other financial instruments. Goldman Sachs has made as much as $300 million per year from the volatile high-frequency trading strategies that would be hardest hit by such a transaction tax. In early October, 11 European governments announced a plan to implement such taxes, with expected revenues in the neighborhood of $ 75 billion per year . But Goldman Sachs and other Wall Street firms have blocked U.S. progress on this major revenue-raiser.

After a decade of risky and reckless mortgage lending, Bank of America survived the 2008 financial crash with the help of a $45 billion bailout. Today, Bank of America sits on $128 billion in cash — $18 billion of it is overseas —and much of that is sitting in the company’s 115 tax haven subsidiaries .

Last year, after investors saw their stock price decline 58 percent and 30,000 Bank of America employees lost their jobs to layoffs, CEO Brian Moynihan saw his compensation quadruple to more than $8 million. His predecessor, Ken Lewis, raked in more than $50 million in the two years before the housing bubble that Bank of America had help inflate burst in 2008.

Honeywell CEO David Cote has been a fixture at Congressional hearings calling for a territorial tax system for corporations. He is also Vice-Chair of the Business Roundtable, a club for big business CEOs that has called for an extension of all the Bush tax cuts, including those for millionaires and billionaires, as well as the tax cuts on unearned income from capital gains and dividends. These combined measures would add $1.5 trillion to the debt over the next ten years.

AT&T is another firm that paid its CEO more last year than they paid in federal corporate income taxes. CEO Randall Stephenson made $18.7 million , while the firm enjoyed a $420 million refund from Uncle Sam.

AT&T is a major beneficiary of “accelerated depreciation” rules that allow companies to turbo-charge tax deductions in the early years of the life of an asset. A 2009 accelerated depreciation rule saved the company $5.2 billion on their 2011 taxes, according to the firm’s 10-K report. Although touted as a way to jumpstart spending in a downturn, such tax breaks often result in taxpayers bearing a substantial portion of the cost of investments firms would’ve made anyway.

In 2009, the U.S. Department of Justice prosecuted Marriott International for using an illegal tax shelter swindle dubbed “ Son of Boss .” The scam involved setting up a series of complex paper transactions between company subsidiaries to create $70 million in fake losses that could be offset against Marriott’s real profits. Presidential candidate Mitt Romney, a long-time friend of the Marriott family and named after Marriott’s patriarch J. Willard Marriott, was the head of the hotel giant’s audit committee in 1994 at the time the board first approved the Son of Boss transaction. According to Bloomberg, Marriott has also shifted profits to a Luxembourg shell company and avoided hundreds of millions of dollars in taxes through one federal tax credit for so-called synthetic fuel that Senator John McCain dubbed an “expensive hoax.”

Less than two years after accepting $90 million in taxpayer-financed subsidies to locate a new world headquarters in the suburbs of Cleveland, Eaton Corporation announced that it would be moving its headquarters and reincorporating as an Irish company. The move is part of a merger deal with Cooper Industries, another Fix the Debt coalition member. The two companies boast that Eaton’s departure after 100 years in Cleveland will cut their tax bill by $160 million . Meanwhile, Eaton is fighting a $75 million bill from the IRS for back taxes and penalties related to alleged violations of transfer pricing agreements.

Verizon is one of 30 companies identified by Citizens for Tax Justice as having paid “less than nothing” in federal income taxes over the entire 2008-10 period. Despite earning $32.5 billion in profits during these three years, the firm got so much in tax subsidies that they wound up with a net tax refund of $951 million. That works out to a tax rate of negative 2.9%. In effect, every Verizon phone customer paid more in federal telephone excise taxes than Verizon paid in federal income taxes.

A recent Senate investigation exposed how Microsoft has used Olympic class accounting acrobatics to avoid paying taxes. Specifically, the Senate Permanent Subcommittee on Investigations charged that the software giant had devised a complicated transfer pricing agreement with a subsidiary in Puerto Rico to lower its tax bill on goods sold in the U.S. market by as much as $4.5 billion from 2009 to 2011. The investigation also accused Microsoft of avoiding billions in U.S. corporate income taxes by shifting royalty revenue to low-tax jurisdictions. Subcommittee Chair Carl Levin described Microsoft’s strategies as “tax alchemy, featuring structures and transactions that require a suspension of disbelief to be accepted.” Such alchemy, while not illegal, is a major contributor to the national debt.

Sanders to CEOs: Look in the Mirror

When Fix the Debt launched their 80 CEO-strong coalition on October 25, Senator Bernie Sanders responded by stating, “Before telling us why we should cut Social Security, Medicare and other vitally important programs, these CEOs might want to take a hard look at their responsibility for causing the deficit and this terrible recession.”

Instead, the Fix the Debt coalition members are portraying themselves as the honorable ones who are brave enough to push the tough austerity medicine that is the only remedy for our fiscal ills. Nonsense. We are the richest nation in the history of the world. Our problem is that too much of our wealth is going into the coffers of rich individuals and corporations and to pay for misguided wars.

There are numerous budget plans by Senator Sanders, the Congressional Progressive Caucus, and others that would get us on the right track. At the Institute for Policy Studies , we’ve identified a dozen policies that would collectively raise trillions of dollars to in ways that would not only address the fiscal challenge but help make our economy more equitable, green, and secure. The report also points out that until we recover from the current unemployment crisis, we should not be contemplating any spending cuts that could deepen the crisis.

The Fix the Debt coalition is using the so-called “fiscal cliff” as an opportunity to push the same old corporate agenda of more tax breaks while shifting the burden on to the middle class and the poor. If America’s CEOs really want to Fix the Debt, they should first commit to eliminating the loopholes that have allowed them to avoid paying their fair share of the cost of government, including investments necessary to keep our families and our communities strong and secure.