The Republican Party is Richard Mourdock

It doesn't matter how many extreme candidates crash and burn. Republicans never seem to learn their lesson 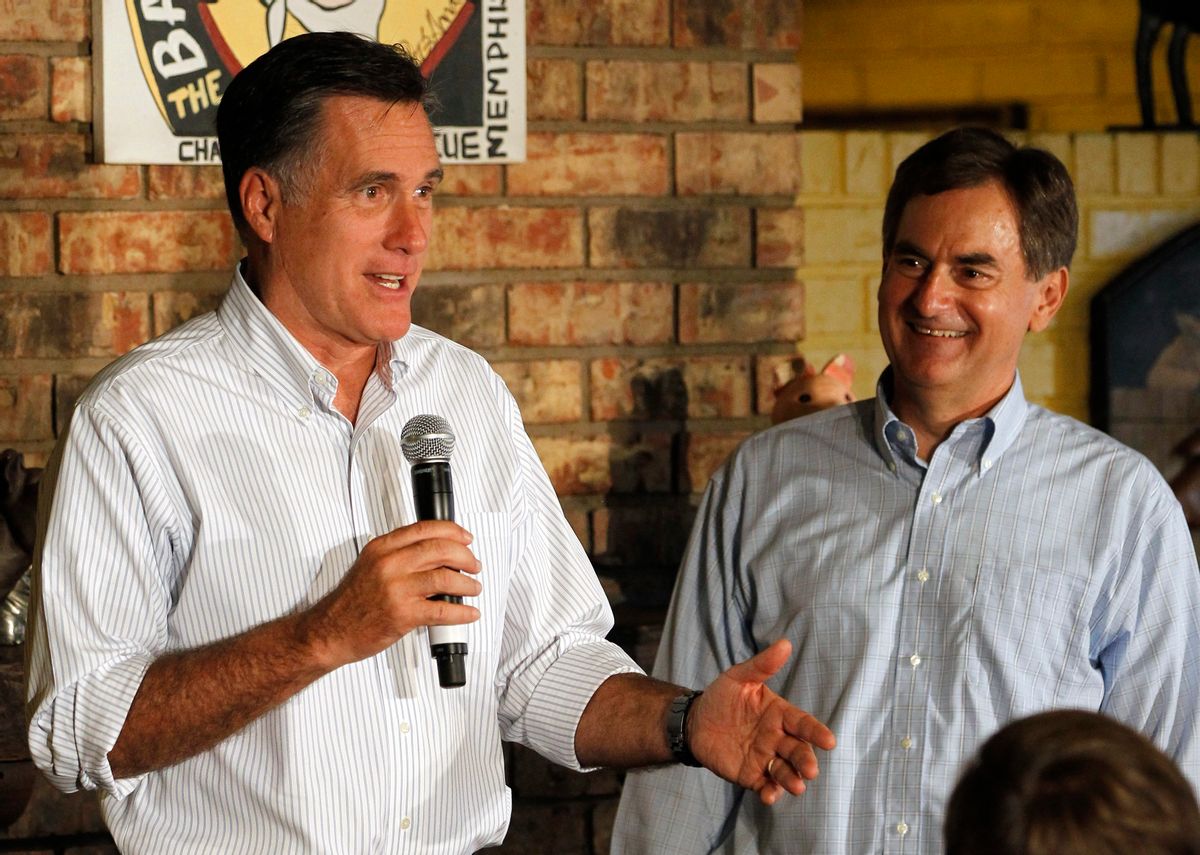 If the polls hold up, the biggest surprise of this election cycle will certainly be Democrats holding the Senate – and very possibly even adding to their majority.

I know what you’re thinking: Todd Akin, Richard Mourdock (pictured with Mitt Romney above) and their unfortunate habit of making comments about rape that drive voters away. No doubt, that’s a part of what’s happened to the Republicans in this cycle.

But as much as Republicans have a real nominations problem, one which probably will cost them more than just those two seats in this cycle, I see no sign at all that the party is going to learn any useful lessons from it. The problem is that the scope of the likely defeat is so broad that everyone is going to be able to find convenient targets for blame.

Remember, this was going to be an election cycle that set up very nicely for Republicans. Because we’re six years out from the 2006 Democratic landslide, the Democrats had to defend 23 seats while only 10 Republicans were up for re-election. Impending Democratic retirements in Nebraska and North Dakota made it seem that getting the three seats needed to reach 50 would be automatic, with the only question being whether Republicans could get close enough that 60 seats after 2014 would be well within reach.

Yet today, it appears that Republicans are very likely to fall short of a majority even if Mitt Romney wins and Paul Ryan becomes the tie-breaking vote. In fact, the chances are very good they might even (net) lose a seat or two.

I’ve argued before that it’s a mistake to only look at folks such as Akin, Mourdock and their comps from the last cycle – for example, famous non-witch Christine O’Donnell. An equally large problem for Republicans is that every time one of those poor candidates wins a primary, it discourages good candidates from running in the future.

The problem, however, is that in this cycle Republicans of all stripes are having more trouble than one would expect in Senate contests. Surely the two most famous are Akin and Mourdock. In both cases, Republicans would almost certainly have won if they had nominated better candidates; both now will probably lose, and yet Tea Partiers will be able to point to Nebraska, where longshot primary winner Deb Fischer appears ready to solidly trounce former Senator Bob Kerrey. They’ll also be able to talk about self-proclaimed outsider Ted Cruz in Texas, who is easily winning in that safe state.

Meanwhile, there are plenty of mainstream conservatives who are having plenty of trouble. Heather Wilson in New Mexico and Linda Lingle in Hawaii are exactly the kind of candidate the National Republican Senate Committee would love to see run in every state, but neither ever really fired at all, and the polls show both being buried in open-seat races. Scott Brown was the darling of the Tea Partiers when first elected, but he’s been as moderate as any Republican in the Senate, and it doesn’t seem as though that’s going to be able to save him. Former Governor Tommy Thompson is yet another candidate easily mocked as an “establishment” pick who is doing poorly. And while both Denny Rehberg in Montana and Rick Berg in North Dakota – neither a Tea Partier – may still win, neither has locked up his race early, as Republicans might have liked.

Of course, not all “establishment” candidates are very strong. Tommy Thompson was probably a bad idea, regardless of his ideological positions. But then again, note that any of the mainstream conservatives who faced a Tea Party candidate in a primary, Thompson included, wound up embracing fringe issues that could be used against them in the general election.

But try telling that to anyone who supports those issues.

In other words, conservatives will have little trouble finding counterexamples to anyone who suggests that nominating fringe conservative candidates with little qualification or apparent political skill might actually be a bad idea. And they’ll also find it easy to ignore any recruitment problems that might be caused by wacky fringe candidates winning primaries.

That’s only going to be worse, of course, if Mitt Romney loses – there’s little question but that his loss will be blamed, at least within the conservative information feedback look, on his moderation and not on the conservative issues he embraced or the damage the Republican Party has sustained to its image from the Akins, Mourdocks, O’Donnells, and more.

Which means the most likely scenario for 2014 will be more of the same.