Sunday best: GOP pretends no one cares about abortion 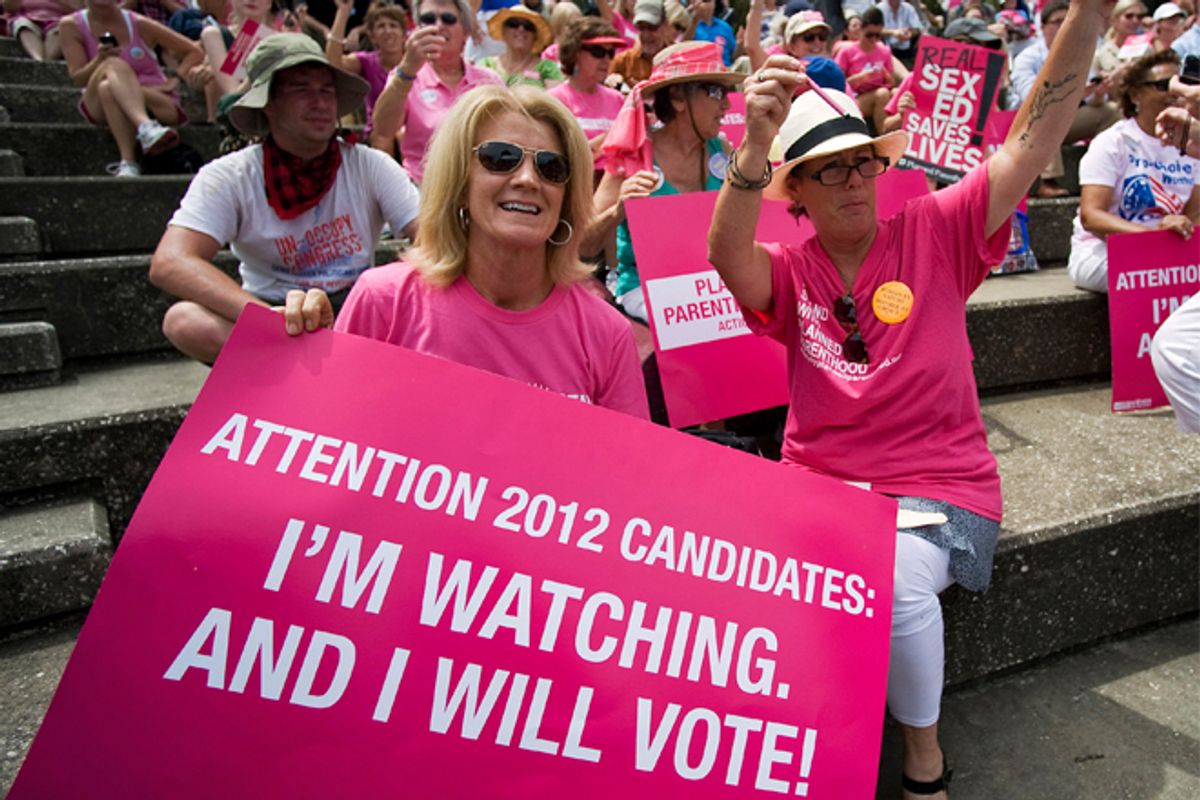 With a major storm and presidential election arriving within a week of each other, the penultimate batch of Sunday morning political talk shows before the election were dominated by talk of how Hurricane Sandy might impact the election. But abortion and Libya also made appearances. Wisconsin Republican Sen. Ron Johnson wins our award for hackiest political analysis of the week (and there’s a lot of competition) for saying people care more about the GOP’s pet Libyan conspiracy theory than about abortion.

As for the storm, everyone, of course, said their focus is on the well-being of people in the storm’s path, but pundits couldn’t help but try to find the political angle as well. There seem to be two main theories: One is that the race will essentially be frozen in place as the media and everyone else shifts focus away from the election for the next few days. Since Obama remains slightly ahead in key swing states, this scenario is seen as helping him by preventing Romney from gaining traction. Obama could also earn points by “looking presidential” while leading a successful federal response to the disaster, pundits said.

On the other hand, Obama is crushing Romney in early voting, which is already going on in key states, especially Ohio, and any obstacle to getting people to the polls this week could be bad for the president. Likewise, if the storm lowers turnout in general on Election Day, that’s also seen as hurting Obama, since he needs strong support from demographics that tend to vote in lower numbers, like young people and Latinos.

But here’s how the storm will actually affect the election: No one knows. Anything else is pure speculation, but apparently both the Obama and Romney campaigns are concerned. For what it’s worth, Bob McDonnell, the Republican governor of battleground Virginia, which is expected to get hammered, said on CNN that they’re prioritizing election infrastructure in their response to the storm, so everything should be normal by Election Day.

Leave it to Newt Gingrich to politicize the storm to an almost comical degree. "You'll notice he's canceling his trips over the hurricane. He did not cancel his trips over Benghazi. And so you have to wonder, between Benghazi, the price of gasoline, and unemployment, just how much burden the president's going to carry into this last week,” Gingrich told George Stephanopoulos on ABC. From there, it was quick jump to: “I think [Romney's] actually going to end up winning around 53-47."

Benghazi, of course, refers to the attack on American diplomats in the Libyan city, over which Republicans have been hammering Obama. It almost sounds like Gingrich doesn’t think Obama should cancel trips to deal with the hurricane, but it’s also unclear why Obama would have canceled a trip to deal with Benghazi, as the whole incident lasted a matter of hours, not days like the hurricane will. As for Newt’s political forecast, it seems only slightly more plausible than a moon base. Real Clear Politics’ polling average has Romney less than a percent ahead of Obama nationally. Nate Silver projects Obama squeaking out a 2 point popular vote victory over Romney on Nov. 6. It’s entirely possible that Romney wins the popular vote, but not by 6 points, sorry Newt.

But Benghazi did come up a lot today, suggesting the GOP has decided to concentrate its fire on the topic. Arizona Republican Sen. John McCain, on CBS’ "Face the Nation" today, suggested it was even worse than Watergate. “This tragedy turned into a debacle and massive coverup or massive incompetence in Libya is having an effect on the voters because of their view of the commander in chief,” he said. “Somebody said to me the other day, ‘This is as bad as Watergate.’ Nobody died in Watergate,” McCain added.

While there’s no doubt officials made some tragic errors around the attack, the Republican narrative against Obama just isn’t based in reality, as Candy Crowley’s real-time fact check of Romney in the second debate demonstrated. Their smoking gun is an erroneous bit of early intelligence that ended up being wrong and it’s not even clear what they’re accusing Obama of doing anyway. Mostly, their obsession with the topic comes off as little more than party-endorsed conspiracy theorizing that seems to be dog whistling that the president actually wanted the Americans killed, or at least didn’t mind much that they died.

It’s interesting that Romney surrogates and allies are going all in on Libya considering that the man himself has been largely avoiding it. Libya disappeared from Romney’s stump speeches in recent days. And in last week’s foreign policy debate, he completely passed on every opportunity to slam Obama on the attack. In that debate, moderator Bob Schieffer’s first question was on “the controversy over what happened” in Libya. But Romney’s response almost completely ignored Libya, spending more time on Syria and Mali instead.

Which brings us to our Sunday Best, which has to do with the intersection of Benghazi and abortion, which apparently exists somewhere. A frequent topic of discussion today was Indiana Republican Senate candidate Richard Mourdock’s comments on how a pregnancy from rape is actually a “gift from God.” But according to the (almost all male) representatives of the Republican Party on TV today, no one cares. “I think the reality is, Candy, overwhelmingly, I promise you, people out there are not talking about what Richard Mourdock said,” RNC Chairman Reince Priebus assured CNN’s Crowley.

Gingrich again gets the prize for going too far. Asked by Stephanopoulos to respond to Obama deputy campaign manager Stephanie Cutter’s comments on Mourdock, Gingrich told Cutter to get over it. “OK, so why can't people like Stephanie Cutter get over it?  We all condemn rape,” Gingrich helpfully explained. As we’ve noted, conservatives seem to have a thing for dismissing Cutter in personal ways.

But Wisconsin Sen. Ron Johnson won the day. Abortion is “not even an issue here in Wisconsin," Johnson said on Fox News Sunday after being asked about Mourdock’s comments. "It doesn't even move the radar at all ... What people are concerned about, like I said yesterday -- it was amazing how many people are coming up to me demanding answers on Benghazi,” Johnson said.

Considering that barely half the country even knows about Benghazi, according to a recent Pew poll, that seems hard to believe. The Pew survey found that 56 percent said they were following news about the attack, and that almost 30 percent had no opinion about the administration’s handling. Contrast that with polling on abortion, which regularly shows that upward of 97 percent of Americans have strong opinions on the issue.

Abortion is by far the “most important issue for women in this election,” according to women polled by Gallup. A plurality of 39 percent listed it as their top issue, while jobs came in a distant second at 19 percent, followed by healthcare at 18 percent. Not even 1 percent of women listed national security as their top concern. Among men, just 4 percent did.

By the way, after a week dominated by talk of abortion in the wake of Mourdock’s comment, who did the Romney campaign and the GOP send onto the major Sunday shows? About a dozen Republican men and just one woman. The one woman was Carly Fiorina, the former Hewlett Packard exec and former California GOP Senate candidate. On "Meet the Press," she denounced Mourdock’s comment, but said they don’t really matter. “Women care about the role of government. Women care about their children’s education,” she said.

That’s all true, according to the polls, but they care about abortion more and it will only hurt Republicans as long as they pretend that’s not true.