As Hurricane Sandy ravages the East Coast, another crisis looms: The storm might down our electronic voting booths 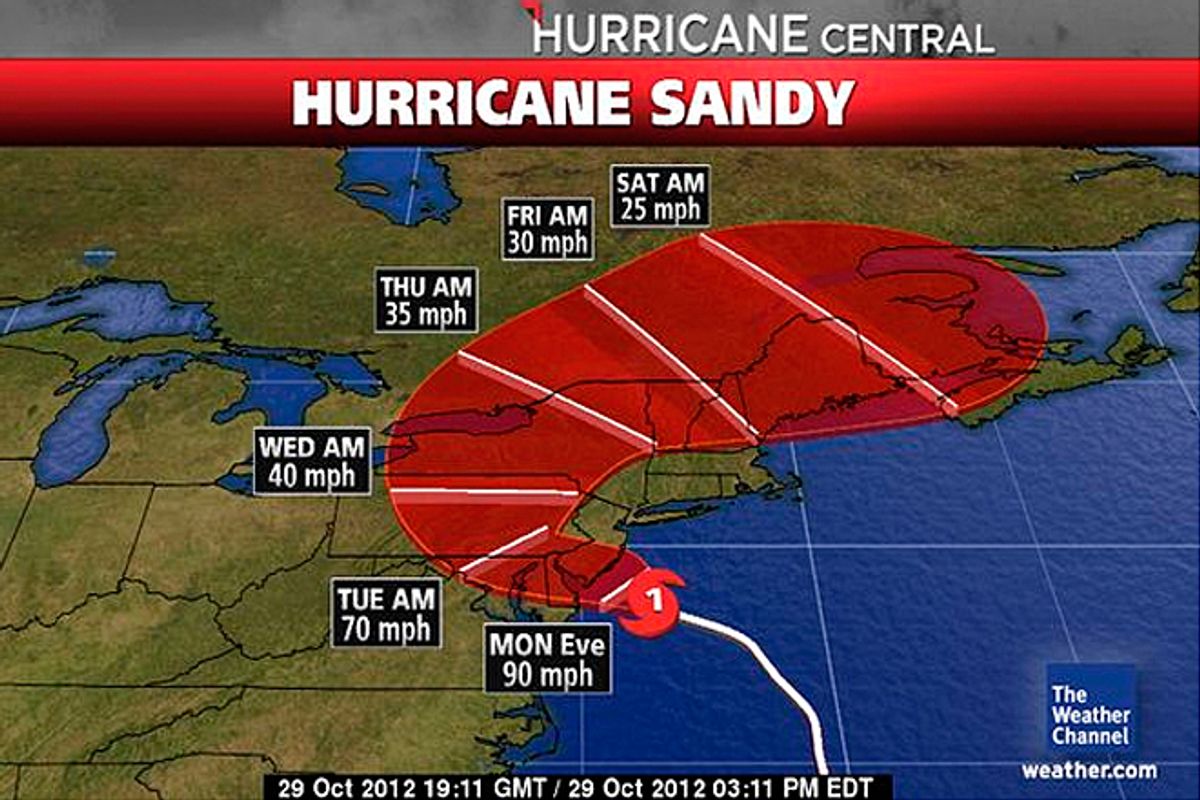 "History is being written as an extreme weather event continues to unfold, one which will occupy a place in the annals of weather history as one of the most extraordinary to have affected the United States," the Weather Channel's senior meteorologist Stu Ostro is warning. "This is an extraordinary situation, and I am not prone to hyperbole."

The National Weather Service has been telling us over the past several days that the serious impact of the super storm that is Hurricane Sandy is not to be underestimated. But there is another concern that has been keeping me awake over the past week or so.

NBC's Al Roker spelled out that concern briefly on Sunday's "Meet the Press," explaining what I've been worrying about since it became clear that the storm could have serious ramifications on Election Day.

I'm not talking about the political ramifications about its effect on planned campaign events between now and Election Day, on early voting turnout, or even how it's handled by President Obama and FEMA, etc. I'm talking about the serious question of whether voters will be able to vote on Election Day at all, particularly in states that force voters to use electronic voting systems at the precincts.

"We expect massive power outages throughout the area," Roker told NBC's David Gregory (before Gregory hurried to ignore the comment entirely). "As the system moves on shore it's going to be a long-term effect. It's going to last for about 72 hours. And so we're talking about people who could be without power for at least 10 days. That, as you know, will take it right into Election Day. So what will people do if they can't get to the voting booth, or the voting booths don't have power?"

Good question, Al. And one we've warned about here for a number of years.

There are about a half a dozen states (listed below) directly in harm's way where voters are forced to use 100 percent unverifiable electronic voting systems on Election Day. In those locations, unless they have enough emergency paper ballots printed up to accommodate the entire electorate at precincts where power remains disrupted on Election Day, there could be very serious and unprecedented problems.

While most electronic voting systems have some kind of battery backup system, presuming those batteries are charged and actually working (there are no guarantees of even that), they may still only allow for some three or four hours of use.

Moreover, many polling locations now use electronic poll books, rather than paper, to sign voters in to vote. In short, this could be more of a disaster in the making than folks realize right now as they, justifiably, worry about far more immediate concerns such as personal safety.

With power outages at the precinct, jurisdictions that use paper ballots and paper poll books will, at least, be able to allow voters to vote, even if those ballots can't be tallied at the precinct on local optical scanners on Election Day. At least those ballots can be tabulated later (presuming the chain of custody remains secure, etc.) either by hand or by centralized (if flawed and manipulatable) optical scanners. In short, at least people will be able to vote.

But where voters are forced to rely only on electronic touch-screen systems, if power is not restored by Nov. 6, we could be facing one of the problems that The BRAD BLOG has long warned about as just another reason why it's insane to rely on such systems for voting. Ever.

The states now in immediate harm's way where most voters are forced to vote on electronic touch-screen systems on Election Day across much of the state include:

A number of counties in Ohio, as well as most of Tennessee -- though neither state is quite as directly in the path of the worst of the storm -- also require voters to vote electronically on Election Day.

I hope they all have some serious backup plans in the works, though at this late date, I suspect, it may be difficult to print up as many paper ballots as would be needed in some of the worst-case scenarios.

I don't usually recommend Early Voting -- by far, the best way to increase the chances of your vote being counted and counted accurately is to cast it, on paper, on Election Day -- but in any of the locations listed above, in jurisdictions where voters are otherwise forced to vote on electronic systems on Nov. 6, voting early this year, or, better yet, by absentee paper ballot if you're able, might be a very smart idea.

This piece first appeared at the BRADBLOG.