Romney says he'd ax FEMA and send disaster response back to the states. The consequences would be catastrophic 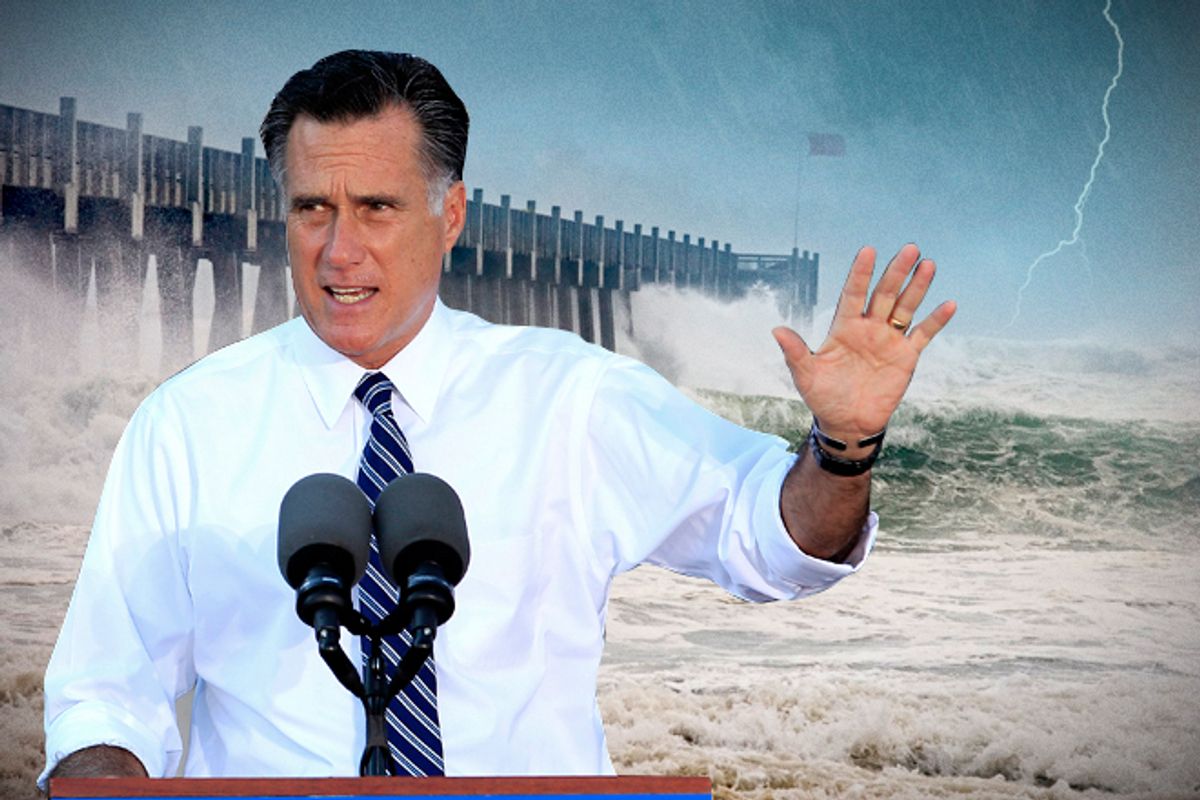 As 50 million East Coast residents brace for Hurricane Sandy’s impact, President Obama has already signed disaster declarations for at least a dozen states, making available the resources and unique coordinating capabilities of the federal government -- specifically, the Federal Emergency Management Agency, or FEMA --  to assist in the response and recovery.

It's worth noting that Mitt Romney has said he'd get rid of FEMA and leave states to fend for themselves.

At a CNN-sponsored GOP debate last June, moderator John King asked Romney what he would do to keep FEMA solvent. Romney replied that we need to cut government spending and should “send it back to the states ... And if you can go even further and send it back to the private sector, that's even better.” King looked a bit surprised and followed up to make sure Romney was saying what he appeared to be saying. “Including disaster relief, though?” King asked. Romney answered affirmatively: “We cannot -- we cannot afford to do those things without jeopardizing the future for our kids. It is simply immoral, in my view, for us to continue to rack up larger and larger debts and pass them on to our kids, knowing full well that we'll all be dead and gone before it's paid off. It makes no sense at all.”

A Romney spokesperson, in a vague statement to the Huffington Post last night, suggested that eliminating FEMA is still Romney’s position.

“Send it back to the states” is a typical conservative talking point, of course. But the states don't inspire much confidence when it comes to emergency management. FEMA also has a budget of about $6 billion that would disappear from the total pool of money available for disaster relief if the agency were eliminated tomorrow, unless states raised their taxes to make up for the loss, something Romney and his party seem unlikely to support.

Romney, as a former governor, ought to know better.

This is how a federal disaster area gets declared: The governor of a state submits a letter to the local FEMA branch requesting help. “In this request the Governor certifies that the combined local, county and state resources are insufficient and that the situation is beyond their recovery capabilities,” according to FEMA. So every time a governor submits a request for assistance -- and there were a record 99 disaster declarations in 2011 -- they have to declare they are incapable of handling the situation on their own.

And Romney does know, firsthand. For example, there was a November 2006 chemical plant explosion in Danvers, Mass. “You know, we'll be looking at what the requirements are from a, from a national standpoint. We do have FEMA here now ... The needs of the state or it should be the needs here, if they can be met by the state, they will be. If it's beyond the needs or the capability of the state, then we'll go to the federal government,” he said at a press conference.

But perhaps it isn’t fair to criticize Romney over these instances, since he was merely operating under the existing system and naturally wanted to do everything he could do to help his state.

But the idea of sending things back to the state makes little sense if you think about it for even a second. Natural disasters frequently transcend political borders, affecting multiple states simultaneously. Absent a unified chain of command coordinating the response in affected areas, you’d get a patchwork of different responses and approaches, which may be very difficult to coordinate. Poorer states with a weaker tax base may be less able to respond adequately. A national agency can pool and transfer resources across the entire county in a way that states can't -- individual state may go years without a major disaster, whereas FEMA is always busy. There are plenty of legitimate criticisms of FEMA, especially after Hurricane Katrina, but they all relate to how it needs to be more effective, not less so.

In a nutshell, disaster preparedness hits at the whole point of having a federal government and federalism. It’s a pretty good illustration of how far to the right the GOP has shifted that Romney wants to send disaster relief to states despite that being an obviously terrible idea. And privatizing disaster relief is even scarier. Who will pay for that? How will contractors be held accountable? Other cases of largely privatized disaster relief have raised serious red flags.