You won't hear much about climate change during coverage of Hurricane Sandy. You should 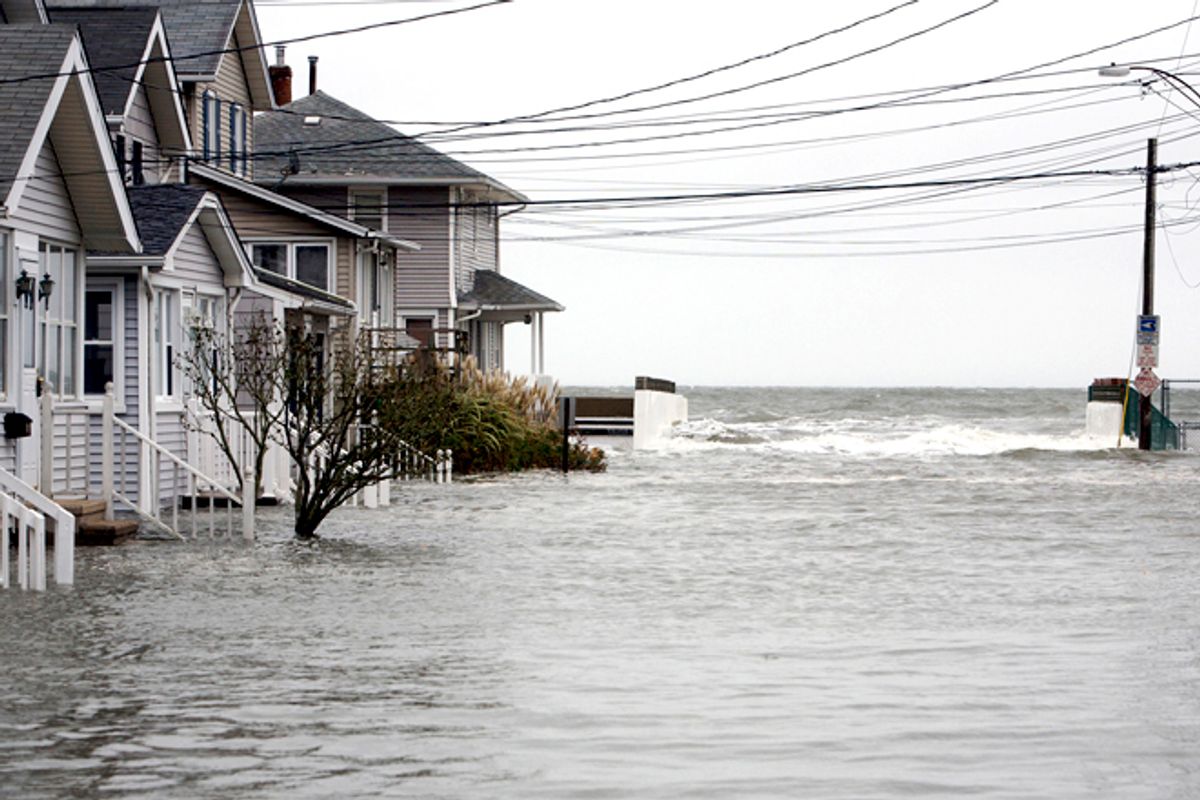 When historically unprecedented monster storms start hammering the East Coast of the United States, Kevin Trenberth's phone starts ringing off the hook. That's only natural when  your official title is "Distinguished Senior Scientist in the Climate Analysis Section at the National Center for Atmospheric Research," and when you have  served as lead author of the International Panel on Climate Change's (IPCC) "Scientific Assessment of Climate Change" reports in 1995, 2001 and 2007. Even as Trenberth monitored his own daughter's evacuation from her home in Hoboken, N.J., he took time out to answer a few questions from Salon about Hurricane Sandy and global warming.

So what can we say about climate change and Hurricane Sandy? What's the appropriate way to think about this?

In general, hurricanes depend tremendously on the environment in which they form. In particular, they depend on the sea surface temperature. Since the 1970s, sea surface temperatures are higher because of climate change by about 1 degree Fahrenheit. The air above the ocean is warmer and moister as a result. Research shows that the water holding capacity of the atmosphere goes up by about 4 percent for a 1 degree rise in temperature.

Now there are fluctuations, of course, on top of that, from natural variability and day-to-day weather and El Nino events and things like that, but that's the general background. So as a general result we expect storms will be more intense, and in particular the rainfall will be heavier as a consequence. The extra moisture in the atmosphere provides fuel for the storm. The estimate is that there is an increase of about 5 to 10 percent in precipitation associated with climate change and we have seen examples of that in the last year or so with Hurricane Irene last year and Hurricane Isaac this year, where the main story was all about the flooding.

Now, on top of that there are some local natural variability components. The sea temperatures along the coast from the Carolinas up to Canada are quite warm, as much as 5 degrees Fahrenheit above normal and maybe 1 degree of that is climate change, but there are some extra elements that are helping to feed this storm and keep it alive. Here we are in late October and the sea temperatures are much more like early September, so that helps to fuel the hurricane part of the storm. But also at this time of year the jet stream is moving south from its summer location over the U.S.-Canadian border and the westerlys are more generally setting in across the country, and as a result there is a strong extratropical component to the storm. What we might call a big trough of low pressure has blended in with this storm and there is even some snow expected on the backside of this storm. So it's really a hybrid storm now; it's a hybrid extratropical storm.

If climate change is only responsible for 1 degree of the 5 degrees of warming that we're seeing in sea temperatures off the East Coast, what accounts for the rest of the rise?

A key part of it actually relates to the absence of previous storm activity. Storms result in evaporative cooling and they mix up deeper cold water with surface-level warm water, so it is the absence of storms up until now that has set up these conditions. The extra high temperatures are therefore certainly regarded as being a somewhat transient situation that won't be sustained. But the 1 degree Fahrenheit component from climate change applies much more generally because the whole ocean down to quite large depths has warmed.

There seems to be a lot of controversy over whether we can expect a higher frequency of monster storms as a result of climate change.

Well, with these storms, the whole issue is that the storms churn up the water and therefore they bring up cold water from down below, and there is tremendous amount of evaporative cooling that pushes the moisture into the atmosphere and that's the moisture that ultimately ends up as the precipitation. So behind a storm there is a "cold wake" that forms. That's one of the reasons why tropical storms never follow on the same path as a previous storm. It's because there is actually a less favorable environment in that region for the next storm. So, because the big storm takes energy out of the ocean and cools it off, it creates an environment less favorable for the next storm. What we expect is we will get bigger storms, stronger storms, more intense storms, but maybe fewer storms overall. The count is not what matters: The intensity and size of the storm is really what matters.

The arrival of Hurricane Sandy is making your phone ring, but during the presidential campaign, climate change has hardly been mentioned. Were you disappointed that neither candidate mentioned this in the debates, that climate change wasn't a political issue at all?

Well, I think it's a political issue that it didn't get mentioned, really. My understanding is this is not something the Obama administration thinks they can overall win votes on, because there are areas of West Virginia and Ohio that are coal mining areas and so they've tried to stay away from it.

But this is not going away. Mother Nature keeps coming back at us and saying look: I'm getting warmer -- the earth is getting warmer. Here's another reminder. And that's what this latest event is perhaps all about.