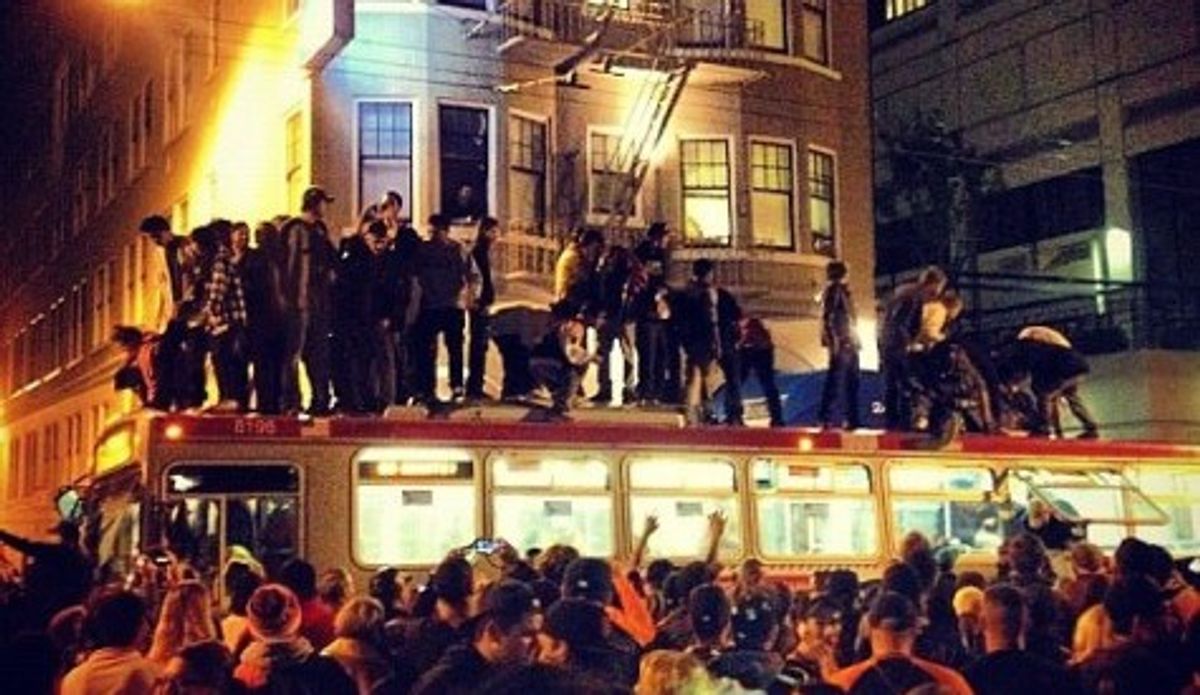 SAN FRANCISCO (AP) -- Thousands of baseball fans took to the streets of San Francisco to celebrate the Giants World Series victory, with revelers gathering on corners, in parks and at watering holes as car horns blared long into the night.

Fans across the city left their televisions and rushed outside, greeting diners, bar patrons and other merry makers Sunday night after the Giants defeated the Detroit Tigers 4-3 to sweep the Series for their second title in three years.

Small fires broke out in trash cans here and there, but the violence and vandalism appeared to have been kept to a minimum a few hours after the last pitch.

"We're watching out for any major flareups and fires," said police spokesman officer Carlos Manfredi. "We want to maintain public safety at all times, and don't want to put first responders in any danger."

He said police were responding to certain hot spots but had no reports of serious problems. No arrest figures were available.

KGO-TV reported that at least three bonfires flared on Mission Street with fans fueling them with couches, signs, newspaper racks, and other items. Firefighters had to be escorted in by riot police to fight some of the fires.

At Polk and Bush streets in the city's Polk Gulch neighborhood, hundreds of fans sprayed champagne, set of off firecrackers and blocked traffic for at least two hours after the game.

Several blocks away, police clad in riot gear looked on as revelers danced around Civic Center plaza where they watched the game on the Jumbotron.

The thousands of fans assembled there exploded in a roar with the final out.

Anthony Yos, 10, hugged his brother Luciano Yos, 15 and the two danced in an embrace with their parents.

"This is the greatest thing," Anthony said with a smile that could go no wider. "The Giants are my favorite team."

Someone in the crowd launched fireworks a few minutes after the game and the park was awash with fans, strangers hugging strangers and wine bottles and marijuana cigarettes being freely passed through the crowd despite a heavy police presence.

"This is San Francisco, "said Laura Chu. "We know how to party."

Sara Vivas brought her 6-year-old daughter Briana Cepeda from Oakland to view the game and join the celebration. They were both clad head-to-toe in Giants garb.

"This is something she will remember forever," Sara said.

Bars of all stripes, from the Castro to Chinatown were packed with supporters of the beloved Giants.

So-called pedicabs whisked fans down roads blocked to traffic and revelers enjoyed a New Year's Eve-like freedom to roam up and down streets usually clogged with traffic.

Mayor Edwin Lee announced the ticker-tape parade would be held Wednesday at 11 a.m., down Market Street to Civic Center Plaza

"The rain in Detroit couldn't dampen the drive, talent and determination of the San Francisco Giants team tonight. Once again, the Giants brought our City together as we all cheered on our hometown heroes to another remarkable World Series victory," he said.

The 2010 parade drew hundreds of thousands fans, who lined the streets of downtown San Francisco. The parade ends at City Hall.

The party started early in Civic Center park, with many showing up hours before the 5 p.m. game on a nice Indian Summer day in San Francisco.

The city's ubiquitous food trucks did a brisk business and drummers of all types beat their instruments throughout the game.

"Where else in the world do you want to be tonight," replied Dave Wormald of Toronto. Wormald and two other colleagues were in town for a business meeting and were watching the game at their hotel when they decided to embark for City Hall.

"This is the place to be," said Jim Vliet, Wormald's colleague.