"The Thick of It": Do Brits have a stronger stomach for the truth? 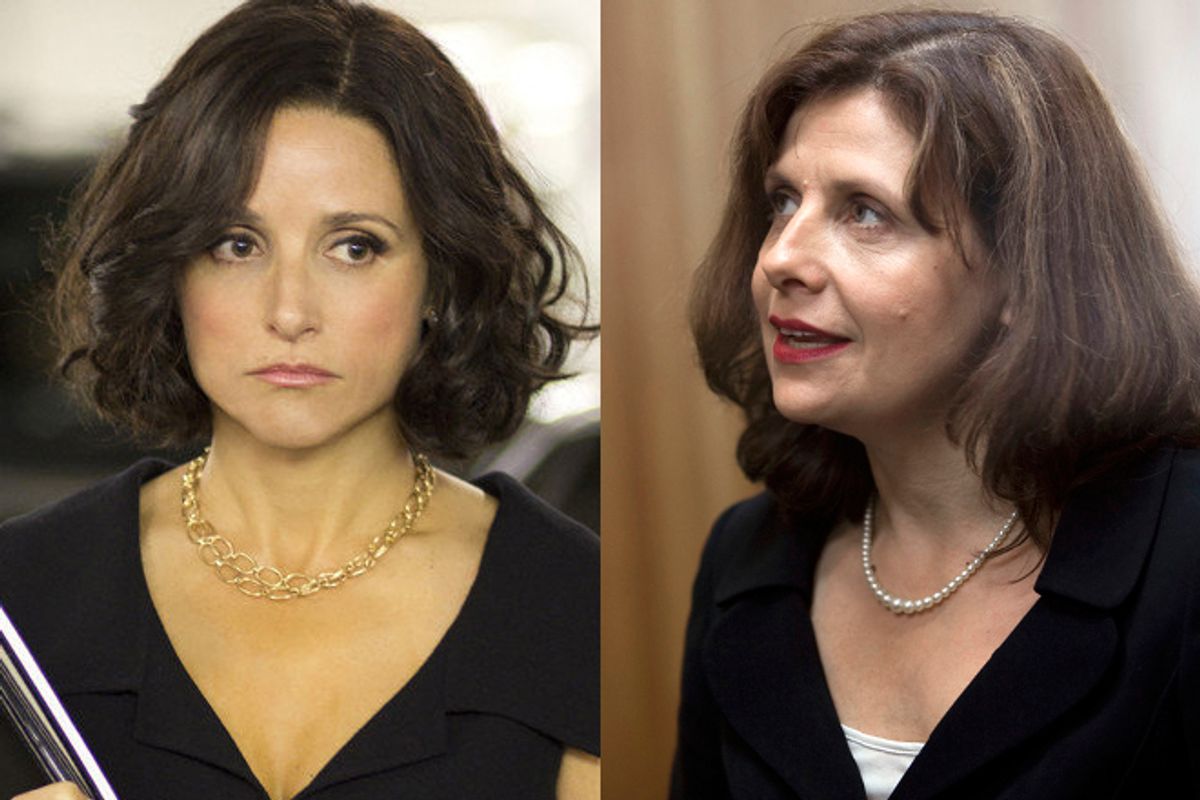 When screenwriter Peter Tolan wrote the series finale of HBO’s seminal comedy “The Larry Sanders Show,” he fixed a Post-it note on the top of his computer screen that read, “love.” With that word hovering above the final script, Tolan says, he knew he would send off his neurotic, selfish, yet endearing characters with the warmth they deserved. It was proof that even the cynical, cinéma vérité crowd likes a happy ending.

Armando Iannucci’s political satire “The Thick of It” owes many points of style to its forerunner “Larry Sanders,” but meaningful, sentimental closure is not one of them. The series finale on Sunday was in fact a brutal affair, with every wretched minister, back-biting adviser and thickheaded secretary suffering the full consequences of their idiocy, duplicity and cruelty — except for the really awful ones, who got off scot-free! Even the format was unsentimental. There was no extended, hour-long run time; the conclusion of seven years, four seasons and an Academy Award–nominated film was wrapped up in half an hour, business as usual. All the usual avenues for last-minute TV moralizing were blocked; anyone who attempted an on-screen monologue was heckled in real time by the other characters (“If you’re gonna go, go. Spare us the Peter Finch bullshit”).

What brought the usually farcical and sweary series to such a dark conclusion? By the end of the fourth and final season, there has been a public inquiry into the suicide of a National Health Service worker, whose home the Tories sold off and whose embarrassing medical records the Labour opposition leaked for political points. Everyone is scrambling to reposition during the post-inquiry fallout, and almost everyone ends up crushed by the collapsing scenery. Nicola Murray (Rebecca Front), the recently deposed leader of the Labour opposition, subjects herself to exhausting humiliation just to claw her way to a position of “party grandee,” at the expense of her family and her own self-respect. The closest person to a moral actor, Glen Cullen (James Smith), resigns from government to turn himself in, for even he has committed perjury in the inquiry. And the strikingly obtuse press secretary Terri (Joanna Scanlan) doesn’t even manage to get fired and claim her pension.

Most devastatingly, the show’s heart and soul, the ruthless and foulmouthed spin doctor Malcolm Tucker (played by the peerless Peter Capaldi), ends up deflated and defeated, gazing past the camera into the abyss. Leaving government to handle a legal battle over his perjury during the inquiry, he gasps to Ollie, “I just want my dignity.” But the poison Malcolm himself has injected into the body politic and the parasitic press ensures he doesn’t get a noble exit. The once all-powerful “enforcer,” the tyrant of No. 10 (“Pol Potty Mouth,” “Thin White Mugabe,” and “Spin-oza” are only a few of his monikers) is fed to the lions at the tabloids.

For the legions of “Thick of It” fans, it was probably difficult to watch. But the bleakness of Iannucci’s final act in Westminster was precisely the show’s last artistic success. The finale spelled out an essential truth about the world it so successfully (and sometimes prophetically) satirized: In politics, there really are no happy endings. One comes into contact with too many toxic agents, too many compromises with conscience. As the near-psychopathic senior press officer Jamie McDonald once barked in the show’s outstanding “Spinners and Losers” Christmas special: “This isn’t ‘EastEnders.’ This is politics. There’s no clean hands.” The best one can do is make it out of there with some humanity intact.

And, as Iannucci sees it, those who have sacrificed their basic humanity for power do not deserve to escape their reckoning. No matter how enjoyable it was to see these colorful characters play fast and loose with the levers of government all these years, Iannucci and his writers never forgot that eventually, some of the lot would have to pay the price.

Now perhaps it’s Anglophilia, but I can’t imagine we’ll see a similarly raw portrayal of the U.S.’s political class in the coming episodes of the show’s American HBO spinoff, “Veep.” We certainly haven’t seen it so far: “Veep” is a gentler, more conventional sitcom, with a correspondingly less penetrating message. Even with the same Iannucci crew involved, the American version probably can’t match the brilliance or the honesty of its British cousin, and that says something significant about the difference between politics in the U.S. and the U.K.

The plot points are broader comedy, less inherently political: VP Meyer and her staff are usually clashing over egos or zany scenarios clicked into a political template (she stresses over blogger gossip; she puts her foot in mouth during a fundraiser, etc.). But more significantly, when things do get explicitly political, the joke is never really at the politician’s expense: The real problems come from outside Meyer’s office, like the Big Oil guys stonewalling her green jobs initiatives. In “The Thick of It,” both the laughs and the cringes sprang from the fact that the real source of disaster was in full view on-screen. Special interests and corporate lobbies are secondary problems when the minister herself is, to quote Malcolm, an “omnishambles.” It’s an unceremonious appraisal of the British government, reinforced by the staggering amount of times a recent “Thick of It” plot became a real headline story.

That’s why the U.K. audience understands that even the most beloved characters from “The Thick of It” have earned their suffering. And it’s why you won’t see anyone from V.P. Selena Meyer’s staff resigning over the suicide of a health-service worker.

It’s a level of social criticism that Americans don’t seem to find as fun. Iannucci and his team see this. They’ve excluded a true Malcolm Tucker equivalent, a character that personifies the Mephistophelean spirit of the political world. My guess is Iannucci recognizes that even in the era of Jon Stewart and Stephen Colbert, and in the aftermath of Obama’s widely unsatisfying first term, many Americans still harbor hope that their politicians deserve the benefit of the doubt. Deep down we want them to succeed; we want a happy ending. The president (and vice-president) are symbols as well as — and sometimes instead of — administrators. Meanwhile the Brits have a parliamentary culture that separates the two roles, is far less deferential and actually runs on rancorous accountability. They have no problem seeing their MPs boned and gutted on Jeremy Paxman’s "Newsnight" (of which America also has no equivalent). They want politics to work, but that’s not the same as seeing politicians succeed — in fact, it might involve a good deal of entertainment watching them fail.  Save the reverence for the queen, and treat the gray ministers and civil servants with the ridicule and brutality they deserve. It makes for better satire, and in practice, better politics.

Brendan James is a blogger and reporter covering electoral politics and national affairs for Yahoo! News. He has contributed to Palestine News Network, the American Interest and the Future Forum. He lives in New York City. Follow him on Twitter @brendanjacobin