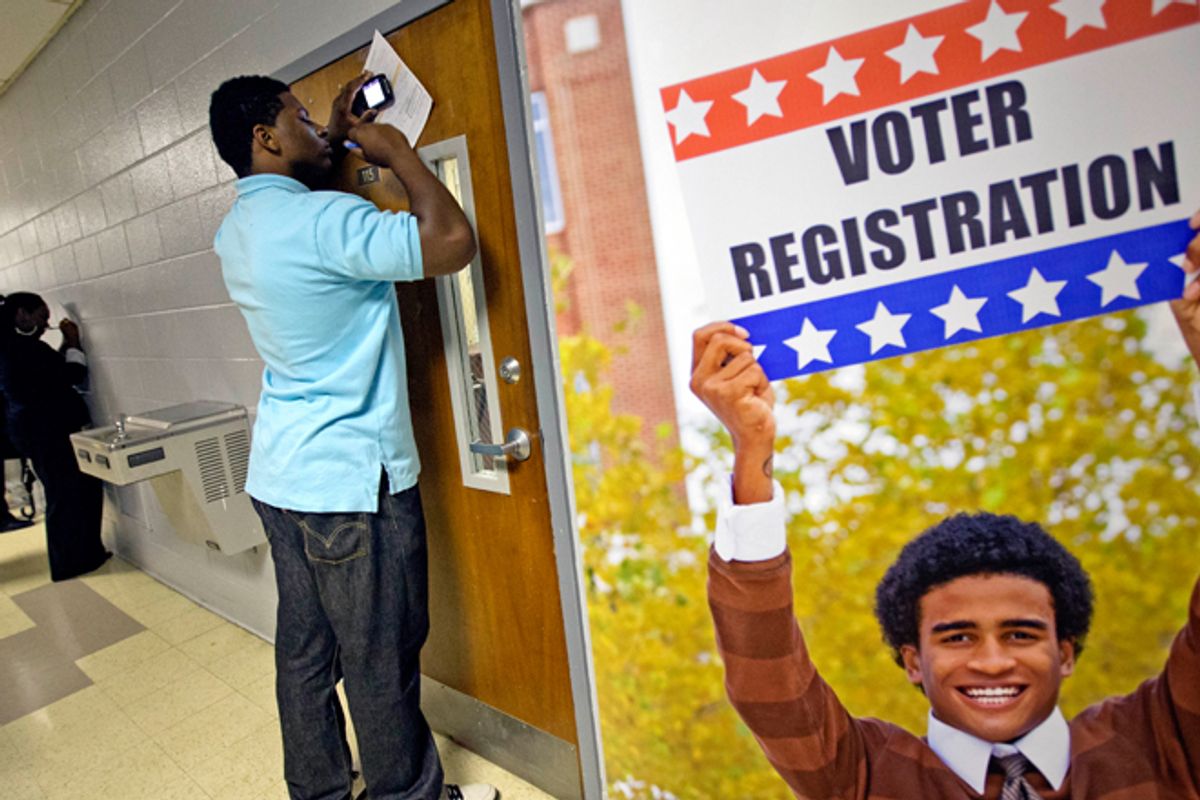 A man fills out a voter registration form in Atlanta on Sept. 12. (AP/David Goldman)
--

"Voter ID" has become the GOP's weapon of choice in the fight to keep Democrats from voting, but progressives may have found an answer: Election Day registration.

Virtually unknown two years ago, voter ID laws, which require citizens to present a certain form of government-issued photo identification at the polls, came into vogue when Republicans used their electoral gains in 2010 to pass them in states from Texas to Wisconsin to South Carolina. Approximately one in 10 potential voters in these states lack photo ID, according to the nonpartisan Brennan Center for Justice, without which they will not be able to cast a ballot in November. Studies have found that minorities, college students and poor voters -- groups that tend to vote Democratic -- will be disproportionately impacted by these new laws.

Currently in most states, residents must register to vote well in advance of Election Day. For example, residents of South Carolina this year had until Oct. 6 to register, a full month before the Nov. 6 election. EDR instead allows citizens who missed the deadline to register at the polls on Election Day.

On Nov. 6, voters in nine states — Idaho, Iowa, Maine, Minnesota, Montana, New Hampshire, Rhode Island, Wisconsin and Wyoming --  as well as the District of Columbia, will be able to register and vote on Election Day. By allowing voters to register at any point, it’s little surprise that, among the top five voter turnout states in 2008, four had EDR. Maine became the first state to implement EDR in 1973, followed shortly thereafter by Minnesota and Wisconsin. It was briefly touted by Jimmy Carter at the time as part of  a Watergate-era election reform package, but failed to gain national traction. The '90s-era Motor Voter law gave states two options: offer voter registration at state agencies or implement EDR. Most states went with the former, but Wyoming, New Hampshire and Idaho decided on EDR as a cost-saving measure. The latest wave of EDR laws began in 2005 and is continuing to spread with the help of voting advocates who tout the positive impact it's brought.
Sarah Massey, media director at Project Vote, a voting rights advocacy organization in Washington, D.C., lauded EDR as an effective tool for voting rights advocates. “It's a common-sense approach for encouraging more Americans to vote,” Massey told Salon. “If you are in favor of more Americans participating in democracy, then you are for reforms like Election Day Registration, a popular and proven practice that has boosted voter turnout.”

Nowhere was its impact more apparent than in Minnesota. The Gopher State was one of the first to pass EDR in the mid-1970s, and has since created such a strong civic culture that it led the nation last presidential election with an astonishing 78 percent voter turnout. Compare this to nearby Indiana, where citizens cannot register in the month before Election Day and must present a certain form of photo ID at the polls; just 59 percent of residents showed up to vote four years ago.

EDR doesn’t just counteract voter ID in how many people vote; it also impacts who votes. Studies have shown that young voters, poorer Americans, minorities and people who have recently moved — the same groups most affected by voter ID — particularly benefit from being able to register at the polls. Though these groups may skew Democratic, academics have found that Election Day Registration actually provides no partisan benefit.