"Biblical scholar" John McTernan is the latest to accuse them of causing massive destruction. He won't be the last 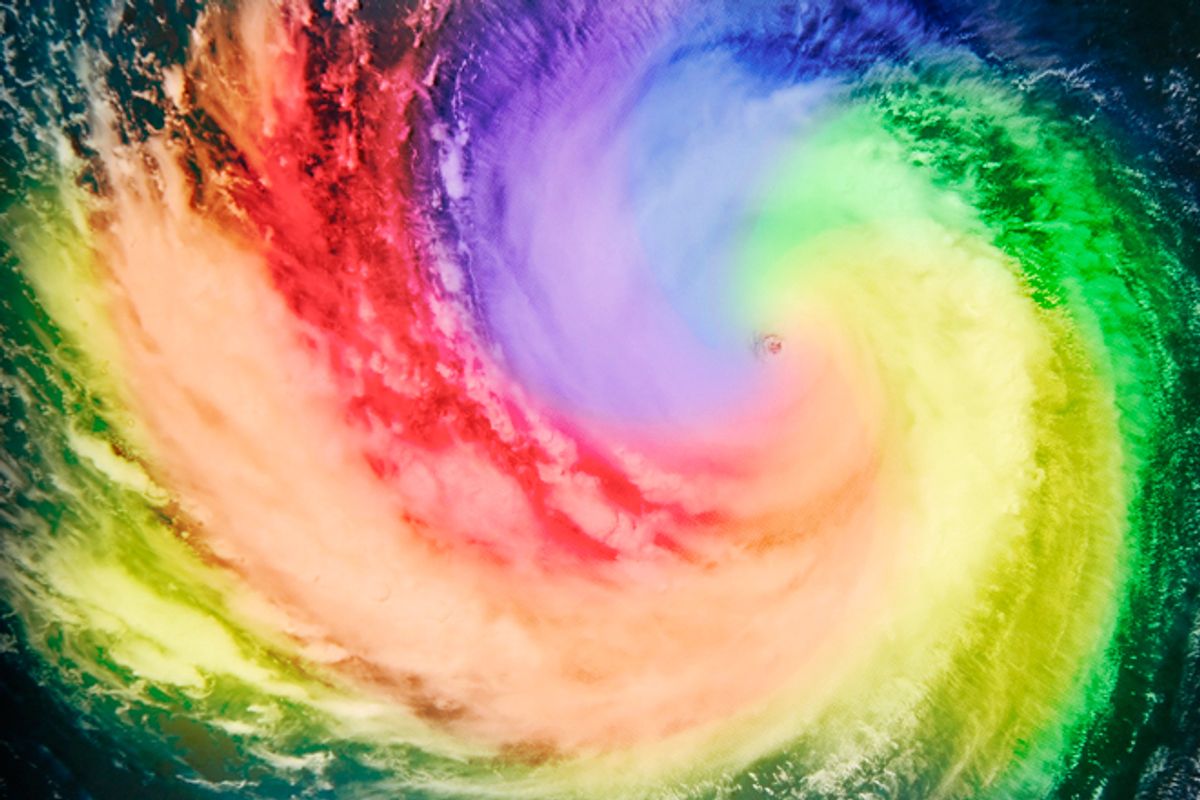 Look at what the gays have done now.

Hurricane Sandy is just the latest weather calamity being blamed on gay people. Who is doing the finger-pointing? This time, it's self-appointed biblical scholar John McTernan of Defend and Proclaim the Faith ministries in Pennsylvania, who made the connection between gays and Sandy, writing this week the hurricane is “a huge bucket of vomit in America’s face during the election,” forcing us to choose between “a pro-homosexual Mormon along with a pro-abortion/homosexual, Muslim Brotherhood promoter, Hard Left Fascist.”

Here are five other natural disasters mankind suffers because of the gay agenda:

1. Hurricane Katrina, August 2005. The grand dame of gay gales! This storm resulted in flooding 80 percent of New Orleans and 1,833 deaths, causing untold damage and the public shaming of President George W. Bush and his administration. In 2006, Megachurch Pastor John Haggee of San Antonio, Texas, said “God caused Hurricane Katrina to wipe out New Orleans because it had a gay pride parade the week before and was filled with sexual sin.” What Pastor Haggee doesn’t know is that New Orleans has a gay pride parade every weekend! God should have wiped this town out long ago starting when that French ninny Napoleon Bonaparte was marching about in his culottes and passing out copies of “Madame Bovary.”

2. The Earthquake in Haiti, January 2010. In this small Caribbean country, the Earth split open and about 316,000 people perished. The reason, according to Rabbi Yehunda Levin, spokesman for the Rabbinical Alliance of America in Brooklyn: Gays in the U.S. military. "We have seen the underground earthquake, tsunami, Katrina and now Haiti. All this is in sync with a 2,000-year-old teaching in the Talmud that the practice of homosexuality is a spiritual cause of earthquakes,” Rabbi Levin wrote the next month. “We plead with saner heads in Congress and the Pentagon to stop sodomization of our military and our society. Enough is enough.”

3. The Earthquake in Virginia, August 2011. No deaths resulted from this quake that caused about $300 million in damage in at least a dozen states. Rearranging the furniture just for the fun of it? Sounds like the gays, according to Rabbi Levin, our Talmudic scholar friend. In a video posted to YouTube the very same day, the rabbi proclaimed, “The Talmud states, ‘You have shaken your male member in a place where it doesn't belong. I too, will shake the Earth.” He also added for gays not to take it personally, but this is just God doing what God does: “We don't hate homosexuals. I feel bad for homosexuals. It's a revolt against God and literally, there's hell to pay.”

4. Hurricane Isaac, August 2012. The Gulf Coast got rocked following this slow-moving weather system, which caused flooding, wind damage and many deaths. Our man McTernan chimed in the day of the hurricane’s landfall to note that Isaac “is a biblical name meaning laughter.” Of course, McTernan meant God used Isaac’s cyclonic chops against New Orleans because it was hosting Southern Decadence, a festival giving gays from all around the nation their own opportunity to puke on Bourbon Street. Validating McTernan’s scholarship was Buster Wilson of the American Family Association of Tupelo, Miss. “There is example after example after example after example where, if the people don’t live right, God will come in sometimes – not always, but sometimes — and literally destroy a place,” he said the week of the hurricane. “I’m not saying that’s exactly why the hurricane comes to New Orleans this week … but I’m saying it does fit a pattern that there is an abundance of in scripture."

5. The Earthquake and Tsunami in Japan, March 2011. This horrible disaster resulted in 16,000 deaths and $34.6 billion in damages. In April that year, messianic mouthpiece Cindy Jacobs of the Generals International ministry of Red Oak, Texas, noted the obvious connection between an unbearable catastrophe in the Pacific and “don’t ask, don’t tell,” the federal policy that Jacobs says allows the “opening up our military to open homosexuality.” Quoting the Book of Josiah: “When we break God’s law, it actually causes cycles of nature to come afterwards.”

“It’s like we disrupted the laws of God. If this is true, what we will see natural disasters, we’ll see weather patterns going crazy, we’ll see major storms. We’ll see flooding and so forth. And this has happened. Everything we see has happened,” she said in a ministry video.

From her lips to the president’s ear: President Obama repealed “don’t ask, don’t tell” in July 2011 and, as logic would have it, Jacobs must be so elated she is now giving her overwhelming support to aid in his campaign for reelection.

No press release yet. Stay tuned.