Pictures of our dread 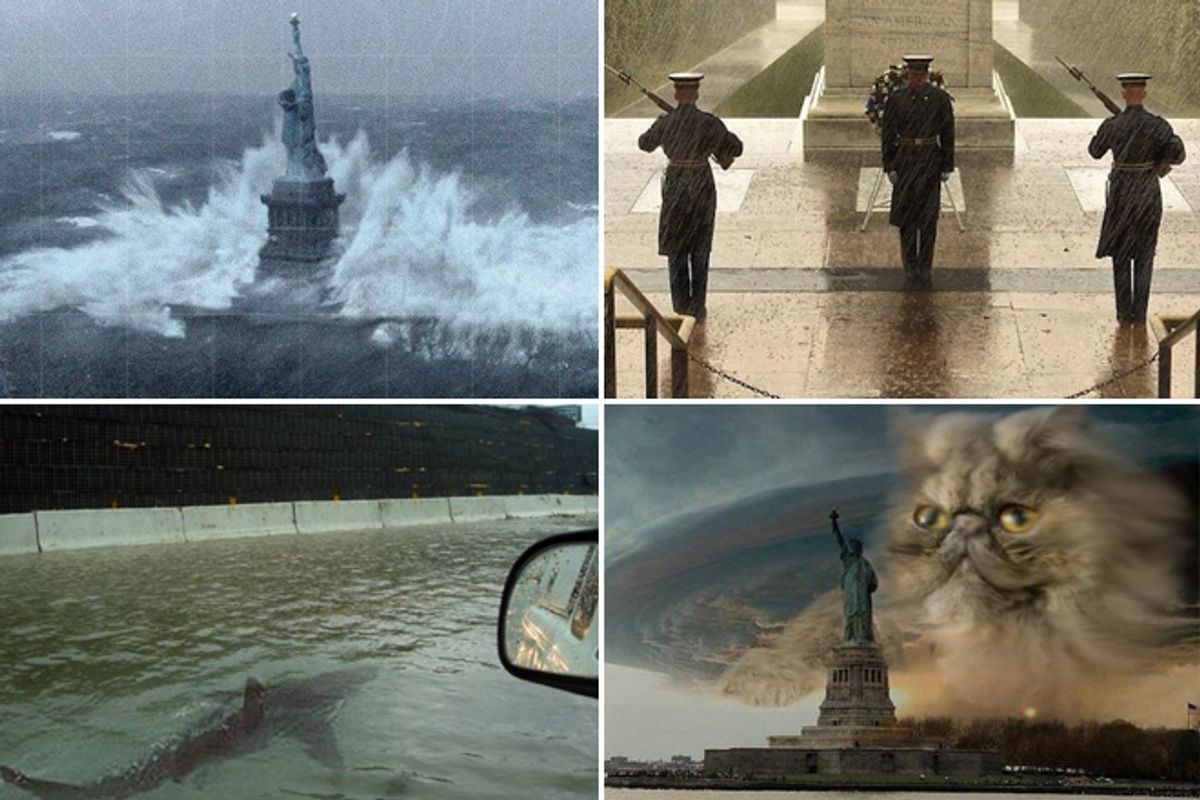 Even before Hurricane Sandy hit the East Coast, the bogus photos began to circulate on Twitter and Facebook, with several getting picked up by professional media outlets. There was a 'shopped image of the Statue of Liberty with an ominous cloud swirling behind it and a perfectly legit photo of Midtown Manhattan menaced by a similarly dark cloud — although that picture was snapped over a year ago. An inspirational image of servicemen guarding the Tomb of the Unknown Soldier turned out to have been taken on some other, more ordinary rainy day.

Added to the mix as the day progressed were raging rumors, many of which turned out to be true, about water-filled subway tunnels, mysterious explosions and the devastation of swaths of the Rockaways. However, some of these stories — of an impending Manhattan-wide power shutdown and the flooding of the stock exchange, among others -- turned out to be fake, the work of a Twitter habitue who posts under the pseudonym @ComfortablySmug. He was later revealed by BuzzFeed to be Shashank Tripathi, a hedge-fund analyst and campaign manager for Christopher R. Wight, a Republican candidate for the House of Representatives.

There's been a lot of fulmination against Tripathi -- who, it must be said, seems intent on living up to his self-description of "asshole" -- but he was only one thread in a weave of reality and unreality that swathed everyone trying to track the hurricane's progress through the region. The confusion seemed especially heightened to this New Yorker, stranded by the storm in Southern California, relying on Facebook updates and retweeted photos to get a sense of how things were going back home, and occasionally realizing that some of what we saw was seriously off. The funny thing is, I've experienced a couple of urban disasters firsthand (the Loma Prieta earthquake of 1989 and the 9/11 attack), and in both case, the sensation was strangely familiar.

In most stricken cities, only a portion of the populace is directly or dramatically affected, while the rest hunker down, famished for information and wondering if some peril is even now edging toward their doorsteps. Official reports always seem inadequate and remote; people mock the TV-news custom of stationing reporters in raincoats in front of some storm-tossed background, but often that footage tells you what you really want to know: How far the trees are bent over, whether the water is up to ankle or knee on 10th Avenue and what sort of debris can be glimpsed floating by. Unless you're wading through the flood yourself, this is how you'll experience most such disasters, whether you're in the next neighborhood or 3,000 miles away: through the media.

During the Loma Prieta earthquake, my San Francisco neighbors and I lost power for a few hours, but didn't suffer from anything worse than anxious confusion and a couple of toppled shelves. My main memory of that pre-Internet event was of huddling around a radio someone had rigged up to run off his car battery. The news that the Bay Bridge had collapsed, which conjured up images of the entire structure crumpling into the water, would have been a lot less terrifying if we could have seen photographs clarifying that one panel in the upper decks had fallen, a serious accident, but not nearly as catastrophic as we'd imagined.

In 2001, only the phones went down, and 24-hour news coverage circulated more images of spectacular mass murder than anyone wanted to look at. I remember running up and down the stairs from street to apartment, toggling between the spectacle of the burning towers and the TV, from which I hoped to glean some inkling of what the hell was going on. The street gave me the horrific thing itself, unfolding in real time, but it had no context, while looking at CNN offered me precious shreds of information to offer my neighbors, but at the cost of that detached and creepily voyeuristic sensation imparted by all media reporting on disasters.

The counterpoint of social media commentary would have been welcome that day and in the days that followed, as Bush administration officials took to the airwaves to spin the attacks for their own ends. Of course, there were many old- and new-media critics scrutinizing the official response (including Salon itself), but as we later learned, even the most established of these were not necessarily trustworthy. The diversity of Twitter, which allows well-spoken and well-informed voices to rise to the top even when they aren't affiliated with name-brand media companies, might well have cut through the fog a little sooner.

Complaints about the unique unreliability of social media and trolls like Shashank Tripathi are historically short-sighted. In the aftermath of the Oklahoma City bombing, news outlets reported that authorities were looking for two Middle Eastern men seen fleeing the scene of the crime. On 9/11, there were persistent reports of a car bomb targeting the State Department. Reporters were running with bum leads long before Twitter came along. It's no surprise that any medium that increases the availability of good information will also increase the availability of bad information.

Bogus photos, however, are a strange new form of popular expression attached to unfolding crises, hovering somewhere on the boundary between art and commentary. With Hurricane Sandy, most of the dramatic shots of recognizable New York landmarks against backdrops of storm clouds were circulated in the fairly quiet hours before the rain began to fall. It's as if the images were created and passed around because people needed pictures to equal their anxiety. How else could it be justified? Nothing that happens goes unphotographed or unvideoed anymore, and if no one produces a genuine photo of titanic clouds closing in on the Big Apple, then somebody, apparently, must make one. These weren't pictures of what was happening; they were pictures of our dread.

The freaky and unsettling thing about Sandy is that when the real photos started coming in -- of torrents gushing into that New Jersey subway station and the construction site at ground zero, or of a roller coaster subsiding in the waves -- they looked like fakes. The truly bogus photos of the flood were pretty easy to spot: Only a kid or an idiot would believe in shark fins cruising down suburban roads and scuba divers in a submerged but suspiciously well-lit Union Square station, or mistake a still from "The Day After" for a shot taken by a superhumanly daring aerial photographer. Yet the real photos -- like the images of the 9/11 attacks -- were so shocking they seemed like they could only be designed for dramatic effect, and so it became increasingly difficult to recognize the truth when it finally came along.

At the same time, some of the fake photos were so extravagantly, puckishly fake, they served as parodies of the practice of Photoshopping news events. One wag went so far as to add the face of a frowny Persian cat into the clouds behind the bogus Statue of Liberty picture. (The cat and the clouds are the same color.) That was a joke about a fake about a catastrophe, and it emerged less than 24 hours after the catastrophe itself, a chain of references so frenetically meta it makes your head swim.

This may have been what Shashank Tripathi and other fake-news purveyors intended to do, to issue dispatches no one was supposed to believe in the first place. But one rushed or irony-impaired retweeter is all it takes to seize on a bogus photo or news item and credulously pass it on. The context gets lost, and each retweeter presumes that the message comes with the considered endorsement of the person they got it from. At the same time, real people go on posting real dispatches (written and photographic) from places where real disaster has struck, dispatches we'd never get from the professional media.

The result is a crazy quilt of the true, the manipulated truth, the false, the truthy (false things that feel true), the flagrantly false (fakes so fake they shed meaningful light on the other fakes) and dozens of permutations in between. In fact, most of the bits of information we receive fall somewhere on the spectrum between the real and the unreal, as opposed to residing firmly at either end. It's not that you can believe anything you're told, or that you can believe nothing. That would be unprecedented, and it would be too easy. This may be the only unmitigated truth that social media has to offer us, but it's the one that really matters.