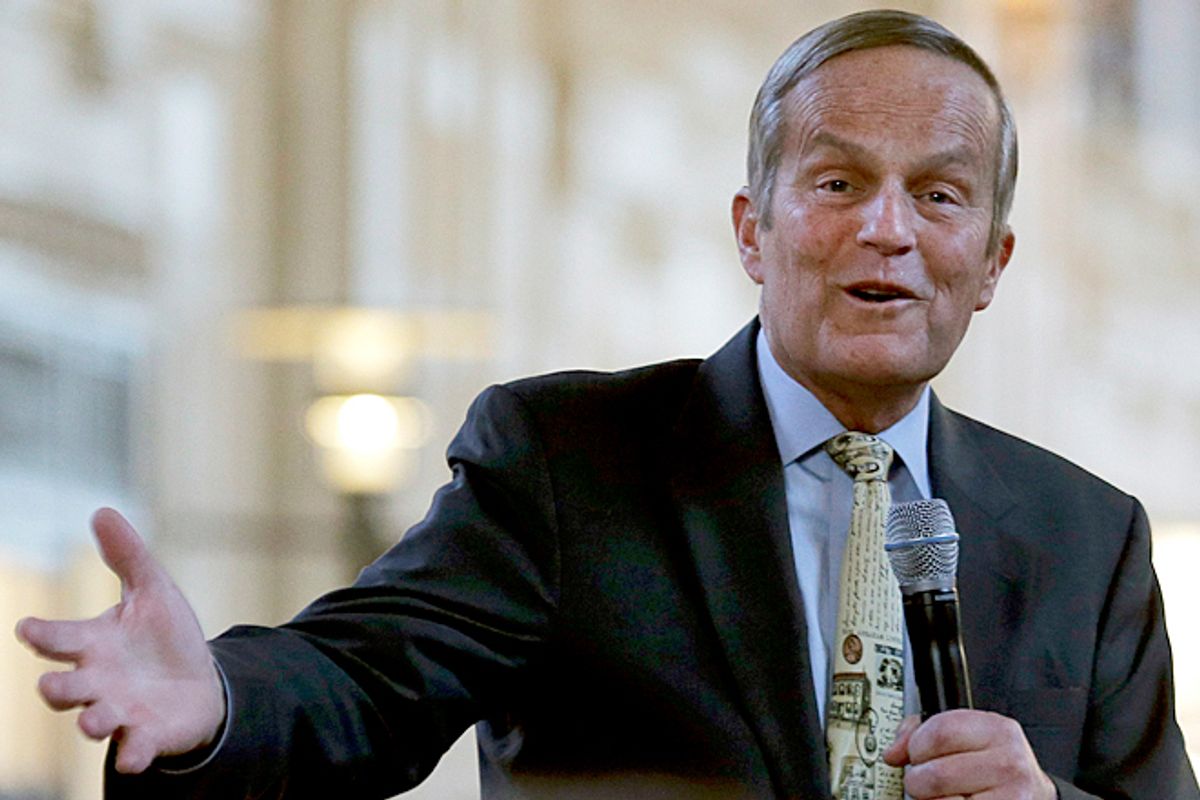 Missouri GOP Senate candidate Todd Akin not only wrote a letter praising a right-wing paramilitary group in the 1990s, but he defended the militia movement to the media and “checked out” the local group, a newly unearthed news report shows. And he did all this the month after the Oklahoma City bombing,  perpetrated by militia movement sympathizer Timothy McVeigh.

In the wake of the April, 19 1995, bombing that left 168 people dead, the Springfield (Missouri) News-Leader published a front page article on the militia movement and then-Democratic Gov. Mel Carnahan’s concern that the paramilitary activists could be a threat. The story, which has gone unnoticed in the years since, quotes then-state Rep. Todd Akin defending the movement and saying that he met with its leader and "checked out the unit." Here's the relevant portion from the News-Leader story, published on May 5:

Carnahan might not be giving the militias a chance, one legislator said. No friend of the governor, Rep. Todd Akin, R-St. Louis, said he passed up a chance to speak at the 1st Missouri Volunteers rally in March because of scheduling conflicts and because he thought the militia had to earn the community's respect. [...]

Although Akin didn't speak at the rally, he subsequently talked to the 1st Missouri's commander and checked out the unit.

"There's a lot of potential for good; on the other hand, if you let the thing be infiltrated by a bunch of Skinheads; that would be a problem," he said. A volunteer group under a unified command would have been useful during the 1993 floods and would be valuable if the New Madrid Fault snaps, he said.

Akin said he's talked to the 1st Missouri commander John Moore and considers him "a very sober fellow" and also sought the opinions of others, including a Jewish group. "I have no indication from anybody they're anything other than what they present themselves to be," he said.

Remember, this was just about three weeks after McVeigh, a militia sympathizer claiming revenge for the government's controversial raids at Waco and Ruby Ridge, committed the worst terror attack on U.S. soil before 9/11.

People for the American Way, a progressive activist group that broke the news about Akin's arrests, dug up the News-Leader article at the Library of Congress. The St. Louis alt weekly Riverfront Times posted the full story here. Akin’s letter praising the militia group has become a campaign issue several times in the past decade, and every time Akin pleaded ignorance. "I did not want to speak there ... I didn't want to have any part of it,” Akin told the St. Louis Post-Dispatch in 2000. “I didn’t know who they were, I didn’t want to have anything to do with them,” he told radio host Laura Ingraham in August of this year.

As we reported last week, there’s plenty of evidence that Akin knew members of the militia group -- Akin donated $200 to the political campaign of the militia's chaplain, Tim Dreste, a radical pro-life activist -- but the News-Leader story confirms that Akin was familiar enough with them to defend them at their lowest hour.

So what was the 1st Missouri Volunteer militia? Well, while Akin said that a Jewish group OKed his meeting with the militia, a March 1993 report from the Anti-Defamation League, which tracks radical right-wing groups, noted that literature offered at the meeting Akin was supposed to speak at included “extracts from hate publications like the Liberty Lobby's The Spotlight, The Truth at Last, published by anti-Jewish  agitator Ed  Fields  of Georgia, and  The  Jubilee, a journal  that espouses the anti-Semitic pseudo-theology of the ‘Identity Church’ movement.”

The report also noted that “several units [other militia groups] in the eastern section of Missouri appear to operate under the leadership of the St. Louis-based 1st Missouri Volunteers Militia, a group established in  January 1995 and led by John Moore.” Who is Moore? Moore -- who told Salon in August, “I’ve known Todd a long time” -- came out of the radical antiabortion movement, where he met Tim Dreste, whom he later formed the militia with.

But Moore was also a private detective by trade. And in 1996, as a candidate making a long-shot bid for the U.S. Senate, Moore suggested to the Metro Voice, a Christian paper out of Kansas City, that he mingled his professional and political lives. “For the last several years I have been providing confidential information about those who perform abortions to the Pro-Life movement. Talk is cheap, I act on my Pro-Life beliefs,” he was quoted as saying. What that means is hard to say, though it’s a bit ominous given his association with Dreste, who was later convicted of threatening abortion doctors’ lives.

Lawmakers meeting with constituents is ordinary, publicly defending a violent anti-government movement after a fatal attack is not ordinary.