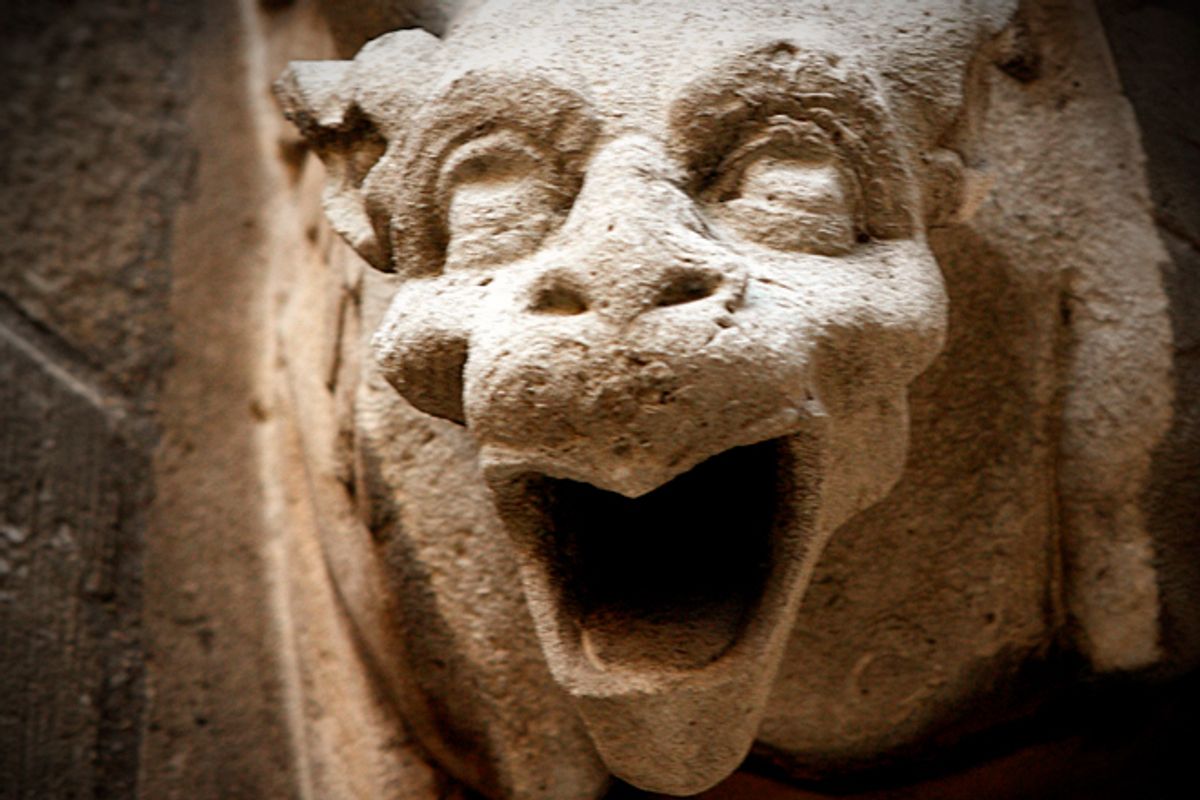 I slept in the attic.  I was put up there when I was 5 and my sister was born and she took over my room. The attic is a haven in a lot of ways — I am atop my family and can hear them moving below; I have a window seat and I can look down on the world, see the kids playing kick the can, riding their banana-seated bikes down the hill, ringing their bells, and I can watch the old people leaning into each other, walking hand in hand after dinner.

I soon realize, though, that the world doesn’t look back up. No one can see me. I have just seen “Beauty and the Beast” at Wolf Trap, the performing arts center in Washington, D.C., where I have also seen “The Music Man,” “Hello Dolly” and “The Phantom Tollbooth.” I loved these productions so much that I have signed up for a drama workshop here. But when it’s my turn to improvise onstage, I giggle with so much self-consciousness, I am told by the drama instructor to get off the stage. “You need to get into your character,” she says. “Who are you going to be?” Alas, I have always, only, been myself.

This night, two elves, their emerald green shoes curling like those of French kings, have pointed to the exit signs with green fingers, the way they’ve done each time before. And then, when the Beast comes onstage, confronting Belle’s father who has stolen her a rose, I become so terrified I cannot speak.  I can’t remember now who was with me, but I remember the alarm of being caught in the inescapable dark with an unbearable fright. I didn’t sleep that night or the next or the next and so began my relationship with insomnia, as I would wake up in the attic, paralyzed with fear, the room blanketed with silence but for the sounds of heat sighing through the vent, the creak of the house settling.

Some people spend their lives searching for this feeling. Of being terrified. But why? It’s four years after “Beauty and the Beast,” which came shortly after my move upstairs to the attic. I am sure, by then, from my perch above, that no one will hear my cries should a robber come for me, wielding an ax, or worse, if one of the hostages, recently released, and now, I feared, were wandering the streets of Washington, damaged and furious, were to take me away. My parents, tucked away in the safety of downstairs, will never sense my absence.

I go to see "Breaking Away." That is the feeling I have spent my life looking for: the feeling of watching the opening titles of "Breaking Away." But I don’t know that then, not yet, as I wait in the dark for the movie to begin.  Instead, what appears on the screen is this: “The Amityville Horror.” It’s the kind of house they don’t build anymore … The narrator — is it Vincent Price? It's certainly deep and low and Vincent Price – terrifying — begins. My insides seize. I am in the wrong theater! This is not “Breaking Away"! Again, I feel like I am going to be trapped, in the dark, with my intractable fear. Did my parents bring me here to teach me a lesson? Just as I turn to implore my mother to please take me out of the theater, this place of horror, the big creepy voice says this will be an experience in terror you will never forget. A true story. The truthiness of this family, this house, nearly undoes me. I cannot speak. And then, it ends. The Who begins to sing about their generation — sweet, sweet music — and Dennis Christopher, on his bike, his face wide and smiling, comes on the screen, and then we are bathing in dappled, Midwestern light. Oh, I am so happy to be back in the element I have staunchly stayed in: the domestic comedy-drama. The real.

And then there is Halloween. Halloween in suburban Maryland. We trick-or-treat around the neighborhood and my father hovers. We are not allowed to eat our candy before he has sifted through it, for poisons and germs and for the razor we have all heard was found in the center of an apple when a kid bit in the Halloween before. Everything bad happened the Halloween before — egged mailboxes, smashed pumpkins, a girl found weeping in the forest of the country club — and yet as we walk, I am terrified. I am in my tombstone costume — a cardboard box painted gray with Rest in Peace written, slashed, really — along the sides, my arms and legs sticking out, rendering more a robot than a gravestone. I realize now that I sound ridiculous; take away the scary bits, and I’m sort of a tough kid. I play soccer and softball; I steal the neighbors’ flowers and make prank calls with my friends. But here? Now? I am petrified of the older boys in full gorilla regalia, their faces masked, bloody hatchets at their sides. Of the kid with bloody bandages and an eye patch — is he some kind of pirate?  I’m scared of the boys swimming in their father’s suits, dressed as hobos or drunks or businessmen, the kids in rubber Nixon masks; I’m even frightened of the girls, their faces glazed in princess masks, the elastics cutting into their Dorothy Hamill cuts.  I see now the heart of the problem: no one walking my street, swinging their smiling plastic pumpkins or gripping their pillow cases, weighted with candy corn in plastic bags tied with curling ribbon, candy apples, sugar cookies shaped like witches, all of which would be later thrown away in my house, no one was themselves. Everyone’s selfness, mine included, as I hid beneath cardboard, my face gray, hair flattened beneath my mother’s old pantyhose, had disappeared. I too was unrecognizable to myself. I was horrifying.

Now, on the streets of my neighborhood in Brooklyn, Halloween is a different animal.  The candy is safely packaged, sealed up in protective layers.  The houses are close together — there is no risk of walking alone up several flights of stairs to reach a dark unwelcoming house. And in the early hours, in the light, it is a land of children. Grown-ups sit on their stoops, drinking wine, laughing at the panda bears and princesses parading by. But as the street darkens, my street, I feel that same terror I felt in the movie theater when I watched a family be terrorized in and by a house, the same terror when the Beast came onstage to confront a father of a beautiful girl. Here, no one is what she seems.