The horrors of aging

The Halloween-loving novelist, now 50, suddenly finds mortal crises in the holiday's every image 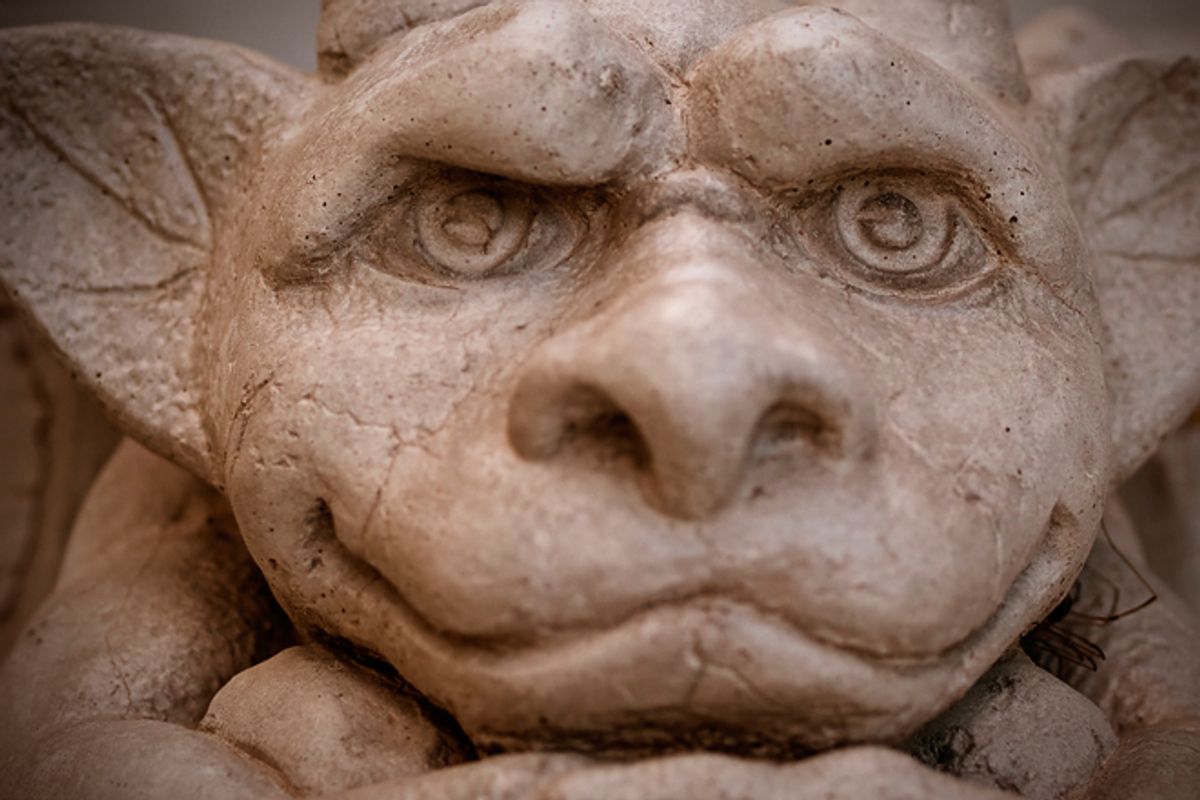 ‘Tis the season of horror and fear, along with sweets and disguises. On Halloween, kids get to assume for one night the outward forms of their innermost dread, and they’re also allowed to take candy from strangers, the scariest thing of all. Grownups, likewise, get to unleash their Ids – women dress as sluts and tarts without fearing judgment, strutting around in push-up bustiers and hanky miniskirts and stilettos, while men, gay and straight alike, can go in drag or let their inner Village People macho man out in a mustache, cowboy hat and tight pleather vest. It’s a communal bacchanal of campy, ritualized spookiness before the onset of winter, when we all retreat to our couches in elastic-waist PJs to hibernate and wait for Mardi Gras.

I haven’t worn a Halloween costume since way back in my 30s, when we hipster chicks all marched in the Greenwich Village Halloween parade dressed in our sluttiest, fishnettiest attire, a cabal of blood-red-lipped medieval serving wenches, Mad Maxine dystopian sci-fi wet dreams, and Morticia-vampiras in satiny black slip dresses with glow-in-the-dark fangs (I plead extra-guilty to the latter). Back then, my chief fear was that I would fail to achieve and do and be all the things I wanted; I frequently lay awake in bed in a wee-hour welter of panic, imagining obscurity, failure, and thwarted ambition.

Now that I’m 50 and respectably settled in New England and markedly happier and more contented than I was in my youth, I modestly hope there's time to realize some of my youthful goals before I croak, but I’ll take what I can get. Now my middle-of-the-night fears are different ones. And all of a sudden, those fake grey spiderwebs festooning windowpanes aren’t the fun, cool decoration they used to be. Now, they reverberate for me in a bone-chilling way. To put it bluntly: spiderwebs represent decay, which means death, and getting older means getting closer to dying, and therefore spiderwebs = death = me, eventually, and probably before I know it.

Even more than dying itself, I'm scared of the horror-movie changes that happen to the human body as it ages. I think of it as a sort of haunted-house effect, living inside a crumbling, creaking structure that is full of ghosts and will, some day, fall down. I’m terrified of being decrepit and gaga, weak and feeble and old — and it's coming for me. BWAhahahaha.

However, like most people my age, I love being older. I love feeling sane for the first time since I was eleven. I love the perspective afforded by having lived five decades, a degree of bemused and muted calm, a relief from the insistent demands of a turbulent ego and rampant ambition. I’d love to stay here forever. But something tells me that 50 is a sunny idyll, a temporary state of grace, a golden afternoon.

Jack O’Lanterns, those severed heads sinisterly grinning on porches and stoops, scare me now, too. They’re weird harbingers of mental decay, with their missing teeth, heads about to rot and dripping with dangling seeds on pulpy fibers, lit by a flickering candle easily blown out by any passing 5-year-old. If my mind goes, the world goes. Jack O’Lanterns remind me with visceral immediacy that I’m riding along in my skull, a wet floppy mass of cells, vulnerable and fragile.

Some day, maybe even tomorrow, those spiderwebs draped in the windows above the Jack O’Lanterns will start threading themselves across my cortex in a thickening blanket, dampening my neurons, muffling my thoughts. The spider will be waiting there, just out of sight.