The wave for Obama

As he tours Sandy devastation with Chris Christie, swing state polls break for the president 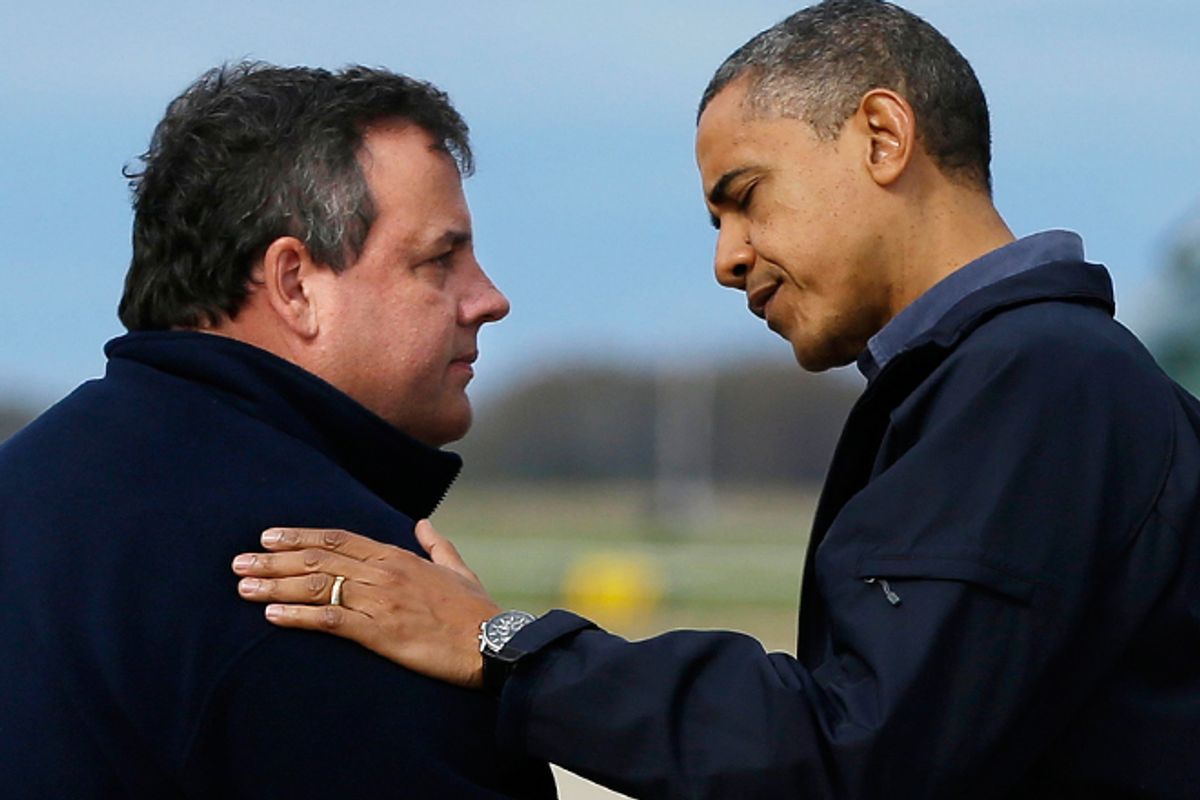 Weirdly, Mitt Romney was counting on a "wave" of anti-Obama voters to carry him to victory Nov. 6. But the waves have all gone President Obama's way, and I'm not making a tasteless Sandy joke. With reliable polls in Ohio and Wisconsin Wednesday showing Obama with solid leads there, Romney has almost no path to victory on Tuesday. Polls today also showed him holding smaller leads in the swing states of Virginia, Florida and Nevada, and tied in North Carolina.

It's still theoretically possible that lingering post-Sandy problems – and they will be massive – could sour voters' moods or hamper turnout on Tuesday. This race is still tight. But Romney's inability to close the deal after his Oct. 3 debate surge is looking permanent.

White working class voters in both Ohio and Wisconsin are key to Obama's strength there, according to the latest polls. That's why Romney has gone up with more dishonest ads, both about the auto restructuring and welfare. His campaign turned to the welfare lie in August, claiming Obama had "gutted" the program's work requirements, as polls showed Romney having trouble sealing the deal with working class whites. Campaign advisors told the New York Times anonymously that Romney was going to focus on "cultural" issues – read racial issues – to court those white voters. Romney and Paul Ryan stepped away from the welfare lies after everyone from Bill Clinton to Newt Gingrich said there was no evidence for the claim. But there it is again, in ads going up in Ohio, Wisconsin, Colorado and Florida, as Romney tries to tap into traditional white taxpayer association between welfare and minorities.

Romney's lies about the auto industry are arguably more brazen and baseless, and they've drawn unprecedented rebukes from officials at GM and Chrysler. But so far they're not working either. Even as worried Ohio Chrysler employees sought reassurance that they'd keep their jobs, polls were showing that Ohio voters believe Obama cares more about them than Romney does. Almost half of white working class voters believe the economy is getting better, which helps account for why Obama is tied among those voters while he trails by up to 30 points with the same demographic in Florida and Virginia, according to the New York Times.

In addition to continuing to lie about Chrysler and welfare, the Romney team is also claiming it's widening the race, when it's actually narrowing, by spending on advertising in the blue states of Michigan, Minnesota and Pennsylvania. On a conference call today David Axelrod promised to shave his moustache of 40 years if Obama lost any of those states, and while he wouldn't quite go that far on the question of Virginia, he said he was "confident" the president would carry that swing state, too.

I discount some of Axelrod's bluster, but it's undeniable that the Obama team is sounding confident while Romney's sounds desperate. These polls weren't timed to pick up a post-Sandy bounce for the president, assuming there is one. As I write, Obama is touring Sandy damage with New Jersey's Republican governor Chris Christie, once a top Romney surrogate, now partners with the president. The cooperation between Obama and Christie really shouldn't be remarkable. They need one another. This is the way the country used to work in times of crisis; it's only GOP extremism that makes the Christie-Obama partnership remarkable.

The criticism by Christie, Chrysler and GM is a welcome sign that Republicans and corporate leaders may learn to cooperate with the president so many of their colleagues disrespect and deride. It also tells me something else: those three titans think Romney is likely to lose, and they don't need to pay him any deference or worry about working with him in January.