With the president in office, progress -- however incremental -- remains possible. With Mitt, forget about it 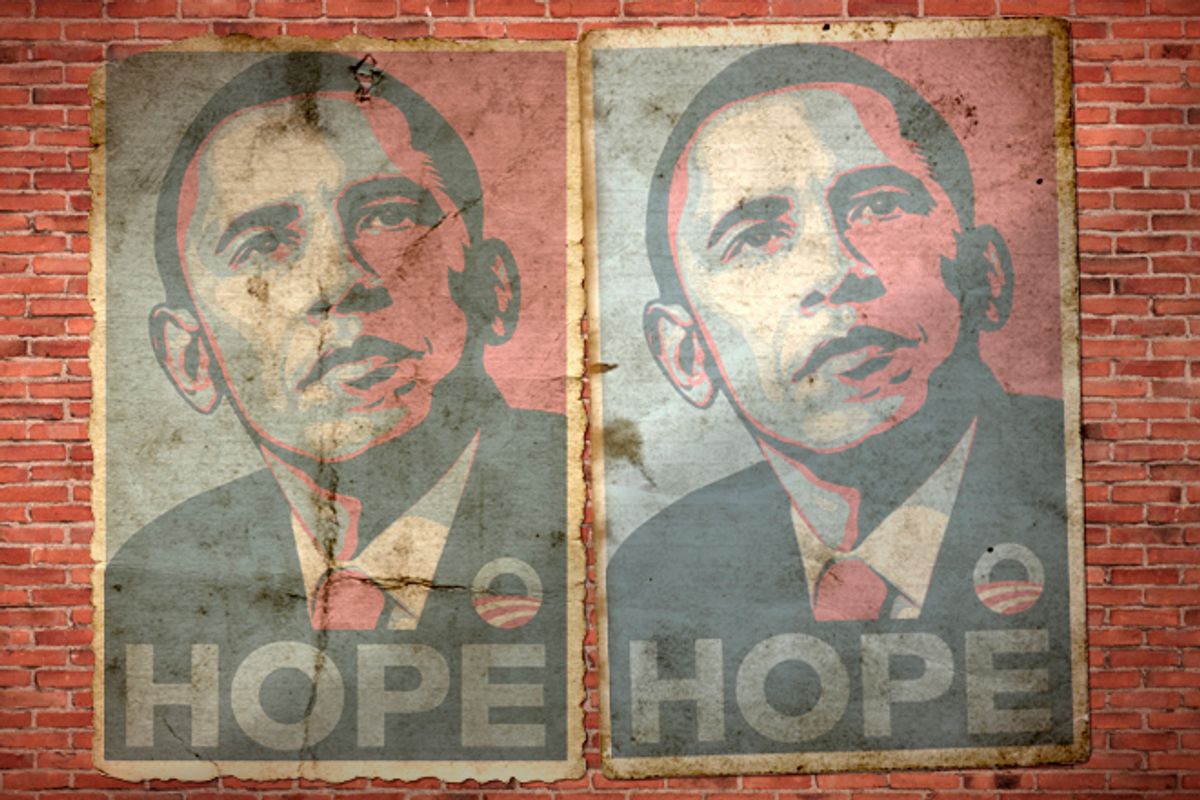 Progressives who found ourselves inconveniently placed when Sandy collided with two other storms and overwhelmed us are probably in a mood to view with particular seriousness that the Romney-Ryan budget would slash FEMA to ribbons while Obama's doesn't; and that not so long ago Mitt Romney was denouncing federal disaster relief as "immoral" (“Every time you have an occasion to take something from the federal government and send it back to the states, that’s the right direction.  And if you can go even further and send it back to the private sector, that’s even better”).

Still, we are at that point in the election cycle when some progressives have been busily listing what they despise about Democrats, going on to remind us how tired they are of lesser evils and how weary their hands grow from holding their noses.  In 2000 we were told how bad a campaign Al Gore ran, how soft he was on corporations, how little he did about climate change when he had the chance, and how pure of heart Ralph Nader was.  This year we are reminded that Barack Obama failed to close Guantánamo, kept the stimulus too small, hired Tim Geithner, dispatched drones, made up a kill list, and, like Mitt Romney, supports oil drilling and collects corporate dollars.

It remains a grave error to take your marbles and go home or vote Green.  That’s a mood, not a strategy, based as it is on a grave misunderstanding of what it means to vote for a presidential candidate.  Voting for a candidate is not like choosing a life partner.  “Liking” and “hating” are the wrong categories.  Voting is more like buying insurance. Or choosing a hiking trail.

You find yourself at the foot of an immense mountain.  You’ve heard there’s a wonderful view from the summit.  People say it’s “drop-dead gorgeous,” “not to be missed,” “once in a lifetime.”  They say “awesome,” “amazing.”  You think, What isn’t ”awesome” or “amazing” nowadays?  If isn’t amazing, it must suck.  But you pay attention because the tone of these raves doesn’t suggest “nice” or “fairly cool,” but actually sounds AWESOME and AMAZING.

But how and where to start?  Your map tells you that there’s a cabin a day’s hike up from here.  It’s said that other pilgrims have stored provisions there.  You know it gets cold up there on the heights, cold and bare, and you know that when you’re out in the wilderness, without well-lit, well-marked trails, every moment of warmth counts.  But some travelers, having returned, report that this cabin has a leaky roof.  What do you do?

It gets worse.  Some say that the cabin actually takes you to the wrong side of the mountain.  Some say there are pitfalls along the way.  Some say there are mines.  If you head for this particular cabin, even if you skirt the pitfalls and the mines, you might miss shelters to be found along other routes.  So if you head for this cabin, you might miss a better one, without leaks, better insulated.  Some hikers report that they've stopped at this particular cabin and found no provisions there.  (Others say that the provisions were stolen; others, that their timing was unfortunate.)  Some say that if you get to the cabin and stop there overnight, you’ll wake up deluded.  You’ll have been, in effect, co-opted by the cabin.  You’ll hallucinate that the summit is just over the next little hill.  You’ll get giddy with overconfidence.  You’ll stagger out the door, whooping, and the next thing you know, you’ll have stepped off a cliff.

Open Doors Are Preferable to Slammed Ones

The cabin, obviously, is Barack Obama’s second term.  It offers a prospect of shelter.  It promises nothing certain — except that there’s nothing millennial on offer in this election.  How could it be otherwise?  But voting is one thing you do in a political life, not the only thing.  If you like, think of it as a chore.  If you prefer, think of it as a duty.  It’s not an epiphany moment.  It’s not necessarily fun.  You don’t have to believe in it, or in the candidate.  You don’t have to like him.  You don’t have to drink a beer with him, let alone share his bed.  You only have to recognize a necessity.

Suppose you don’t like drone attacks, don’t like Guantánamo, don’t like oil drilling or fracking.  You don’t know who will replace Tim Geithner at Treasury — there are mixed signals.  Suppose you don’t think much of Obamacare — you wanted single payer — and you wonder what, really, push comes to shove, Obama did learn from playing at bipartisanship during his first term.  Shouldn’t it have been obvious from the start that bipartisanship is a dead letter one of the parties (the one that owns the House and filibusters the Senate to a standstill) is purely and simply plutocratic, a brain-killing, climate-change-denying, deficit-freak, Confederate-based, neocon-infused enterprise?  Yes.  But despite what Obama told Douglas Brinkley about strengthening Dodd-Frank and promoting energy efficiency in the Rolling Stone interview, it’s still possible that he didn’t learn, or at least not enough; or that he will be swayed back toward the blah center.  Will he lift his voice — and not just a single time — to explain himself to Americans who’ve heard so much about “gridlock” of indeterminate provenance; who don’t understand that too-big-to-fail banks are too big to exist; who don’t get deregulation; who don’t pay much attention to current affairs at all?  Yes, it would be nice to deprive Mitt Romney of the chance to appoint two more Supreme Court judges.  But is Obama the best we can do?

Yes, in the White House.  Not because he walks on water, not because he is always right, not because he is impervious to pressures from bad elements, not because he offers, or can deliver, guarantees.  Because the politics that matters over the long haul can be mightily helped or hindered by many forces, and one of them — not a small one — is the identity of the president of the United States.  (Another is the makeup of the houses of Congress, where the equivalent argument applies, pari passu.)  In a second Obama term, some doors open.  There’s an agenda to be shaped.  Provisions will be readied.  There is a roof.  It may be leaky.  It’s better than no roof at all — especially for the famous 47 percent you care about.  If you’re serious about a climb to the summit, you’ll avail yourself of the roof that exists, collect the leaks that get through the roof, keep them from flooding the whole floor, and keep going.

All too many of Obama’s supporters in 2008 thought that what politics required of them was a vote for the hopey-changey thing and then — nothing: a return to America’s baseline normal, where you go on about your business and leave politics to politicians.  Retirement.  Griping.  Some conducted their gripes in revolutionary lingo, some just griped.   Meanwhile, the Tea Party gathered, the Roberts court ruled in favor of Citizens United, Karl Rove & Co. spun their webs, the Koch brothers got out their checkbooks.

For the left, the game changed when Occupy erupted in all its inventiveness and audacity, but not because Occupy’s camps were sufficient.  They were necessary but not sufficient.  The camps animated just about all the anarchists and full-time radicals in America, but of these there are not nearly enough to transform the country.   Occupy also mobilized, for special occasions, tens and hundreds of thousands of union members, MoveOn-niks, and such — an outer movement, or 99 percent movement, that has a live prospect of achieving important reforms over coming years, and sustaining a shift leftward in the national balance of power.  Not because these reforms would be millennial in their import either, but because by actually improving people’s lives, they encourage a growing movement that can endure, win more support, make tangible improvements in people’s threatened lives.  Now that Wall Street has deserted Obama — Dodd-Frank is flawed, as Obama himself admits, through it goes way too far for the too-big-to-fail banks — the chance of a 99 percent movement’s decisive influence on Democrats swells.

The ability to tell the difference between movable and immovable presidents is indispensable.  With Obama in the White House for a second term, victories are possible — with a Democratic Senate, even more possible.  With Romney, doors slam shut.

National politics isn’t the only politics, but it’s indispensable politics.  Local groups are necessary — so are anti-foreclosure and debt-forgiveness campaigns — but not sufficient.  With Obama in office, criticism might count; with Romney, it turns rancid.  With Obama in office, a national reform agenda becomes more feasible.  This could include the robinhoodtax.org campaign, led by the National Nurses United, one of the more committed unions at work for serious financial reform, to load a trading surcharge onto the biggest, fastest investor-speculators, a proposal with much support in Europe.  Space opens for a push to break up too-big-to-fail banks and separate commercial from investment banking.  Statewide initiatives for public financing of elections would be encouraged.   In Maine, adult population 1 million, there’s already a 32,000 member organization, with a paid staff of 39, running a campaign for free higher education, government job creation, and shored-up healthcare for the poor.  It’s time to work out agreement across state lines on a common program.  The core of the Occupy movement rejected common programs.  So be it.  But that doesn’t mean that a 99 percent movement has to do the same.

For the left to be election-averse, disdainful of demands on mainstream politicians, amounts to a suicide gesture — while our 18th-century political system then, for years, grants a hammerlock to the Tea Party and its friends.

The landscape in which we operate is not the landscape we desire. To think that we design our landscape just as we please is delusion. To think that a Romney victory would do more to inspire opposition than slam doors on it is fantasy.  To understand that an Obama victory opens doors is to make room for ideals to breathe.