Sandy: It's a coincidence! 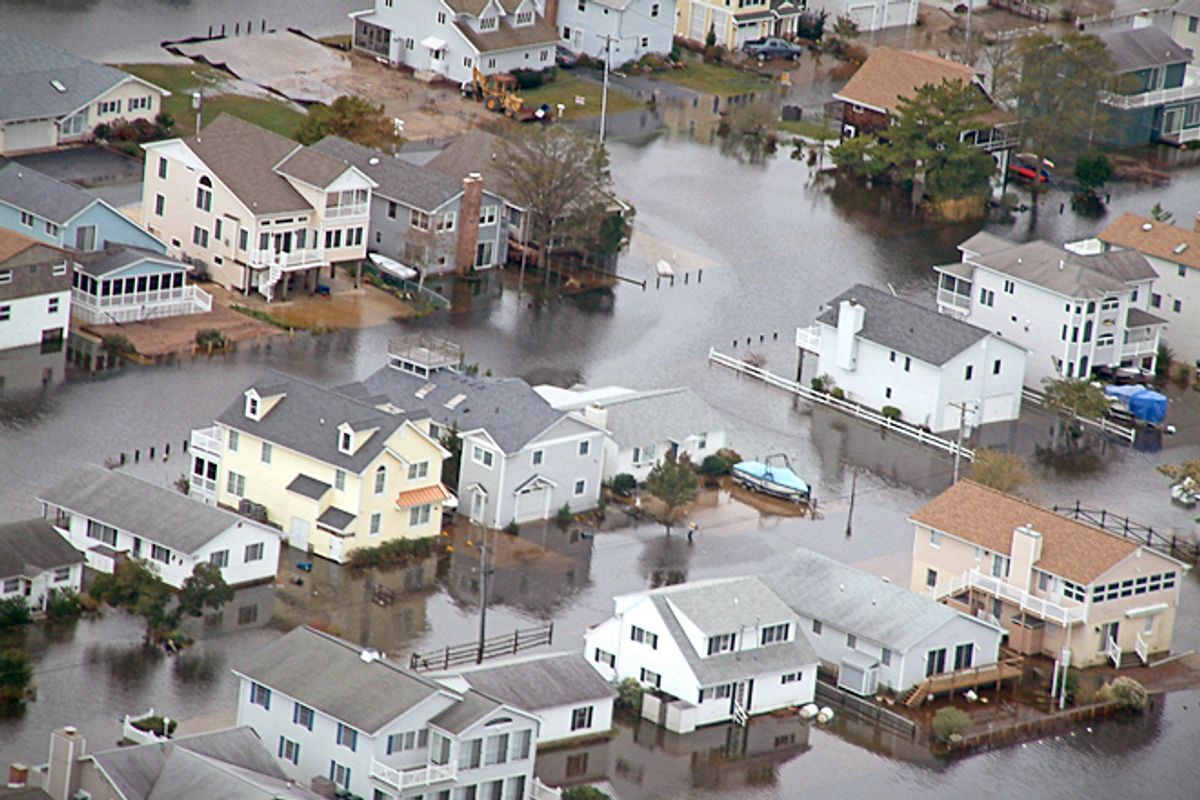 Where have all the climate skeptics gone? Sandy's devastation  provoked renewed attention to the connections between climate change and extreme weather, but so far, Republican politicians have been keeping a low profile on the topic.

But you never have to look too far to find the skeptic point of view. Case in point: ClimateDepot, my favorite one-stop shop for attacks on climate scientists and the mainstream academic consensus that man-made global warming is substantially affecting our weather. ClimateDepot is run by Marc Morano, who served as the communications director for the U.S. Senate Committee on Environment and Public Works back when Republicans controlled the Senate, and whose mission in life has long been to promote the view of his former boss, Sen. Jim Inhofe, that “global warming is the greatest hoax ever perpetrated on the American people.” Mitt Romney might be keeping his mouth shut on climate change, but you can bet your last Exxon-Mobil funding dollar that ClimateDepot will never be silenced.

And sure enough, ClimateDepot is in high dudgeon and on the warpath against what it calls "Tabloid Climatology."

"These new 'Tabloid Climatology' claims by activists attempting to link any weather event to man-made global warming are disgusting. The 'new normal' for climate activists is their ever shifting claims as they morph the entire AGW argument to focus on extreme weather. They are exploiting any weather event to promote their religious like cause and a storm like Sandy is shamelessly used to gin up fear."

I don't think Sandy really needed any help ginning up fear, at least not for residents of New Jersey or New York. Record storm surges, the annihilation of the Jersey Shore, a flooded subway system -- all things that we've never seen before -- are scary, in and of themselves.

But I'll give Marc Morano one thing. When we're talking about extreme weather, the question of whether there is a strong connection between hurricanes and global warming is an area in which there is a lot of debate and uncertainty among climate scientists. Droughts, heat waves, the melting Arctic, that's all pretty cut and dried. Hurricanes, not so much.

So it did not surprise me to see that the first quote on ClimateDepot's Sandy page was from an NOAA meteorologist, Martin Hoerling, pooh-poohing any direct link between global warming and Sandy.

"The immediate cause is most likely little more than the coincidental alignment of a tropical storm with an extratropical storm. Both frequent W. Atlantic in Oct....nothing unusual with that."

Notice the word "immediate" -- a category that does not include long-term changes in the climate, such as warming ocean temperatures, that create conditions increasingly favorable to creation of intense storms. But Hoerling's quote intrigued me -- I wanted to learn more about him and where he stood on the larger debates over climate change. It took a few seconds of Googling to find an NPR interview from July 2011 on the topic, "Will Global Warming Cause More Extreme Weather?"

The answer, according to Hoerling, is yes.

"If we look at the planet as a whole, the whole average of all months of the year, we can say with great confidence that the warming of the climate system is pretty much unequivocal, and that's based on observations. The temperature has risen. It's risen beyond what you would expect from chance...

In many ways, it's useful to think about this heat wave that we're having... Let's think about that, not necessarily worry about exactly the cause in this instant. But let's think about this as to what would climate look like in about 50 to 100 years in that region, Southern Illinois? The experiments that are used to project climate into the future are indicating that an event, a heat wave of let's say one in 100-year recurrence in the 20th century type of frequency, would happen perhaps once every 10 years, maybe once every five years.

Conditions that are so uncomfortable today - the reason that you're talking to me about this today is people are uncomfortable. If we're not adapted to the situation that we're experiencing today, we almost certainly will not be adapted to the temperature conditions that are on the horizon as we go deeper into the 21st century. So it's a good wake-up call for us as to what climate may become as we continue to increase our emissions of carbon dioxide....

The extremes that we are experiencing today may become the normals of the latter half of the 21st century.

OK -- Hoerling is talking about heat waves in this specific instance, and not superstorms. But the larger thrust of his comments is directly applicable to Morano's sneer about the "new normal" of climate activists. Call it whatever you want: "Tabloid Climatology" or merely "the consensus view of climatologists": The earth is warming. We're responsible for it. The weather is going to get worse. We'd better do something about that, before it's too late.