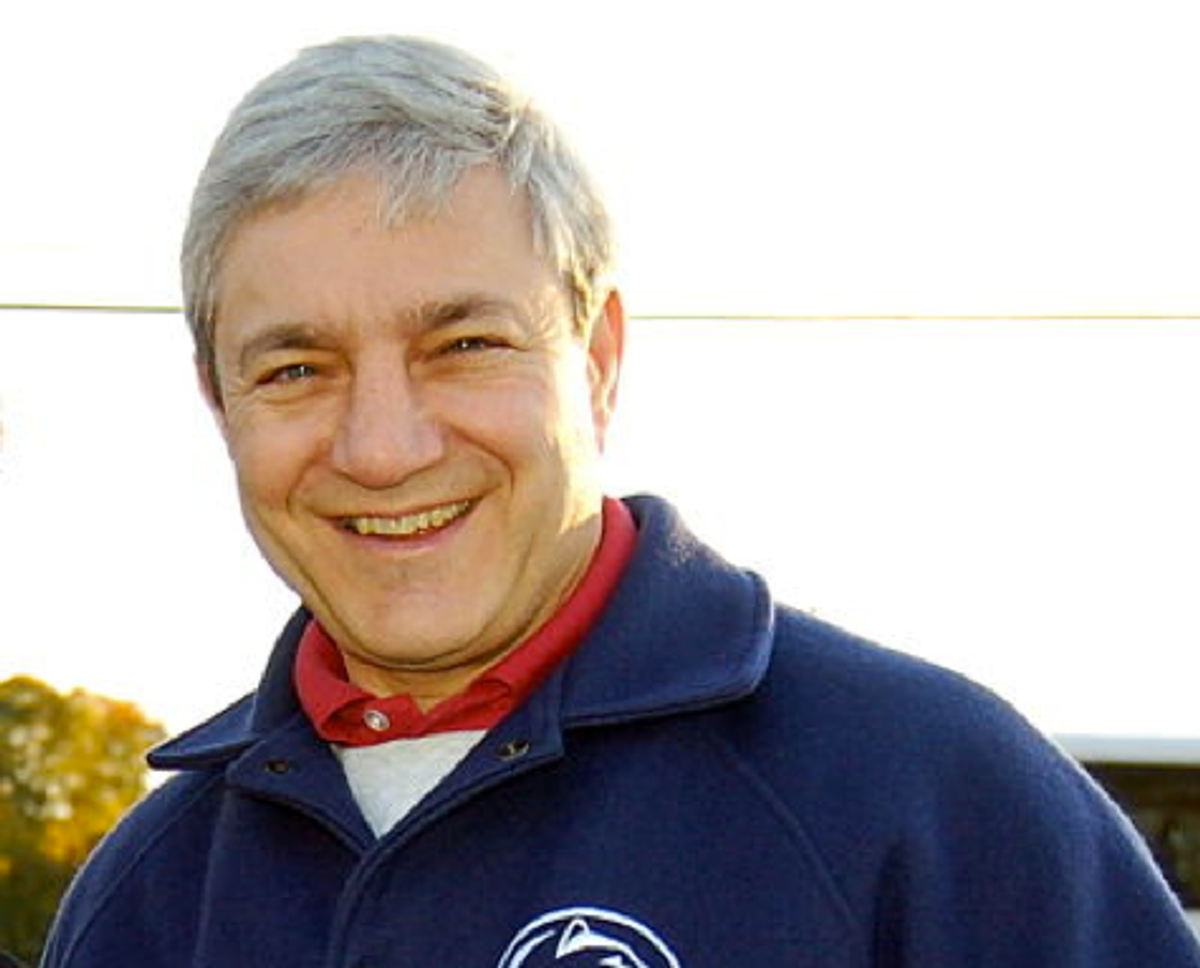 HARRISBURG, Pa. (AP) — Former Penn State President Graham Spanier was charged Thursday with hushing up child sex abuse complaints against Jerry Sandusky, taking the allegations of a "conspiracy of silence" to the highest level of the university and marking another chapter in the dramatic downfall of a once-renowned administrator.

"This was not a mistake by these men. This was not an oversight. It was not misjudgment on their part," said state Attorney General Linda Kelly. "This was a conspiracy of silence by top officials to actively conceal the truth."

Spanier's lawyers issued a statement that asserted his innocence and described the new charges as an attempt by Gov. Tom Corbett to divert attention from the three-year investigation that began under his watch as attorney general.

"These charges are the work of a vindictive and politically motivated governor working through an unelected attorney general ... whom he appointed to do his bidding," the four defense lawyers wrote.

Corbett spokesman Kevin Harley said the defense statement "sounds like the ranting of a desperate man who just got indicted."

Curley and Schultz have repeatedly asserted they are innocent. A spokeswoman for their lawyers said they planned to respond later to the new charges.

The charges were filed with a suburban Harrisburg district judge, whose office said Curley and Schultz were expected to be arraigned Friday afternoon and Spanier tentatively scheduled to appear Wednesday.

Sandusky, who spent decades on the Penn State staff and was defensive coordinator during two national championship seasons, was convicted in June of sexually abusing 10 boys over 15 years. He has maintained he is innocent and was transferred to a maximum security prison on Wednesday, where he is serving a 30- to 60-year sentence.

Curley, 58, the athletic director on leave while he serves out the last year of his contract, and Schultz, 63, who has retired as vice president for business and finance, were charged a year ago with lying to the grand jury and with failing to properly report suspect child abuse. Their trial is set for early January in Harrisburg.

Spanier, 64, of State College, had been university president for 16 years when he was forced out after Sandusky's November 2011 arrest. He remains a faculty member but was placed on paid leave Thursday.

Prosecutors said Spanier, Curley and Schultz knew of complaints involving Sandusky showering with boys in 1998 and 2001.

The grand jury report included with the charges said "the actual harm realized by this wanton failure is staggering," and listed instances of abuse detailed at Sandusky's criminal trial that happened after 1998.

"The continued cover-up of this incident and the ongoing failure to report placed every minor child who would come into contact with Sandusky in the future in grave jeopardy of being abused," jurors wrote.

Spanier has said he had no memory of email traffic concerning the 1998 complaint made by a mother after Sandusky showered with her son, and only slight recollections about the 2001 complaint by a team assistant who said he stumbled onto Sandusky sexually abusing a boy inside a campus shower.

The grand jury report indicates Curley, Schultz and Spanier told the university's lawyer they had no documents that addressed Sandusky having inappropriate contact with boys.

But Schultz did retain a Sandusky file in his office, the jury concluded, and he told his administrative assistant Joan Coble never to look at it.

"She said it was a very unusual request and was made in a 'tone of voice' she had never heard him use before," according to the jury report.

Another Schultz assistant took the file from his office at the time of Schultz's arrest, made a copy and gave the file to him, the grand jury said. Kelly said it was eventually obtained by the grand jury.

A large section of the presentment concerns Spanier's concealing details about the investigation from the Penn State board of trustees after his grand jury testimony last year. At a May 2011 trustees meeting, he was asked by the board about the matter and did not tell them it involved the school and Sandusky, the jury said.

The three men's actions were criticized in a report commissioned by Penn State and issued over the summer by former FBI Director Louis Freeh. That report concluded Spanier, Curley, Schultz and then-coach Joe Paterno concealed Sandusky's activities because they were worried about bad publicity.

Kelly sidestepped the question when asked if Paterno, who died of lung cancer in January, would have faced charges were he alive. Paterno had said he knew nothing of the 1998 complaint, but email traffic indicates he was in the loop.

"Mr. Paterno is deceased," she said. "The defendants who have been charged in this case are Curley, Schultz and Spanier, and I'm not going to speculate or comment on Mr. Paterno's relationship to this investigation."

State Police Commissioner Frank Noonan said he was not backing off his assertion last year that Paterno had a moral obligation, if not a legal one, to tell police what he knew.

"What he did, what he didn't do, Joe Paterno, you guys can decide," Noonan told reporters. "Most of this stuff is in the presentment. But that's not the point here. The point is, we have the president, the athletic director, I mean the actual top people and that's who we have charged."

Freeh's investigators uncovered emails in which the administrators discussed the 1998 complaint, including a May 5 email from Curley to Schultz and Spanier, with "Joe Paterno" in the subject line. It read: "I have touched bases with the coach. Keep us posted. Thanks."

Spanier told Freeh's team that he believed in 2001 that the encounter witnessed by graduate assistant Mike McQueary amounted to "horseplay," although an email sent by him to Curley at that time reflected a much more somber tone.

In that email, Spanier was reacting to a proposal by Curley in which they would not report Sandusky to authorities but instead tell him he needed help and that he could no longer bring children into Penn State facilities.

"The only downside for us is if the message isn't 'heard' and acted upon, and we then become vulnerable for not having reported it," Spanier wrote in 2001. "The approach you outline is humane and a reasonable way to proceed."

Spanier's lawyers have called the Freeh report a myth, and said he would have acted in 1998, 2001 or any time if he knew a predator like Sandusky was on campus.

In July, Spanier revealed in a letter to the board of trustees that he had been physically abused by his father as a child.

"It is unfathomable and illogical to think that a respected family sociologist and family therapist, someone who personally experienced massive and persistent abuse as a child, someone who devoted a significant portion of his career to the welfare of children and youth ... would have knowingly turned a blind eye to any report of child abuse or predatory sexual acts directed at children," Spanier wrote.

Associated Press writers Marc Levy in Harrisburg, Peter Jackson in Linglestown, and Maryclaire Dale and Randy Pennell in Philadelphia contributed to this report.