Experts say that sugar affects brain chemistry and contributes to alcoholism and depression. It's also my addiction 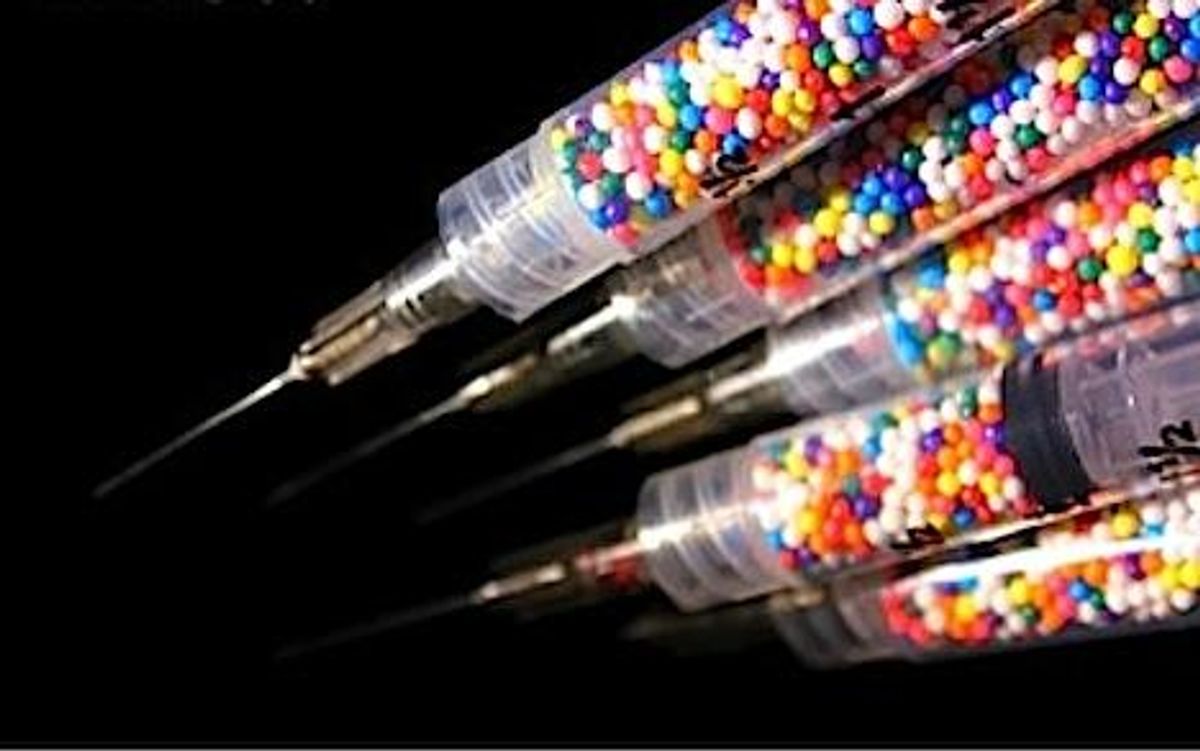 It was 11:42 pm on a Monday, and I'd just been dumped by the nice guy from Alaska. We'd been dating for three months before he realized, after a messy and recent divorce from his "best friend," that he wasn't ready to fall in love again. I'd had my doubts about our relationship, too, but I'd stuffed them down—goddammit, this was going to work.

But... It didn't work, and here I was, teary and hollow on the couch, hit by a towering wave of craving. I needed candy. Now. Not any candy—a certain kind. Rather, two certain kinds, both sold in bulk: a vaguely sour but mostly sugary "natural" gummy bear, and a bracingly sweet sort of tropical-flavored jelly bean. I knew I could find said candies at the Safeway on Market Street, so I threw on my coat, grabbed my car keys, and ignored the irritating internal voice that calculated the calories and scolded me against the sugar. I knew that voice was right—once I started, I wouldn't stop—but right now, in this miserable moment, I didn't give a shit.

What came first, the sugar or the depression? It’s hard to say for sure. I can’t remember a time when candy wasn’t my first love, my quickest and most powerful fix for insta-comfort, joy, and soothing. Nothing’s ever worked quite like it—not the antidepressants I began taking at 17 and still take now; not the alcohol I’d come to rely on throughout college and early adulthood; not the long procession of often-unavailable boys I tried to distract myself with. I can’t remember a time when I felt free of depression's constant smudge of fear, doubt, and sadness. It’s just... always been this way.

"Sugar acts like a drug in your body...It affects the very same brain chemicals that morphine, heroin and amphetamines do," writes Dr. Kathleen DesMaisons, acclaimed author of Potatoes Not Prozac, on her website. Plenty of other doctors agree—not only does sugar provide a high that's as intense and addictive as opiates, but, according to Nancy Appleton, PhD., sugar can also contribute to cancer, alcoholism, eczema, migraines, and—wait for it—depression.

So it's only natural that a sugar addict like me would become depressed, turn to sugar to soothe the depression, become more depressed when the high wears off, and so it goes, over and over, ad infinitum. The sugar and the depression have been supporting and spoon-feeding each other while keeping me locked in a painful perpetual spiral of longing and self-loathing.

I don’t fully understand where that self-loathing came from. Growing up in an upper-middle-class household in Washington DC, I had loving parents, good friends, private schools. I was cute enough, smart enough. I did fine in college; I always knew I wanted to be a writer. I had good friends. I grew up and made a life for myself in glamorous cities. I dated and had relationships of varying lengths and degrees of success (that’s an entirely different essay). In short, I never had a valid reason to hate myself (not that there is ever a good reason to hate yourself).

My best guess—and the best guess of my rotating cast of therapists—is that my distorted self-image stems from my adoption. My birth mom was 20 when she gave me up as an infant. My adoptive parents swooped in soon enough, but I was in foster care for a few months in between. Sometimes I wonder if it was that parentless interlude that did me in. Being taken from my foster family and turned over to my adoptive parents so soon after being given up by my birth mom can't have been easy on my tiny psyche. It seems reasonable that such a double-whammy abandonment would set a perfect stage for my constant fear of rejection and the sense that no one ever stays.

My adoptive parents were loving, but it was the late ‘70s and they knew little about the psychological impact of being adopted, the trauma and attachment issues that can result from being yanked from one’s blood ties so early. I don’t think they were ready for me, a sullen kid who threw raging tantrums in the checkout aisle if they refused to buy me (what else?) candy. So they indulged me, maybe more than they should have. According to family legend, my dad fed me Kool-Aid out of a bottle as an infant because it tasted better than milk and was the only thing that quieted me.

As I grew older, my palate grew more refined...um, or not. I moved from Kool-Aid to Jello Pudding Pops. From Pudding Pops after dinner to Toaster Strudel for breakfast (Pop Tarts wouldn’t do; they didn’t come with that individual packet of gooey white apply-it-yourself icing). And at some point my fixation became set on the sweetest stuff of all: candy. Not elegant desserts like cheesecake or dark chocolate, as the women’s magazines are now encouraging us to enjoy, “for the antioxidants,” in measly thumb-size doses. (Also, who is satisfied by one square of chocolate? I’d like to meet this dieting wunderkind).

It wasn’t those types of treats my whole being screamed for. It was straight-up candy: sour gummy bears; rainbow Skittles; those delicious soft German “raspberries” encased in little caviar-like sugar dots; grainy gelatin peaches and grapefruits. That’s the stuff I could eat all day and all night. The stuff I would choose to subsist on—entirely—if nutritional guidelines didn’t exist. I wanted the hard stuff. The cheap stuff. The sweetest bang for my buck.

In high school, during some of the darkest days of my burgeoning adolescent depression, I would regularly sleep over at my friend Kathy’s sprawling suburban Virginia house. We would put on our pajamas, fire up the VCR, and dump 5 or 6 super-sized bags of different kinds of candy into a big silver mixing bowl (Skittles, Hot Tamales, Swedish fish, Sour Patch Kids, et al.), and go to town, gorge ourselves. I was a bottomless pit when it came to candy. I've never once thrown up from overdoing it, and I can count on one hand the number of times I’ve gotten a sweets-related stomachache. It was like my body needed excesses of sugar to survive. A meal wasn’t complete without the closing punctuation of a sharp dose of sweetness at the end. (To this day, I’ve had a dessert of some kind after pretty much every evening meal I’ve ever had, both out and at home.)

The physical longing is for candy, but I’d be lying if I claimed my craving didn’t go deeper. It’s an internal hole I’ve tried to fill, a sadness and an emptiness where my sense of self-love should be. That's not to say the physical craving isn’t powerful and palpable; it is. And it's at its most powerful when I'm at my most vulnerable, like when my Alaskan boyfriend dumped me and I headed straight to the bulk bins at Safeway. In those moments when I've felt completely overtaken by fear, anxiety, and self-loathing—alone again, alone always—the quickest route to fleeting freedom was sugar. It always helped, if only for a moment—that giddy excitement when I had a fresh, bulging bag of gummy candy sealed in my purse, waiting to be dug into. That immediate wash of relief as my painful thoughts got drowned out by the granular sweetness hitting my tongue. I was literally sugar-coating my depression. It's also a semi-well-known fact that sober alcoholics tend to crave sweets more than "normal" folks, partially because they're still jonesing for the high sugar content of their beloved, forbidden alcohol.

I waited until I was in my early thirties to really begin looking at how sugar related to my mental health. I’d given up alcohol, which in college I’d started to rely on in a similarly escapist way. Sober and attending 12-step meetings, I began meeting women like me—women who used external substances (drugs, cigarettes, food, sex) to treat their internal symptoms. I heard these women talk with conviction about how they learned—through both simple faith and diligent practice—to sit with their uncomfortable feelings instead of blindly rushing to numb them. I related to these confessions, and began to make confessions of my own. I was forced to acknowledge how I’d compulsively used sugar as a balm for my depressed brain. Each time I shared about it in a meeting or talked about it with a friend, I felt a tiny bit less alone.

A few years ago I began meeting with Annie, a nutritional counselor who firmly believed that refined sugar was the devil. She emphasized the connection between what I was eating (crap) and how I was feeling (crap). A recovered alcoholic who once stuffed herself—and her feelings—with pizza, pasta, cookies, and gallons of Diet Coke, Annie had been off the white-sugar sauce for years. She seemed airy and glowy and (gasp!) happy. As they say in 12-Step-Land, I wanted what she had. So I began taking her suggestions and trying, as much as possible, to do as she did. I learned to cook fast, easy meals for myself at home, instead of constantly relying on take-out or frozen fare. I started experimenting with vegetables (a huge feat in itself—I was one of those rare vegetarian anomalies who didn’t like vegetables). I began avoiding refined sugar, but I still allowed myself a "healthy" dessert every night (I usually opted for fruit-sweetened soy ice cream). Slowly I began to feel a little less out of control around sugar.

I can’t claim that cutting back on refined sugar was a panacea for my depression. I only wish mental illness were so simple to treat.  But I can say that I started having fewer mood swings, and I felt a bit better about myself, self-esteem wise. Just learning how to feed myself in a nourishing fashion – vegetables, me? -- was something.

Now 35, I’m still on meds. My depression goes through peaks and valleys. Some weeks it takes center stage; some weeks it retreats to the background of my life. I may not love it, but I’ve come to accept—at least somewhat—that it’s a part of me, and it's here to stay. My love affair with sugar is still around, too. I dabble in phases of being entirely off the refined stuff, usually for a month or two. Then I'll go back to allowing myself the occasional bag of gummy goodness. Sugar still tastes deceptively like comfort, but I understand now that when it comes to my self-love-sized hole, gummy bears are just never going to cut it.