Storm-caused outages could prevent voters from casting their ballots. We should have planned for this 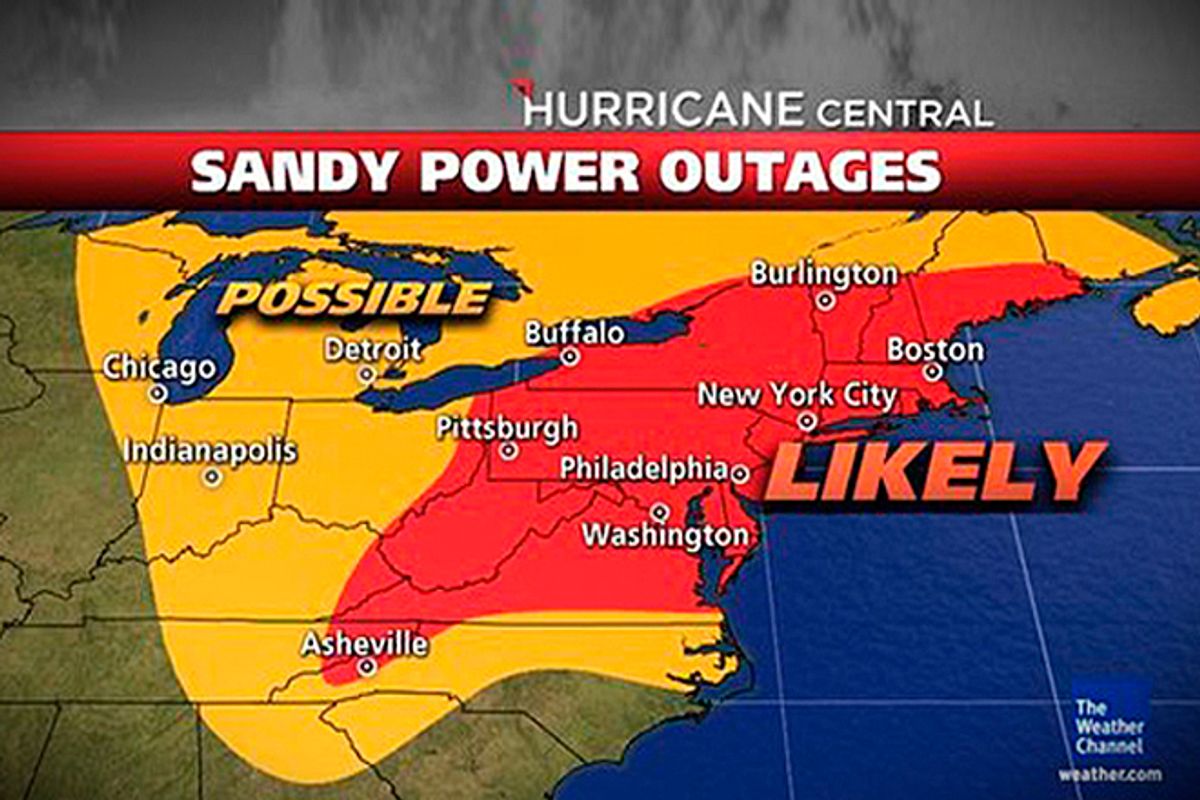 With just five days to go until the nation holds its next presidential election, power remains out in large swaths of the Eastern Seaboard, according to Google Maps' special Hurricane Sandy power outage map.

As we warned before Sandy barreled ashore earlier this week, the ability of voters to vote at all --- presuming polling places are not flooded and voters are able to get to them --- is imperiled by states such as Virginia, Pennsylvania, West Virginia, Maryland, New Jersey, North Carolina and even Ohio, all of which force all, or some of their voters to vote on systems which simply do not work if they do not have power.

While most of those states require a small percentage of emergency paper ballots be made available at the precincts, that number is unlikely to be enough in the event that voting machines are unavailable all day at the polls on Nov. 6. Moreover, battery backups on the electronic touch-screen systems are unreliable at best and, even when working, can only be counted on for a small number of hours.

In Pennsylvania, for example, as noted yesterday by the Pittsburgh Post-Gazette, "In case of power loss, local election officials are encouraged to keep enough paper ballots on hand for 20 and 25 percent of their registered voters."

While the Pennsylvania Department of State claimed in the same report that voting machines can run on backup batteries "about six hours," a Lehigh County, Pa., election official offers a more realistic assessment, noting their touch-screen system backup batteries last just 2 and a half hours at best.

The BRAD BLOG has long warned that power loss on Election Day is just another, among a myriad of reasons why forcing voters to use such systems is insane and extraordinarily disrespectful to the electorate in such jurisdictions. Other reasons why these type of voting systems should never be used: They are 100 percent unverifiable in every case (whether they include a so-called "Voter Verifiable Paper Audit Trail" or not, as some do) and computer scientists and security experts have long warned, in virtually every instance where these type of systems have been examined over the past decade, that they are both prone to failure and easily manipulated, by both election insiders and hackers alike, in ways that are unlikely to ever be detected.

At the Nation today, Ari Berman notes that "Thanks to a wave of new voting restrictions passed by Republicans, the 2012 election was already shaping up to be pretty chaotic before the arrival of Hurricane Sandy, which left 8.2 million households without power in 15 states and the District of Columbia."

He then goes on to detail some of the worst hot spots for concern ...

"As of Wednesday, power outages were the most severe in New Jersey (2.4 million homes and businesses without power), New York (1.9 million) and Pennsylvania (1.2 million)," Berman reports. While almost the entirety of both New Jersey and Pennsylvania force voters to use electronic voting systems on Election Day, New York at least allows voters to cast their vote on paper ballots. Though those paper ballots are tallied on electronic systems that routinely fail to tabulate votes accurately (see thousands of votes completely lost on NY's brand new optical-scan systems in 2010, and losing candidates named as "winners" by Palm Beach County, Fla., earlier this year after their paper ballot op-scan systems declared incorrect results in three different races), at least voters will be able to vote if polling locations are open and voters can get to them next Tuesday.

If optical-scan systems at the precinct are unavailable due to outage in New York jurisdictions, those ballots can be tabulated later (presuming the secure chain of custody is up to snuff) either on central optical-scanners at county headquarters or, better yet, transparently and publicly by hand.

Berman notes that the Washington Post is reporting that Pennsylvania officials "said that getting all the polls open in all sixty-seven counties on Election Day may be problematic. About 1.2 million customers in Pennsylvania lost power in the storm, and utilities warned that full restoration might be more than a week away. All of the nine counties with the bulk of the power losses went for Obama in 2008."

Our own missives to Philadelphia's election chief Stephanie Singer have gone unanswered over the past several days. She is usually quite responsive, so we suspect she's struggling at this point to figure out how to ensure polls are opened and that voters get to vote. In the City of Brotherly Love voters are forced to vote on 100 percent unverifiable electronic touch-screen systems on Election Day, unless the systems are unavailable. Whether there will be enough emergency paper ballots, however, for all voters in such case, is another issue entirely.

(Also, see this, for still more concerns about voting in the Keystone State in the wake of Sandy.)

"Nine Virginia communities—including several in Northern Virginia that were key to President Obama’s victory in the commonwealth in 2008—remained closed for in-person absentee voting Tuesday in the aftermath of Hurricane Sandy," the Post also reports. Virginia also forces almost all of its voters to use electronic touch-screen systems on Election Day.

Many have asked about whether Election Day can be postponed, given the disaster. That question is not an easy one to answer. Slate's L.V. Anderson attempted to answer that question before the storm hit. Essentially, it would be difficult, both legally and politically. While the date of Election Day is set by federal law --- so Congress would have to reconvene to change the law for the entire nation --- states have some latitude as far as when they must complete the process of selecting their electors before the Electoral College meets in mid-December. Changing the date of the election in parts of the country, but not others, however, would be fraught with all sorts of political and legal peril and controversy.

While nobody can predict the devastation of natural disasters like Superstorm Sandy, and whether such storms might make polling places inaccessible or difficult for voters to reach, they can predict that power outages on Election Day will keep voters from being able to cast their vote at all if electronic systems are the only option allowed for voters. That so many states still continue to do so is shameful and should outrage every American, not to mention those who are forced to use such systems.

That part of the problem was perfectly predictable. Indeed, we have been warning about it at The BRAD BLOG for many years. That elected officials and election officials have chosen to do nothing about it for so many years, preferring to play with fire instead, while treating their voters with extraordinary disrespect, is just another cause for demanding that lawmakers bar such systems for use in American elections.