Romney or Obama and the Supreme Court: Does it even matter?

A Romney presidency isn't an automatic judicial disaster. Not if Democrats get principled and oppose his nominees 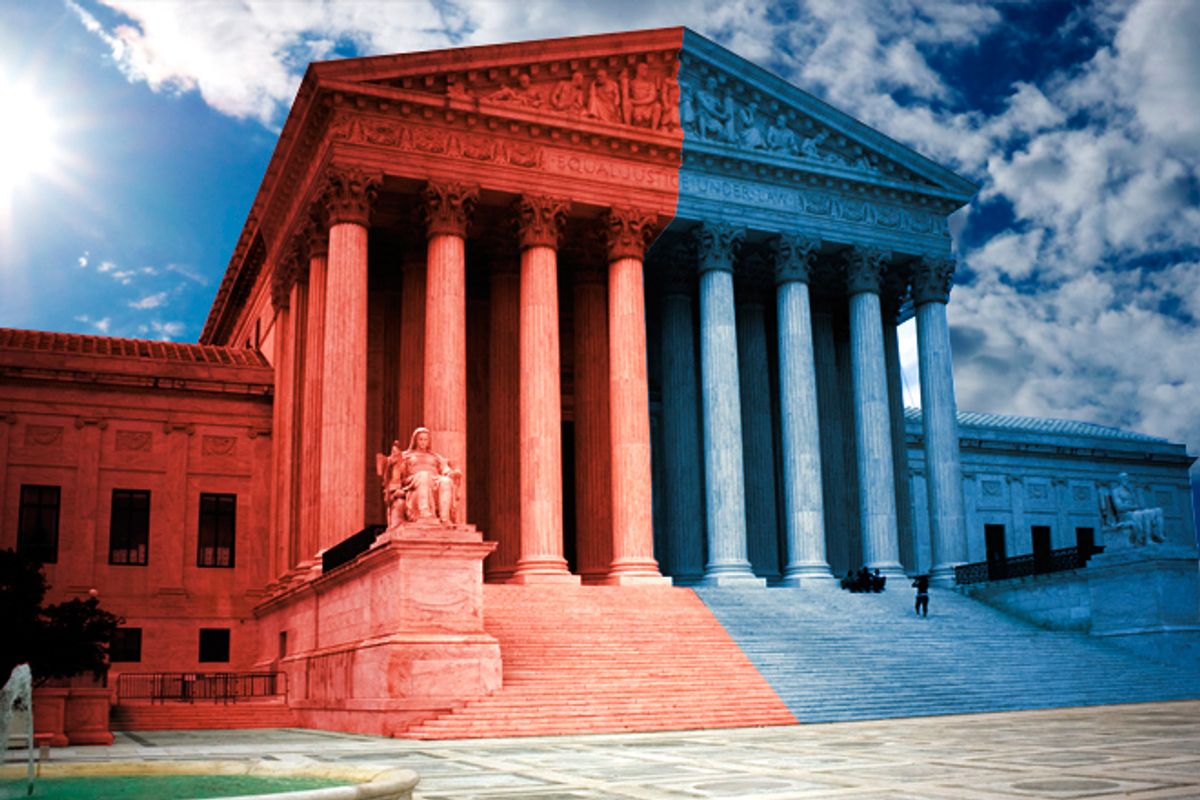 With only a few painful days left in the 2012 campaign, it's worth noting one last time that as our nation's politics lurches rightward, there are vanishingly few Democratic-leaning Americans willing to be even minimally honest about President Obama's betrayals of his progressive campaign promises in 2008, and even fewer willing to publicly admit that on many major issues, the Democratic nominee holds the same or similar positions as Republican nominee Mitt Romney.

Though significant, this reality is not altogether surprising. Two billion dollars worth of campaign spending by the campaigns and billions of dollars of additional politicized news coverage feeds us what MSNBC's Lawrence O'Donnell aptly labels "a drug called the two party system." All of that predictably convinces many Americans to see the world in red-versus-blue terms -- the kind that pretends there are epic differences on everything between the two parties.

What is surprising is the argument that seems to be the trump-card conversation-ender about the Supreme Court. Yes, even among those relatively few Democratic politicians and activists who are open to discussing the painful truths about the two party duopoly, the gut-wrenching discourse typically ends when nominees to the highest court are mentioned. The central assertion in Democrats' Supreme Court Argument is that even if you admit all of Obama's betrayals, even if you admit the danger of him inevitably facing no liberal opposition to further betrayals in his second term, and even if you admit that on some issues the political dynamics may create worse outcomes under a second Obama term than under a President Romney, nonetheless, the next president will likely get to appoint a few of the Supremes. This, suggests the argument's proponents, means Obama is the only choice for president for anyone on the left.

It is a seemingly simple, self-evident and innocuous assertion (thus, why it often ends conversations). However, if you ponder its central premise for more than a second, you realize it is anchored in a deeply disturbing and damning admission about the Democratic Party as a whole.

Before we get to that, let's first ask whether, on the surface, the Supreme Court argument is even valid. Looked at through the prism of history, the answer is murky at best. Recall that Republican presidents in the past have appointed some of the court's most liberal voices, from Eisenhower nominee Earl Warren to Ford nominee John Paul Stevens to Bush I nominee David Souter.

But let's say you are willing to discount that; let's say you believe Republicans have perfected the art of litmus testing their nominees for maximum conservative impact and purity. Now, let's ask the more disturbing question about Democrats and their Supreme Court Argument: namely, what are they really saying when they specifically insist Romney must be defeated to prevent his presumably ultraconservative nominees from getting onto the court? They are actually making the self-incriminating admission that they know their own party will not use their powers in the Senate to vote those nominees down. In constitutional "advice and consent" terms, they are too willing to consent to any jurist -- no matter how extreme -- a Republican politician nominates. In fact, while Ronald Reagan and George W. Bush did withdraw nominations on their own, Democrats haven't actually mustered the courage to vote down a Republican Supreme Court nomination in more than a quarter-century.

Here we see a hideous and revealing contradiction. We are at once expected to believe the Democratic Party is so committed to its alleged progressive jurisprudential agenda that its president will definitely nominate genuine progressives to the highest court (more on that in a second). And yet at the same time, we are also expected to believe that the Democratic Party is so clearly uncommitted to that same progressive agenda that its senators are all but guaranteed to let ultraconservatives ascend to the Supreme Court when a Republican president is elected.

Figuring out which side of this contradiction is true and which side is false gets to the most important issue of all: what the Democratic Party stands for, or doesn't stand for. Is the party so devoted to its own stated jurisprudential agenda that its president will in fact nominate real progressives and its senators will in fact filibuster ultraconservatives? Or does the party care so little about its own stated agenda that its president won't necessarily nominate genuine progressives and its senators will vote for ultraconservatives? Two parts of the record suggest the latter.

First, there's Obama's appointments. Even on the issues like abortion in which there seem to be real differences between the parties, his nominees have been underwhelming from a progressive perspective.

"Obama’s track record is not actually that good [on court nominees]," noted Matt Stoller here at Salon. "As a senator, Obama publicly chided liberals for demanding that Sen. Patrick Leahy block Sam Alito from the Supreme Court. Meanwhile, Obama-appointed Supreme Court Justice Sonya Sotomayor has in her career already ruled to limit access to abortion, and Elena Kagan’s stance is not yet clear."

Likewise, Senate Democrats provided little serious opposition to either of George W. Bush's ultraconservative nominees, John Roberts and Samuel Alito -- and that's putting it mildly. Indeed, Democratic leaders were apparently so willing to abandon the core liberal convictions they supposedly hold that they immediately conceded on Roberts from the get-go, and preemptively crushed any effort within their midst to mount a filibuster against Alito.

Of course, this doesn't totally undermine the 2012 application of liberals' now-standard Supreme Court argument. That's because there's a grain of truth in it. Yes, despite recent apologies for past behavior, the Democratic Party has indeed so consistently proven itself to be unserious about the principles it pretends to hold - the principles they insist we must elect them to protect! - that it is rational to now believe the party will refuse to make even a mild effort to stop a Republican president's ultraconservative judges. Hence, there's a certain twisted logic to casting a presidential vote exclusively to try to prevent the party's disloyalty to its own stated agenda from paving the Senate path for an even more conservative court.

That said, just remember that every time the Supreme Court argument is aired as a means of shutting down a discussion about inconvenient truths, the arguments' proponents are openly admitting that nobody should believe today's Democratic Party is for what it says it is for. After all, the argument's core assumption about a guaranteed lack of Senate Democratic opposition to GOP nominees is an acknowledgment that when it comes to wielding power, the party is often actively complicit in enacting the very agenda it pretends to oppose.

That's not a truism that should end a conversation -- it's a troubling admission that should initiate a much bigger one.