Subway creaks back into service

In Manhattan, the trains only ran north of 34th Street, unable to travel through flooded tunnels downtown 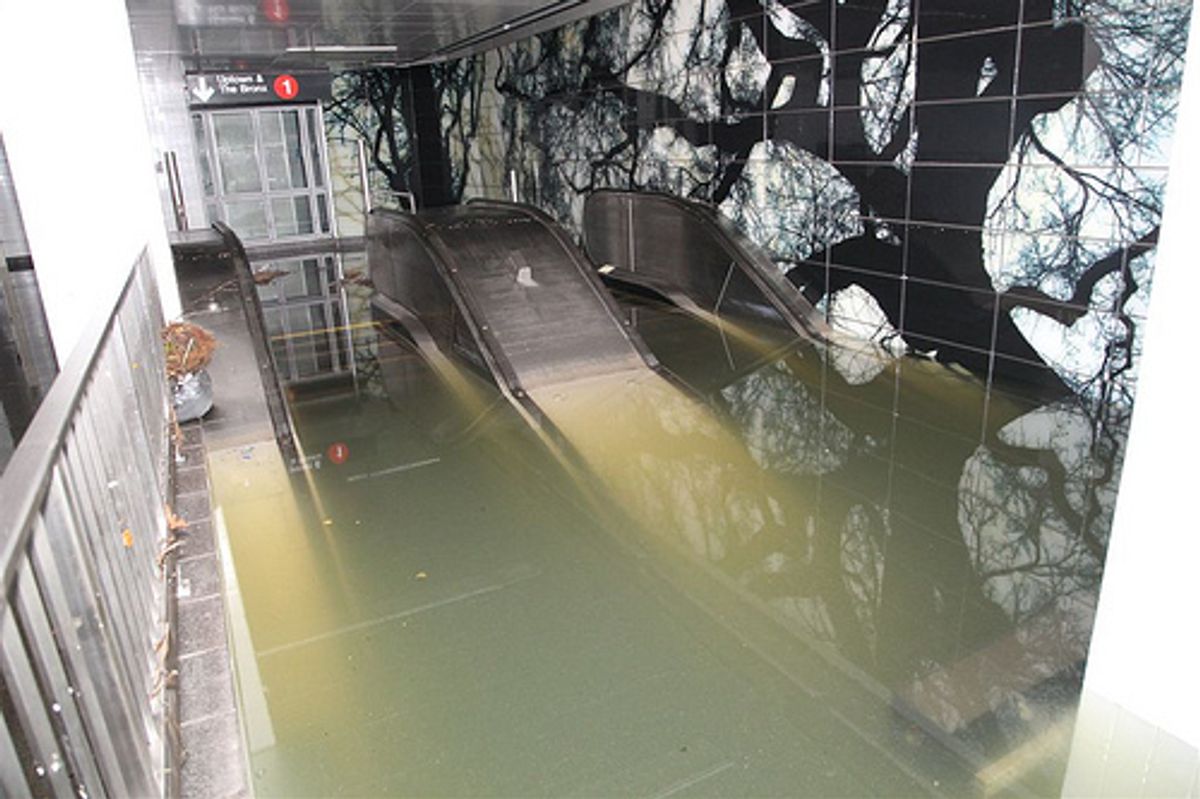 NEW YORK (AP) -- New York tried to resume its normal frenetic pace Thursday, getting back much of its vital subway system after a crippling storm, but was l slowed by gridlocked traffic.

Commuters lined up at Penn Station to board uptown trains at 6 a.m. Technology worker Ronnie Abraham was on one of them, hoping to get home to Harlem, a trip that is 20 minutes by train and 2 1/2 hours by bus.

"It's the lifeline of the city," Abraham said. "It can't get much better than this."

Ray Dunn, a paramedic, was trying to get work in the Bronx for the first time since the storm barreled up the East Coast, killing more than 70 people, devastating coastal communities and leaving millions without power from New Jersey to the West Virginia mountains.

"There's no way to get to work unless you drive," said Dunn, who doesn't own a car.

After reopening its airports, theaters and stock exchange, city officials hoped the subways would ease the gridlock that had paralyzed the city, forcing cars and pedestrians to inch through crowded streets without working stoplights. But television footage Thursday showed heavy traffic crawling into Manhattan, as police turned away cars that carried fewer than three people - a rule meant to ease the congestion that paralyzed the city earlier this week.

And the platforms weren't crowded; a dozen people at a time waited on platforms. An F train headed to a bus stop in Brooklyn rolled in near silence, with just a fraction of its normal load, then sat in a station for 15 minutes while the train waited for a space in the next station.

In Manhattan, the trains only ran north of 34th Street, unable to travel through flooded tunnels in downtown Manhattan and Brooklyn. The stalled service didn't impress Yukun Yang, a college student who said his home city of Guangzhou, China, would have weathered the storm better than New York.

"We have hurricanes and subways in my city, and we handle it much better," he said. "Hurricanes are normal and they don't stop the subways."

The decision to reopen undamaged parts of the nation's largest transit system came as the region struggled to restore other basic services to recover from the storm. LaGuardia Airport opened Thursday morning for the first time since the storm, a day after the region's other two airports reopened.

Across the region, people stricken by the storm pulled together, in some cases providing comfort to those left homeless, in others offering hot showers and electrical outlets for charging cellphones to those without power. The spirit of can-do partnership extended even to politicians, who at least made the appearance of putting their differences aside to focus together on Sandy.

Obama joined Republican Gov. Chris Christie, who had been one of the most vocal supporters of Republican presidential hopeful Mitt Romney, to tour the ravaged coast. But the two men spoke only of helping those harmed by the storm.

That was already beginning Wednesday, when masses of people walked shoulder-to-shoulder across the Brooklyn Bridge to Manhattan for work, reversing the escape scenes from the Sept. 11 terror attack and the blackout of 2003. They reached an island, where many people took the lack of power and water and transportation as a personal challenge.

On Third Avenue, people gathered like refugees around a campfire. But instead of crackling flames, their warmth came from more advanced technology: a power strip that had been offered to charge cellphones.

At a fire hydrant on West 16th Street, 9-year-old Shiyin Ge and her brother, 12-year-old Shiyuan Ge, stood in line to fill up buckets of water. But unlike the adults, the two kids held plastic Halloween candy pails painted with grinning jack-o-lanterns.

"There's no water in our house," said Shiyin Ge, who had planned to dress up as a ladybug for Halloween.

Downtown Manhattan, which includes the city's financial district, Sept. 11 memorial and other tourist sites, was still mostly an urban landscape of shuttered bodegas and boarded-up restaurants, where people roamed in search of food, power and a hot shower.

The airports and subways weren't the only transportation systems returning to the region. Suburban trains started running for the first time on Wednesday, and Amtrak's Northeast Corridor was to take commuters from city to city for on Friday for the first time since the storm.

From West Virginia to the Jersey Shore, the storm's damage was still being felt, and seen.

In New Jersey, signs of the good life that had defined wealthy shorefront enclaves like Bayhead and Mantoloking lay scattered and broken: $3,000 barbecue grills buried beneath the sand and hot tubs cracked and filled with seawater. Nearly all the homes were seriously damaged, and many had entirely disappeared.

"This," said Harry Typaldos, who owns the Grenville Inn in Mantoloking, "I just can't comprehend."

Farther north in Hoboken, just across the Hudson River from Manhattan, nearly 20,000 residents remained stranded in their homes, amid accusations that officials have been slow to deliver food and water. One man blew up an air mattress and floated to City Hall, demanding to know why supplies hadn't gotten out. At least one-fourth of the city's residents are flooded and 90 percent are without power.

The outages forced many gas stations across the state to close, resulting in long lines of people looking to fuel cars and backup generators. Darryl Jameson of Toms River waited more than hour to get fuel.

"The messed up part is these people who are blocking the roadway as they try to cut in line," he said. "No one likes waiting, man, but it's something you have to do."

On New York's Long Island, bulldozers scooped sand off streets and tow trucks hauled away destroyed cars, while residents tried to find a way to their homes to restart their lives. Joanne and Richard Kalb used a rowboat to reach their home in Mastic Beach, filled with 3 feet of water.

Her husband, exasperated by the futility of their effort, posted a sign on a telephone pole, asking drivers to slow down: "Slow please no wake."

Snow drifts as high as 5 feet piled up in West Virginia, where the former Hurricane Sandy merged with two winter weather systems as it went inland. Heavy snow collapsed parts of an apartment complex, a grocery store, a hardwood plant and three homes. The sixth person killed in the state was a candidate for the state House of Delegates, John Rose Sr., who was struck by a falling tree limb. His name will remain on the ballot on Election Day.

A few more inches might fall in West Virginia, but meteorologists said Sandy's days are numbered. The National Weather Service said Wednesday that the last remnants of the storm are in the Appalachian Mountains, and will be gone by the end of the week.