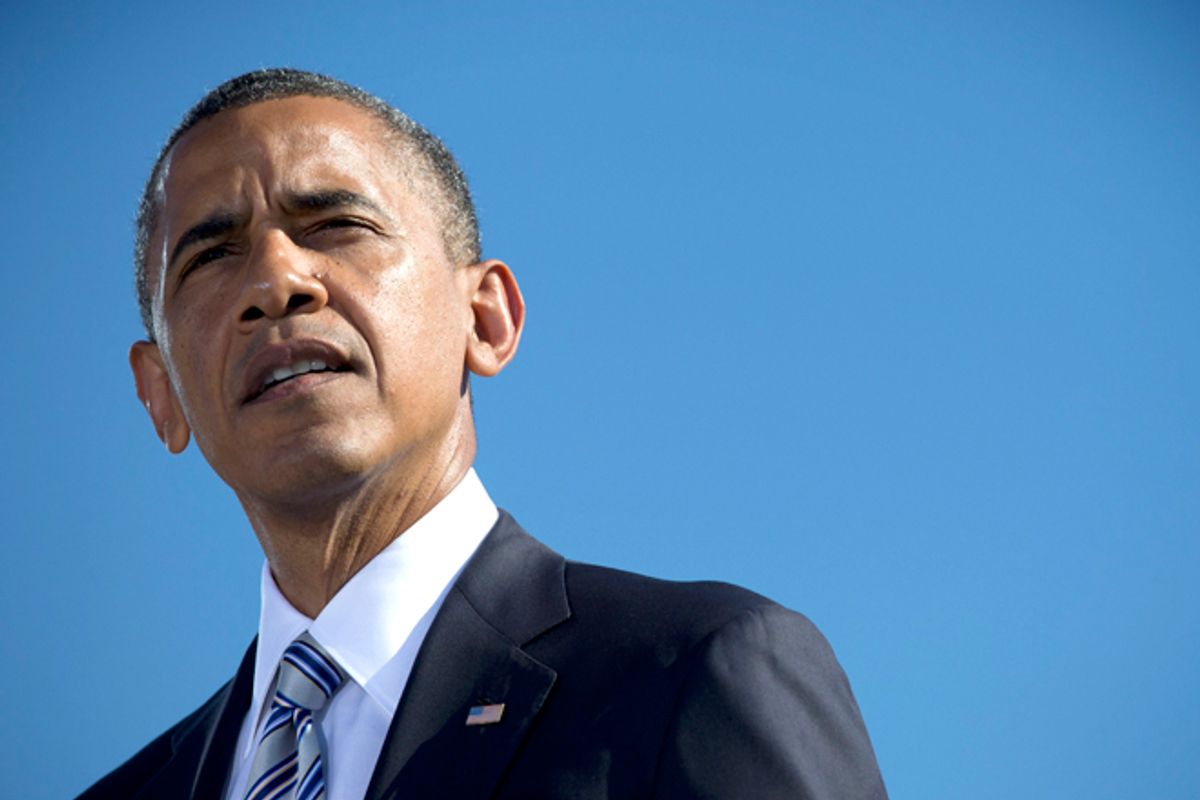 What would a second Barack Obama term look like? There are way too many variables to answer the question with any confidence. His conservative enemies have their terrifying visions: He'd go full-on New Black Panther Party, basically. (Or else he'd simply spend all his time in a glow of self-satisfaction, appearing on "The View" constantly.) But for liberals and leftists, the idea of a reelected Obama involves a lot of uncertainty. (Though we are also hoping for the secret socialist agenda thing, mostly.)

Will a reelected Obama simply hold down the fort, protecting the domestic achievements of his first term and working to block the excesses of an activist Republican Congress? Or will he be in Grand Bargain legacy-establishing mode, desperate to cut bipartisan deals on as many issues as possible? If his foreign anti-terror campaigns are shown to be inspiring the sorts of attitudes that cause people to become terrorists in the first place will he reconsider his strategy or will we continue to act as though we can kill each terrorist (and only each terrorist) in the world one by one until there aren't any anymore? Will Joe Biden and Hillary Clinton finally switch jobs?

No one has any clue, really. Let's lay out some options and make some predictions anyway.

Cabinet speculation is Washington Parlor Game nonsense, really. Cabinet leaders are glorified White House Mascots, mostly, and Obama barely listens to most of his Cabinet, with some exceptions.

Two of those exceptions, Secretary of State Hillary Clinton and Treasury Secretary Tim Geithner, will be gone in 2013. (A third, Defense Secretary Leon Panetta, will probably stay on.) Clinton could be replaced by John Kerry, or Susan Rice. (Or maybe not Susan Rice after her post-Benghazi attack TV appearances, in which she said the attack was related to protests, and not a planned terrorist attack.) Rice and Kerry are both liberal interventionists, and "multilateralists." They probably would not represent a major break from Hillary Clinton.

As for Treasury secretary, worst-case scenario is probably Erskine Bowles. Let's all hope his name is being "floated" just to please horrible Beltway elites who imagine themselves to be Serious about the deficit. But a Bowles appointment would be a sure sign that we're back in 2011 territory when it comes to austerity fever.

More broadly, while Cabinet officials aren't hugely influential, having competent people who actually care about the mission of the agencies they head in charge of government agencies is one of the better arguments for voting Democratic in presidential elections, because there is a distinct difference in the sorts of political appointees each party makes, unless you truly think Republicans have learned their lesson from Michael Brown and Monica Goodling. Obama may not be in constant contact with his labor secretary, but his labor secretary also isn't an anti-government ideologue sabotaging the mission of the Department of Labor. We can continue to expect competence.

Nate Silver's Senate forecast says the Democrats are very likely to keep a slim majority in the U.S. Senate. No one really does rigorous forecasts of House of Representatives election results, but it's safe to say that it will remain in Republican hands. And it's likely to remain so for a decade, because all the liberals congregate in urban areas and Republicans control the redistricting process across much of the country. So it will be essentially the status quo in Congress, except without a distracting opportunity to make Obama a one-term president. (Though there's always impeachment!)

It could be argued that Obama has "learned his lesson" about dealing with Congress, and Republicans, but he may think that the fever will break after the election, and he might think John Boehner will have an easier time dealing with his nuts following an Obama reelection. Either way, the House will have a lot do with what Obama focuses on (and achieves) in term two.

Big liberal priorities -- pro-union legislation or anything putting a price on carbon emissions -- are almost definitely off the table for the foreseeable future. I'd say immigration reform is pretty unlikely, too, though we might get some even more watered-down version of the Dream Act. At the very least we'll get a bunch of senators promising that they're working really hard on the issue, for months, until everything falls apart completely, probably because one senator gets spooked and blows up the whole deal. (Actually, senators will probably do that on like five different major issues over the next four years -- it is already happening on "the fiscal cliff"!)

Look, we're screwed. Things will probably naturally improve, at this same horrible gruelingly slow pace, but the rich will continue getting richer as the poor continue not getting richer. The president is not going to oversee any sort of massive transfer of wealth or fundamental reform of our current broken and inequitable form of capitalism.

Some economists seem to think that job growth will just sort of happen, any day now, and whichever man wins in November will reap the political benefits of that growth, but things have been sucking for so long now that it would not surprise me if things just continued sucking. (And the job growth we do see will likely be low-wage, insecure and shitty for most, and much more remunerative for the lucky few.) Moody's says the economy will add 12 million jobs over the next four year, and the Congressional Budget Office -- which takes the "fiscal cliff" into account -- says growth will be a more anemic 7 million jobs. The Fed predicts GDP growth coupled with continued high unemployment, which became "normal" alarmingly quickly among official Washington. These are the forecasts no matter who is president, though Romney's policies would almost certainly exacerbate economic inequity.

Housing has been an unmitigated disaster for the administration, and for struggling homeowners, though its policies have generally worked out well for banks. The government-sponsored enterprises have pointedly refused to help homeowners, few people have been aided by government refinancing programs, and millions still face foreclosure.

This year, at least, HARP was changed to make refinancing easier for underwater homeowners. Hopefully the administration will try harder to do more for people than banks in a second term.. The White House is telling people it might fire hated Federal Housing Finance Agency director Edward DeMarco, who is still blocking the GSEs from doing all they can to help homeowners, and replace him with someone who isn't horrible, so that is probably a good sign that they at least "get it."

Mass debt forgiveness, a policy that would fix quite a number of economic problems, probably isn't on the table. More orthodox stimulus might still be possible, though.

Remember the American Jobs Act? Obama hasn't mentioned it in a year. But if the best we can hope for is that a second-term Obama has "learned his lessons" from the first term, we could maybe expect that continued weak jobs numbers would lead to pushing for some of the things in the Jobs Act that were good ideas that never had any hope of passing Congress in a giant bill. Or different, rebranded things that would also spur infrastructure spending and construction and manufacturing job growth. But just about any good stimulative proposal is liable to die on the vine in a GOP House, so I'm not hugely optimistic. (Unless they end up trading stimulus for another Bush tax cuts extension or something.)

Under Obama the tax code has the chance to become either slightly or significantly more progressive. That's kind of a big deal, but recent history suggests caution when predicting a tax increase on rich people.

Before Chuck Schumer wised up, this was the "deal" moderate senators were considering: "Entitlement reform" in exchange for ... lower tax rates on rich people. That is not a good sign! Nor is it a good sign that Schumer's call for entitlement reform in exchange for a return to Clinton-era tax rates only on rich households is considered a wildly extreme left-wing position. Those Bush tax cuts are permanent, and they, along with Samuel Alito and torture and the permanent domestic National Security State, are his legacy.

Barack Obama would be pleased to sign something labeled "grand bargain." That might change if Congress hands him a really shitty deal, instead of the mostly shitty deal everyone expects. Right now, the administration is broadcasting its intention to "play hardball" in negotiations, promising to veto a bill that doesn't restore the top marginal tax rate to its Clinton-era level. Republicans, possibly rightly, believe they can get the president to back off by demonstrating a greater willingness to allow the economy to tank in order to get their way.

I imagine a second term would be much like the first, here. Obama has streamlined and codified an extensive secret global war on people suspected of terrorism. The drone war and targeted killing are the new normal. That is not going away. Guantanamo is almost definitely not closing. We will eventually mostly leave Afghanistan, which will continue to be a horrible nightmare. The ultra-conservative Israeli government will continue to purposefully make the pursuit of any sort of solution to the Palestine-Israel conflict impossible, though maybe Netanyahu will be slightly less of a dick once he can no longer hold out hope that he'll be working with a Republican American president in a few months. Especially if he thinks he can convince Obama to bomb Iran. And let's just hope he can't. The "crippling sanctions" will likely continue, though, fueling Iran's popular resentment of the West and only marginally increasing the chance that its government will agree to stop spinning uranium around.

Going on the "learned his lesson" theory, Obama in a second term would hopefully be much more proactive about nominating judges and demanding that Congress vote on them. His inexplicable quietness on his stalled nominations and his failure to nominate enough judges to fill vacancies in his first term has sort of confused everyone, but the federal bench is a huge part of presidential legacies, as Republicans well know.

Even if he nominates and pushes more judges, Obama is likely to continue appointing older and more moderate nominees than Republican presidents do. And that likely includes the Supreme Court. Unlike Romney, Obama will have very limited chances to fundamentally reshape the partisan divide on the Supreme Court. Scalia will likely attempt to outlast him, and Obama will probably end up replacing one or two liberals with one or two liberals. He might get to replace regular swing voter Anthony Kennedy, but I wouldn't put money on it.

On a domestic front, the White House will probably devote a lot of energy to establishing and implementing some of the major accomplishments of his first term that are still quite fragile, like Dodd-Frank and Obamacare. Neither would survive a Republican presidency intact but the Obama administration would hopefully equip them to last for years, as most major liberal reforms tend to. (Until we all decide to de-reregulate finance again in a couple years.) We may also get minor improvements to both bills, if Congress cooperates. There is clearly still no political downside to attacking the banks, so this is one of the issues where the White House probably has the leverage, if not necessarily the political will, to make things better.