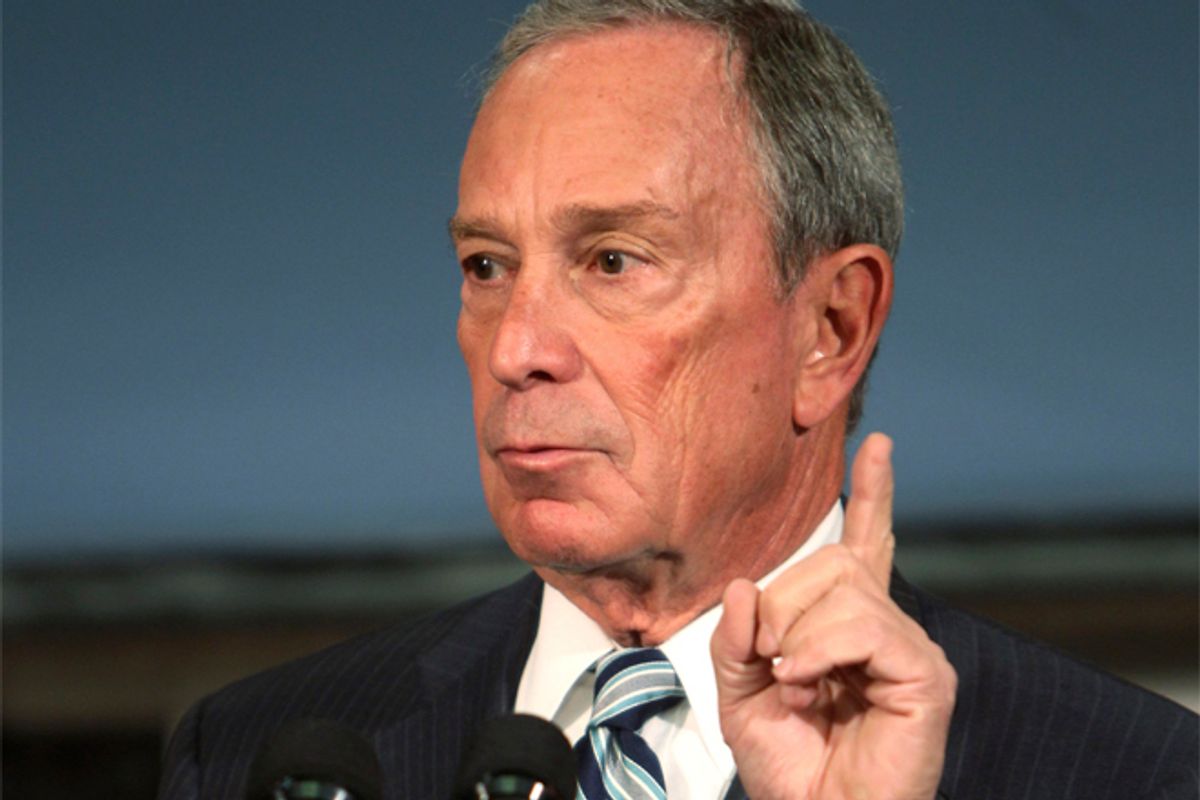 In the wake of the deadly storm that left at least 38 New Yorkers dead, the city's independent Mayor Michael Bloomberg made a surprise endorsement of President Obama today. Although Bloomberg had earlier declared he wasn't endorsing a 2012 candidate and derided both Obama and Mitt Romney for "gibberish," he came out for Obama, he wrote in a piece on Bloomberg.com, because "we need leadership from the White House" on climate change – and he believes Obama has provided it.

While the mayor of New York may not have a lot of pull in the swing states, except maybe Florida, Bloomberg's endorsement matters for several reasons. For one thing, it is more evidence that Sandy is succeeding in raising the political profile of climate change, an issue that had unbelievably been ignored in the 2012 race, by both candidates. "Our climate is changing," Bloomberg declares. "And while the increase in extreme weather we have experienced in New York City and around the world may or may not be the result of it, the risk that it might be -- given this week’s devastation -- should compel all elected leaders to take immediate action."

Second, it's another piece of evidence that establishment figures consider Romney a likely loser. Bloomberg's official endorsement comes on the heels of New Jersey GOP Gov. Chris Christie embracing the president for his handling of the storm.

Also, Bloomberg's backing, just like Christie's warmth, could conceivably swing undecided voters and independents concerned about partisan polarization. Disturbingly, recent polls show that voters believe Romney is more likely to be able to break gridlock in Congress – if only because they haven't seen him try and fail. New Obama ads touting his endorsement by Republican former Secretary of State Colin Powell are likewise aimed at this issue.

So it helps to have support from Bloomberg, the darling of bipartisan and post-partisan dreamers. New York's mayor bashes Obama a little for partisanship, claiming "he devoted little time and effort to developing and sustaining a coalition of centrists" and "engaged in partisan attacks and has embraced a divisive populist agenda focused more on redistributing income than creating it." Bloomberg, of course, ignores the vow by congressional Republicans to not work with Obama. He also gets in a kick at teachers' unions while praising Obama's "Race to the Top" education initiative.

While he praises Romney as "a good man," and says he might have voted for him a decade ago largely because of his business savvy, the mayor says Romney's move to the right during his two presidential runs pushed him away.  “In the past he has taken sensible positions on immigration, illegal guns, abortion rights and health care – but he has reversed course on all of them, and is even running against the very health care model he signed into law in Massachusetts,” Bloomberg writes.

Bloomberg also notes Romney's change of heart on climate change. Though he backed a regional cap-and-trade plan as Massachusetts governor, he has since abandoned it. Obama, meanwhile, "has taken major steps to reduce our carbon consumption, including setting higher fuel-efficiency standards for cars and trucks," the mayor writes. "His administration also has adopted tighter controls on mercury emissions, which will help to close the dirtiest coal power plants (an effort I have supported through my philanthropy), which are estimated to kill 13,000 Americans a year."

Environmentalists don't think Obama's done nearly enough on climate change -- Al Gore said he had "failed to use the bully pulpit to make the case for bold action on climate change" last year -- but like Bloomberg most feel he's head and shoulders above Romney on the issue. The only silver lining of Sandy may be that more politicians have the courage to make climate change an issue – and that they see political benefit to doing so. New York's ambitious governor, Andrew Cuomo, has paired louder advocacy for action on climate change with his appeals for help with the immediate disaster. He obviously thinks it will help him with a 2016 presidential run, which is likely if Hillary Clinton stays out of the race. This will become a bigger issue if Obama wins a second term.

Bloomberg obviously believes that's likely. It's hard to imagine the mayor backing off his no-endorsement pledge if he expected to have to work with President Romney in January.