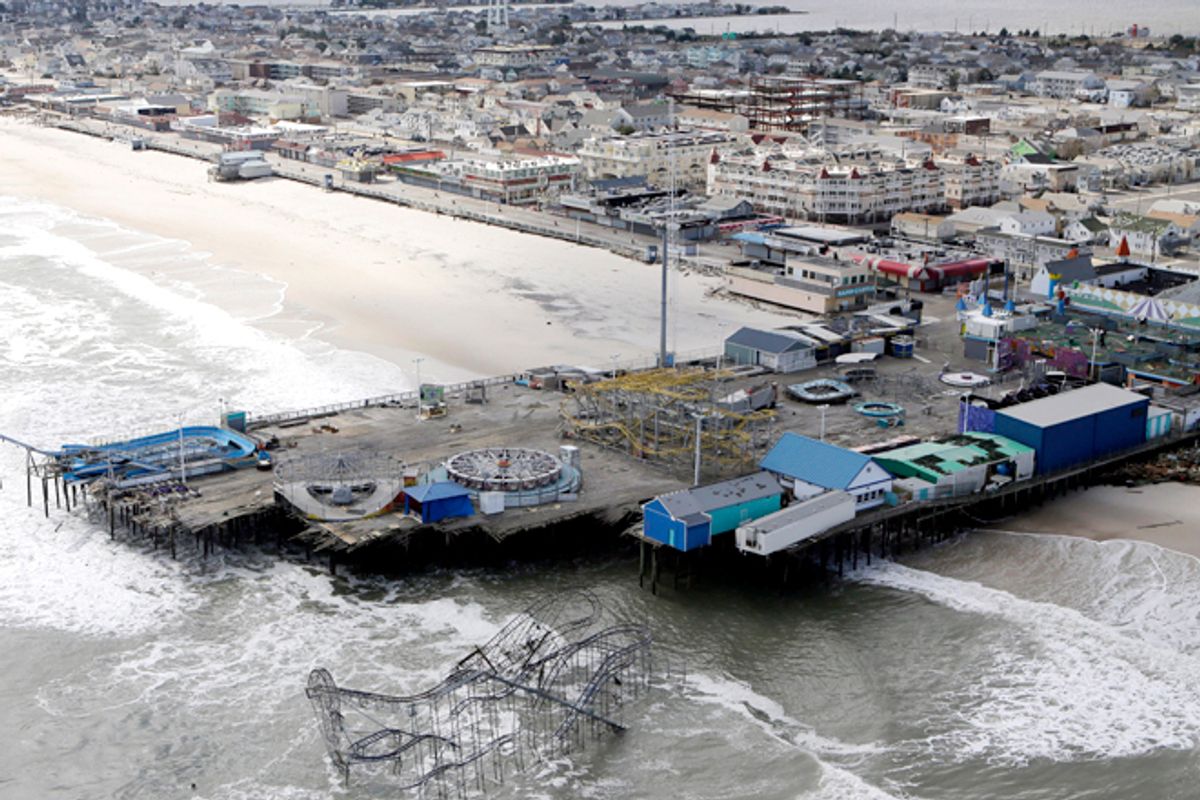 This aerial photo shows the damage to an amusement park left in the wake of superstorm Sandy on Wednesday, Oct. 31, 2012, in Seaside Heights, N.J. (AP/Mike Groll)
--

The chorus is now loud in defense of government. The New York Times even used that forbidden phrase "big government" in its editorial earlier this week. Eduardo Porter, the economics writer for the Times, wrote a column about how the election is a choice between a limited-government candidate and a president who would use government to provide a safety net for the less advantaged. He seemed to side with pro-government philosophy. “Government matters,” wrote the New Republic this week.

The Rediscovering Government Initiative has been dedicated to restoring faith in government through publicizing the best scholarship, clarifying the nation’s true history and countering the prevailing and widely prevalent myths about government. So it is encouraging to see the growing chorus, even if there is a Johnny-come-lately feel to some of it.

Hurricane Sandy is of course stimulating the latest such talk. Mitt Romney had suggested he’d cut back FEMA, the Federal Emergency Management Agency. Has there ever been a stronger case for FEMA? Everyone has taken notice, it seems. Governor Christie of New Jersey was beside himself praising President Obama for his quick response. FEMA is Obama’s main conduit for rescue. The state, clobbered by Sandy, will not be able to handle its recovery alone — not even close.

Yet ideology runs so deep among the Right that absurdist claims continue to be made, now about how we really don’t need all that FEMA. The New York Times ran a "Room for Debate" this week with the theme, “Do We Really Need FEMA?” An “entrepreneuriship” scholar, Russell S. Sobel of the Citadel, writes that “centuries of economics research suggests” that central planning is doomed. Centuries? Really? Adam Smith was well aware of the need for government (although he did not do research in any modern sense).

A Cornell professor argues that the federal government should only fill in when states can’t do the job. Well, sure. And he goes on to say that hurricane damage is localized and requires a street-by-street response, which the federal government cannot assist in. Is experience helping dig out from other hurricanes useful to states? Is the money? The truth is, 9/11 was also localized. Does this man have any idea the extent — the sheer breadth — of the problems caused by Sandy, not to mention the cost? And further, mustn’t New York and New Jersey coordinate?

The saddest, or sadly funniest, attack on FEMA was offered by James Pethokoukis of the American Enterprise Institute. He compares FEMA’s poor performance to Wal-Mart’s ability to get back on its feet during Hurricane Katrina. Never mind how much smaller a task it is to get Wal-Mart working again. FEMA was overseen by George Bush, who put in a totally incompetent political crony to run it. Bush’s carelessness is now legendary.

Pethokoukis also cites what is now an old conservative cliché that these are local problems. On those terms, what isn’t local? Old people’s healthcare? Local unemployment? Do these people have any idea the extent of damage and the need to share costs, expertise and responsibility?

One more word about criticizing FEMA under Bush. Ever since Ronald Reagan, the Right has appointed regulators who don’t take their jobs seriously, want to cut back the powers of their agencies and want a smaller government. There is no better way to make government ineffective than to appoint people who want to undermine it. This undermining of Washington has added fuel to the fire of anti-government ideology. Such ideologically-based incompetence swept across agencies from the FCC, FDA and OSHA to most of the financial and anti-trust regulators. It led to the crisis of 2008. Under Obama, some of that has been corrected.

Government is hardly immune to criticism. But the anti-government campaign reaches ever-greater heights of sheer silliness, so determined are its proponents to make their blindly angry and highly ideological case.