Vote for a party, not a politician

Advice for those wondering how, or whether, to vote: Pick a party and stick with it 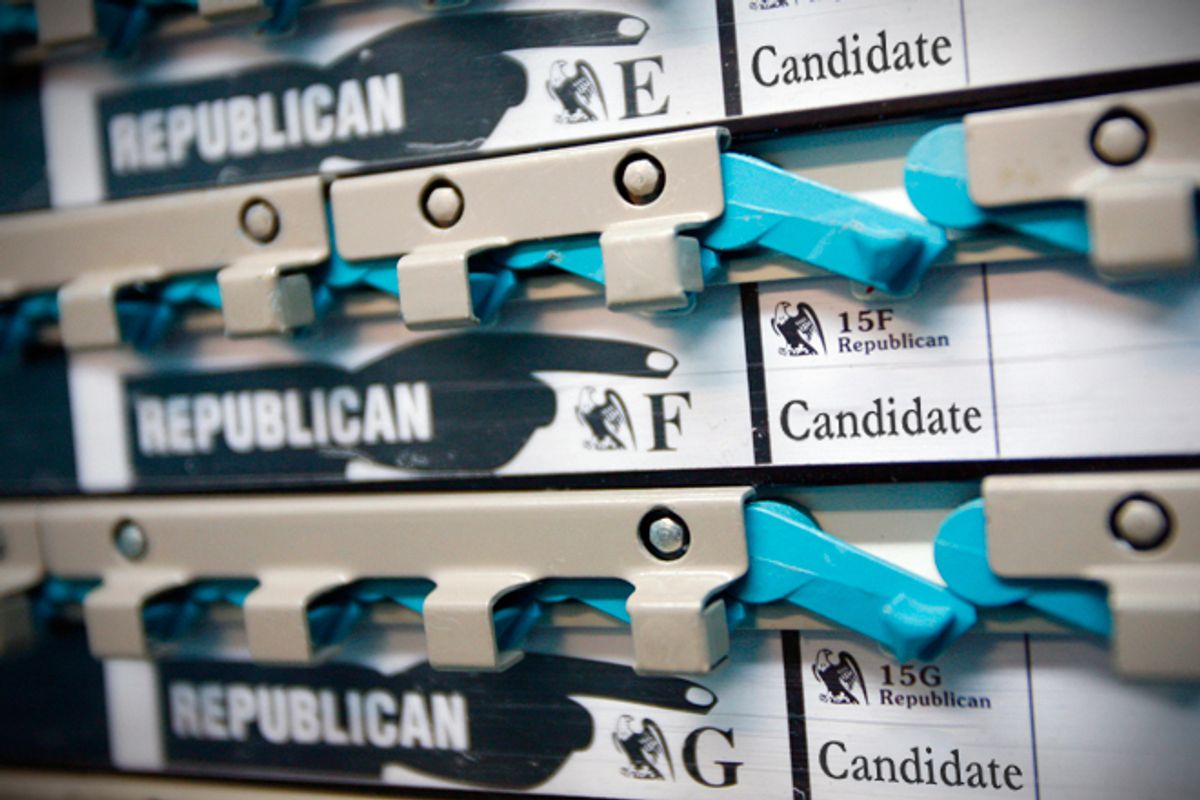 I’ve been reading lots of endorsement columns and editorials, and none of them make any sense to me. They carefully go through various positions on public policy, comparing the two candidates; or, in some cases, analyze how they think the candidates’ backgrounds will affect the way they’ll act if they’re in the White House.

I think public policy is extremely important, and I do believe that a president’s skills, interests and personality can affect his or her success in office. Yet I think that’s the wrong way to go about making this sort of choice.

On Tuesday, I'll be voting for … the candidate nominated by my party.

Indeed, that’s my strong advice to everyone: figure out which party you would prefer to see in the White House, and vote for that candidate, and every other candidate nominated by that party. Doesn't matter who the particular candidates are, what you think of them as people, or as politicians, or anything else. Pick a party and stick with it. That's it.

Given the way U.S. politics works in 2012, one would have to be nuts to do anything else.

Party is simply a much better indicator of public policy for an incoming president than anything else. That’s in part because of the commitments that politicians make. However, it’s more than that; if it were only about positions, one could track the promises they make to get there. It’s also about groups.

Americans often like to believe that individuals are all on their own, but in fact when it comes to politics we usually act, and unless we have unusual resources only act effectively, as part of groups. Those groups tend to be affiliated with one or the other of our major political parties. And those parties, and the politicians that they elect, know it – and so elected officials tend to be especially responsive to the groups within their electoral coalition. So, for example, knowing that Barack Obama was a Democrat and that as organized groups gays and lesbians are aligned with the Democrats turned out to be a far better predicter of Obama’s position on marriage than, for example, what he actually said on the campaign trail in 2008.

This works with self-interested policy; that is, when politicians make decisions with distributional consequences, they’re more likely to help groups within their coalition than those outside it. Or, to be blunt, tax policy under Republicans is very likely to favor the Republican-voting rich while tax policy under the Democrats is likely, at least comparatively, to favor those who are not wealthy. It also works, however, with other kinds of policies. That points to a sort of strange situation in which party serves not only as a shortcut for figuring out what politicians would support one’s issues, but also as a perfectly rational shortcut for figuring out what one believes on the issues in the first place. That is: If I identify with a group, I’m likely (although not certain) to wind up with group members on any relevant public policy question. Politicians supported by that group will also try to take that position. So if I only know what my party’s presidential candidate believes about an issue that I haven’t paid attention to, the odds are actually pretty good that if I did research on the issue I would wind up coming to the same conclusion. Of course, that’s not guaranteed for any number of reasons, but it actually works pretty well.

(In the real world, things get even more complicated; we often can’t tell whether we support a policy position because we have independently reached that conclusion or because we are influenced by “our” team.)

Are there exceptions? Only in extreme cases, in my view. When members of outside fringe parties raid the ballot and somehow manage to win a major party nomination, there’s no reason to vote for them. If the party’s candidate deviates from the normal party positions in some highly unusual and highly offensive way, then party loyalty may not compel a vote.

But in the usual cases, voting the party line will be the best option. Think that makes the vote seem almost meaningless? You’re right: Voting never is enough. Which is the other reason to join, and be loyal to, a political party. By doing so, one can be ready to really work for change in the political system by working for change within the party. Granted, straight-ticket voting isn’t technically necessary for one to become involved in party affairs, but it fits the general idea of how to go about being an effective political actor.

So on Tuesday, I’ll be voting for my party’s candidate for president. Indeed: I’ll be pressing the magic button, which in Texas, where I vote, allows me to automatically vote a straight ticket. And I’d advise everyone that when it comes to voting, forget about issues, or candidates or anything else, and do exactly the same.