Geek love: How a fantasy hater fell in love with J.R.R. Tolkien 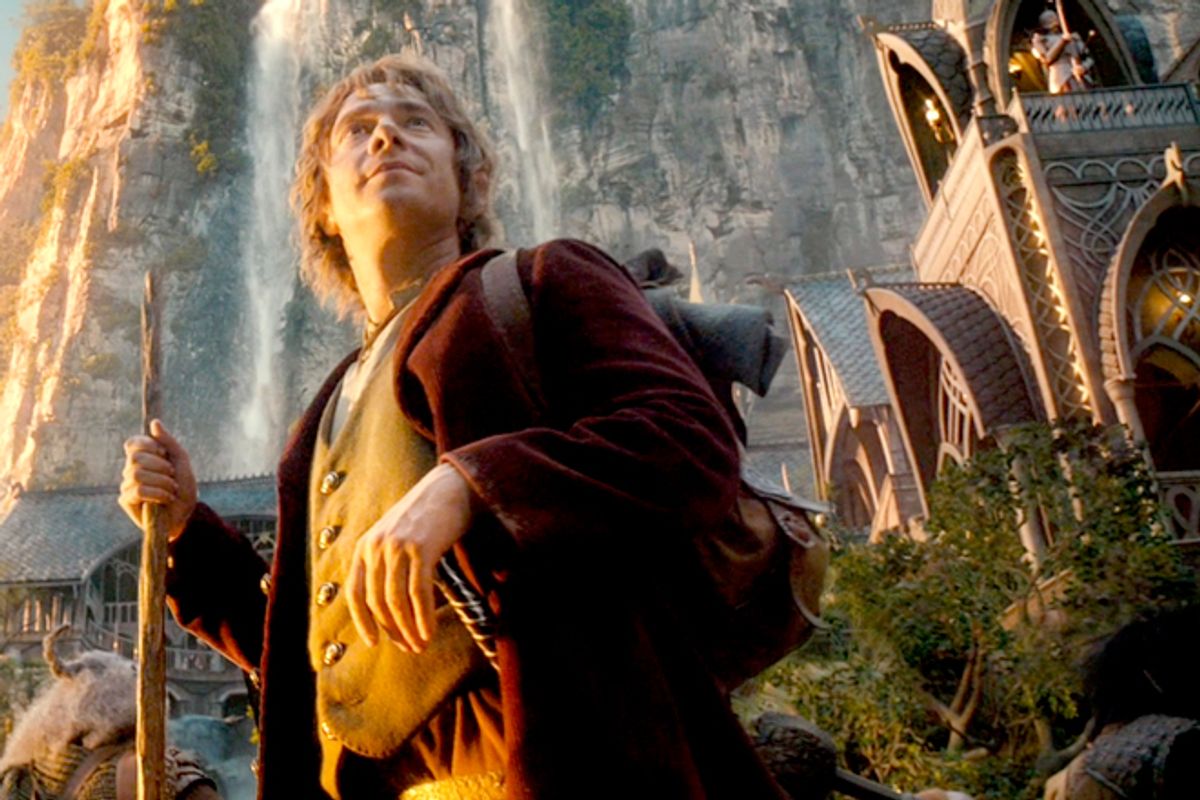 I’m not generally comfortable with the kind of grown man who embraces the word “geek” as a self-identifier because most of those who do so seem to be making an active attempt to forestall adulthood by barricading its way with sky-high piles of endlessly replicating, increasingly self-referential, post-juvenile pop-culture junk. But when the trailer for "The Hobbit" first appeared nearly a year before the film’s Dec. 14 release (which is just plain goofy — like marketing on geologic time), it prompted what one Facebook poster termed a collective online “nerdgasm” — and I wasn't immune. And so it must be said that those of us who do manage to move comfortably about in the larger world are evidence that a certain Y-chromosome tendency to gibbering fannishness does in fact exist, and many of us have points of contact with this phenomenon that we tend to coddle and then feel guilty about it later.

And some of us wonder why.

I first read the "Lord of the Rings" trilogy in college, in a four-day heat during which I first stopped going to class, then stopped eating and then stopped sleeping until I finished it. It profoundly reordered my brain and sent me off on a decade-long pursuit of anything that seemed remotely similar — which the good-old American marketplace was only too happy to supply in quantity: tidal waves of rubbishy wizards and elves and dragons and swords crested against my helpless psyche, and I nearly choked on rank, stagnant rip-offs until at some point in my early thirties I spat out the whole lot of it, wiped my mouth clean and swore NEVER AGAIN.

Compelled by the first film in Peter Jackson’s adaptation, I reread the "Rings" trilogy several years ago, and I was amazed to find myself as deeply enmeshed, as deeply invested, as I had been at 18. I didn’t see how this could be possible. I’d long since settled into a frosty disdain for “fantasy” and its tired, tin-eared tropes; my appetite for the exotic was far more happily fed by stories set in real-world settings: ancient Rome, medieval Japan, imperial Russia, Civil War America.

So how was it that the "Rings" was hooking me? After a very great deal of intensive reflection (navel-gazing, if you absolutely insist), I realized that the trilogy’s great appeal to me was the way in which it captured, and celebrated, the phenomenon of Englishness.

Like most Americans, I have a complex relationship with the empire from which our own polity spun off — the parent, as it were, against whom we rebelled and from whom we moved far away and got our own apartment, never to return. Americans have long cherished our highly distinctive national character, but while we may enjoy pretending that we’re our own self-creation, we can’t escape the fact that we speak English, our laws are based on English precedents and our folklore is populated as much by quintessentially English personae (Robin Hood, Lady Godiva, Henry VIII) as it is by our homegrown equivalents.

Which is a long way of saying we’re all of us a little bit English, and we have a corresponding desire — even a need — to nourish that part of ourselves. Literature is the most obvious place to go for this, and yet oddly the least satisfying. The great pantheon of English writers — Chaucer, Shakespeare, Milton, Defoe, Jane Austen and Dickens — give us not the experience of genuine Englishness but rather a highly specific guided tour of their own moral and cultural universes. Each of them fails by reason of his genius (while, of course, succeeding immortally on other levels).

The wonderful paradox is that it took an Oxford don writing about a world that doesn’t exist, which is filled with strange races and monstrous creatures and so riven by magic that the laws of physics seem not to exist, to succeed in distilling the pure essence of Englishness. And I don’t mean Britishness — that’s something entirely different. I mean Englishness: homey, warm, and high-spirited — principled yet plucky, devout yet bawdy; a study in contrasts, but none so very stark. "The Lord of the Rings" glorifies these traits and, in fact, sets them up as the sole hope for an entire world’s survival. What’s thrilling about it is that ultimately a monolithic, corrosive, expansionist evil is defeated by a few representatives of a people who love singing and dancing, drink and tobacco, and very little else. It’s the triumph of genial anarchy over totalitarian order; it resonated in J.R.R. Tolkien’s time (that of the second World War), and it hasn’t stopped resonating since.

This unexpected Englishness isn’t an accident. Tolkien is explicit about his debt to the bardic yarns of the Anglo-Saxons, their epic songs and fables, the rhythms of their idiosyncratic tongue. He’s able to distill Englishness because he’s dismantled it, gone back to first principles and rebuilt it from scratch, guided this time by his own sensibility — his love of story, of invention, of myth. Thus, Middle Earth has an integrity, a verisimilitude, a realness that no other invented fantasy realm can claim. (The single exception would be that of of Mervyn Peake’s "Gormenghast" — another archetypally English creation, and yet so radically different from Tolkien’s in every particular that there are virtually no points of intersection. Which is perhaps why it alone stands toe-to-toe with the "Rings" as capital "L" literature, invoking, interestingly, Britishness as effectively as the other does Englishness.)

I’m not certain whether the pastoral England that inspired Tolkien exists anymore; it might be simply a state of mind, as the Old West has become for Americans. (We still revere the cowboy ideal, in a country now actively hostile to genuine cowboys.) But it remains a potent cultural touchstone, maybe more potent than ever.

And a universal one, too. How else to explain what is possibly a greater paradox: that a New Zealander film director, an American film studio, and a cast of actors representing a half-dozen other nationalities, cultures and traditions could come together and not only accurately convey Tolkien’s Englishness, its precise tone and textures, but improve on it? It’s heresy to say so, I know, but there it is.

So yes, I dipped back into that "Hobbit" trailer over the past year, and I will continue to do so until the film’s premiere. And each time the dwarves start singing of the Misty Mountains, I feel the call of something closer to the infinite than I’m accustomed to encountering in the usual megaplex crapfest.

Feel free to call me whatever name you like. For once, this nerd/geek/fanboy won’t object.