The attacks on Romney that didn't land

Where are his tax returns, again? And more. . . 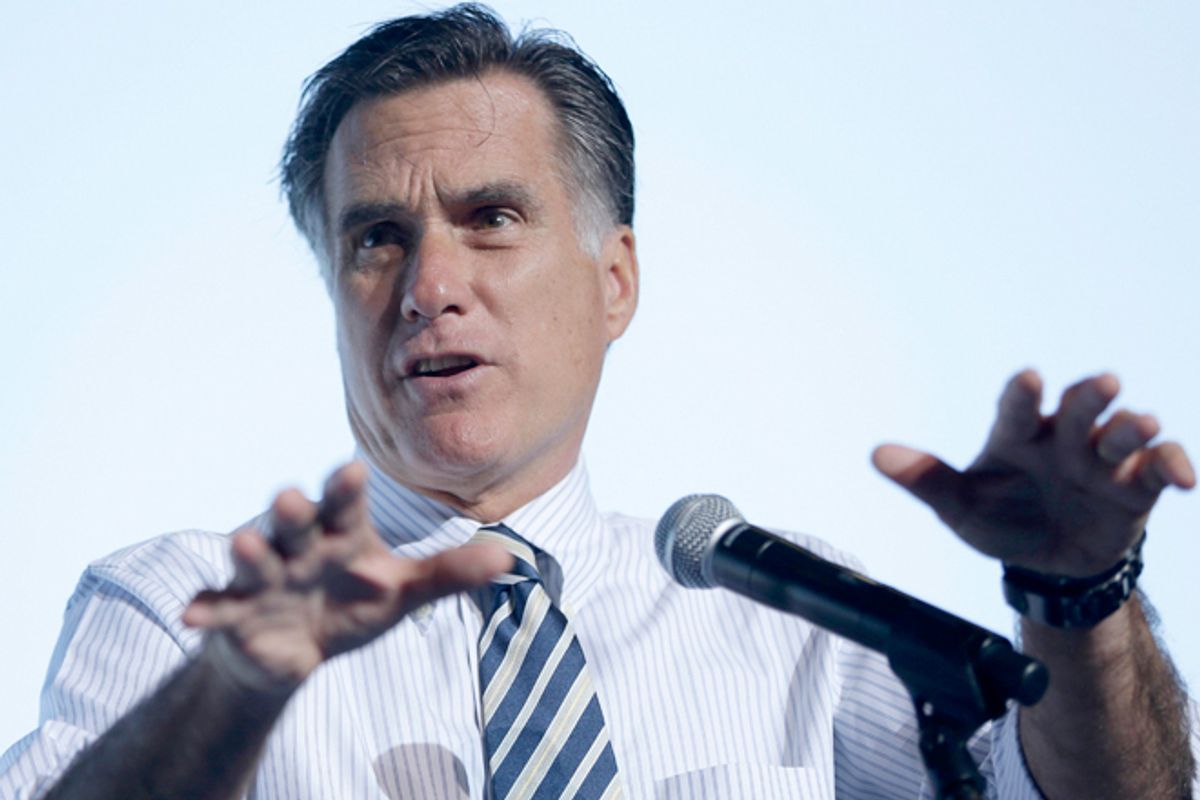 Mitt Romney was never the most opposition research target-rich candidate for the Republican presidential nomination -- miss you, Newt -- with his cheerful moral rectitude and clean living. But there was plenty of material in his charmed life. And the press and the Obama campaign exploited some of it quite effectively, helpfully introducing Americans to Bain Capital and the practice of leveraged buyouts.

But Romney had some rather glaring weaknesses as a candidate that weren't successfully exploited. For an unprincipled flip-flopping weirdo plutocrat with no ability to connect with normal humans, he's polling quite decently! Here are some of the Romney attacks that for whatever reason, never quite connected.

(You know how conservatives still bitterly/crazily claim that Obama wasn't properly vetted? This is sort of like that, except my "things that weren't vetted" are based in reality and not insane conspiracy theories.)

It is genuinely shocking that Romney wasn't forced to release more than his two most recent tax returns. I basically agree with Alec MacGillis: It represents a tremendous failure by the campaign press. Obviously if he was determined not to release them -- and he clearly wasn't -- then no amount of media pressure could have convinced him otherwise. But by and large the press got bored with the story once it got old, and once Romney finally released two unilluminating returns. They stopped asking and stopped mentioning that he was refusing.

The result is, we actually know next to nothing about Mitt Romney's finances. He says he's worth around $250 million. He might be worth much, much more than that. (Only political candidates round down when lying about their net worth.) Considering that a disproportionate amount of the campaign was taken up with a repetitive argument over tax policy -- tax policy was basically all they talked about at the legendary first debate -- it is sort of disappointing that we didn't get a useful object lesson in how one very rich guy abuses the current tax code to pay much, much less than normal people.

This one doesn't quite count as a missed attack. Obama's regular refrain is that Mitt Romney will "take us back to the failed policies of the past." It's a line that gets the message across without being too explicit -- without sounding too petty about the whole blaming the other guy thing -- but the fact that Romney is polling above 40% suggests that the point has not been made clearly enough. It's not just that Romney and Bush are members of the same party and hence believe the same things, it that's Romney has surrounded himself with veterans of the disastrous Bush years and his administration would -- by necessity -- be full of familiar faces.

It's bad enough that his foreign policy team is overwhelmingly made up of Bush people, including actual silent film villain John Bolton and horrible Iraq failure Dan Senor, but his top economists are... Bush's top economists. The thing people hated the most about Bush, at the end, was that he broke the economy. (Though Iraq was probably an incredibly close second.)

The Democrats did their best to push the "Bush's third term" message (Bill Clinton especially), but the press utterly failed to make it clear that the Democratic attack was wholly accurate. Maybe he won't govern precisely like Bush, but Romney's braintrust is full of people who failed miserably under the last Republican president. (Like, Dan Senor should not be allowed to have jobs in politics anymore, SORRY.)

Hey, everyone forgot to play it! I actually figured Democrats would be too squeamish to "go after" a candidate's religion and I was very confident that evangelical conservatives would be so devoted to defeating the socialist usurper that they would all decide that Mormons "count" as Christians. (""Barack Obama's the only protestant on the ballot," a black pastor told Dave Weigel. White evangelicals do not agree!)

There has been Andrew Sullivan's recent series of posts on Romney's church's grotesque history of virulent racism, but... Sully doesn't really count as the MSM or the mainstream left or really anything other than Andrew Sullivan, beautiful unique internet flower. The press isn't going to attack a whole religion (besides Islam and sometimes Scientology), so questions about the more unusual tenets and often bizarre history of the nominee's religion were entirely off-limits. (Though the press had no problem with ignorantly swarming on Obama's much more "mainstream" church in 2008. WHERE WAS THE VETTING MSM.) But they could've maybe asked a bit more about the church's political activities.

Mormons don't actually believe things that much "stranger" than regular Christians, but their church is in part a political organization with a very influential and secretive leadership, deserving of much more scrutiny, and Romney was, not long ago, a bishop. (Not a "pastor," as he always says. Mormons don't say "pastor.") More importantly, he was a stake president, a much more exclusive (though still lay) position. But the press had few questions about his time ministering. In fairness that was probably due as much to ignorance among the press of Mormon practices and beliefs as it was fear of being seen as persecuting a religious group. But with a slim majority of the nation now embracing same sex marriage, it might've been interesting to hear more about the religious organization that has spent a fortune (in tithes from people like Romney) fighting it.

This one might not count, because Paul Ryan could still be the reason Romney loses Ohio (SHOULDA PICKED THE BORING GUY, BORING GUY), but Romney is probably gonna win Florida and... he shouldn't. The Ryan Plan -- the real one, not the watered down ass-covering second one -- was a radical document, and it was radical because it destroyed one of the most popular government programs in the country. The one all the old people like. Because it keeps them alive.

Ryan's "I'm a wonk, wonky wonky wonk!!!" persona may survive intact or may be permanently damaged, in the event of a Romney loss, by his attachment to a loser. Either way Romney did not actually suffer much damage from his selection of a running mate who should be singularly toxic to the old people who make up the GOP base. But when the objective press merely says, "Democrats claim the Ryan budget will do this," but decline to point out that Democrats are right, it gets a bit frustrating.

WHY DIDN'T ANYBODY EVER BRING UP THAT POOR DOG