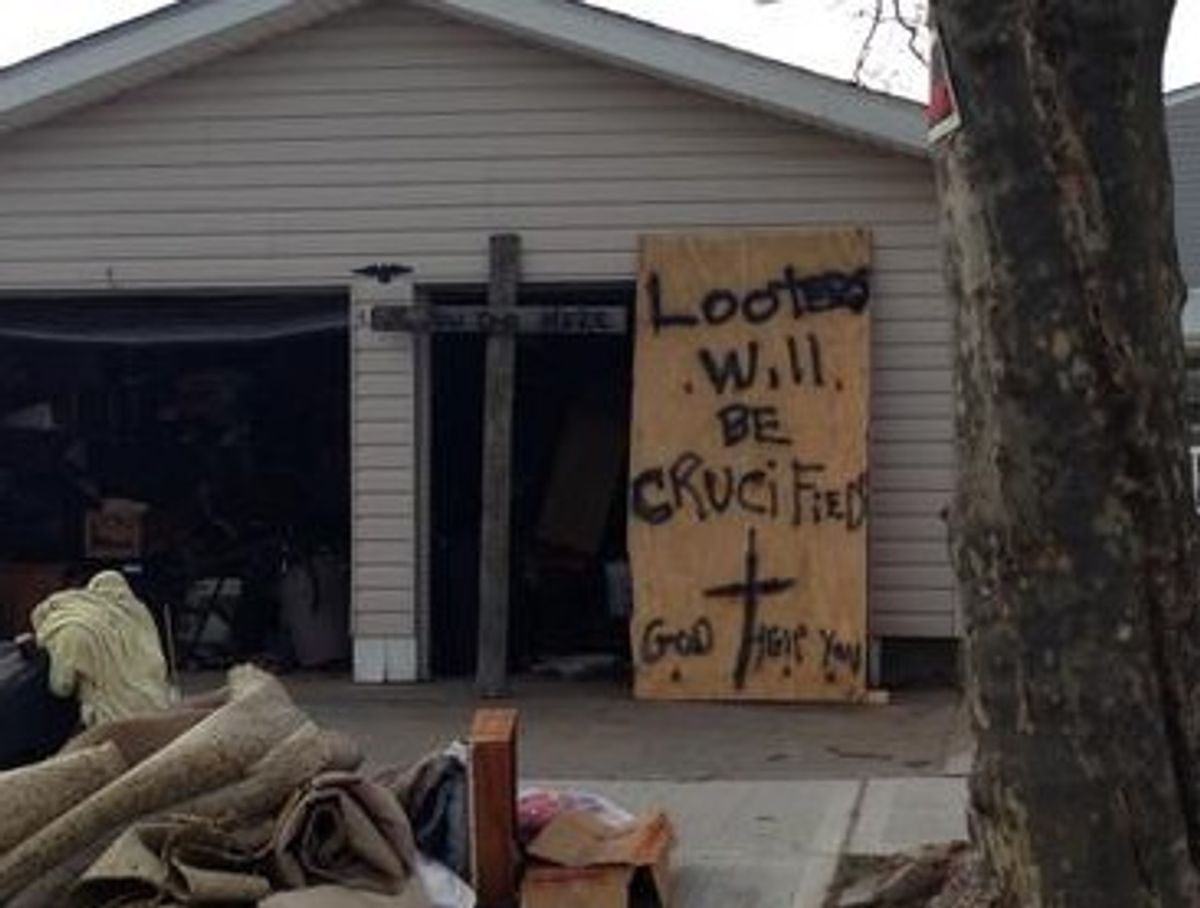 In the chaotic and deadly days that followed Hurricane Katrina, orders that circulated through the New Orleans Police Department sent a chilling message: Private property would be prioritized over human life. "Shoot looters," "Take back the city," "Do what you have to do," were the mandates that led to the deaths of 11 civilians, according to an extensive ProPublica report.

According to the investigation, it remains unclear where the order first originated, but according to ProPublica, "current and former officers said the police orders – taken together with tough talk from top public officials broadcast over the airwaves -- contributed to an atmosphere of confusion about how much force could be used to combat looting."

Seven years later, another devastating hurricane has torn through the U.S., leaving tens of thousands homeless and many more in desperate need of food and basic supplies. "We can't get a bottle of water," a man from New York's battered Rockaway Peninsula shouted at Mayor Michael Bloomberg as the mayor surveyed the wreckage. But after a few scattered reports, the specter of the demon looter has reemerged as fodder for firebrand pundits.

Writing in the New York Post Sunday, Heather Mac Donald -- a vociferous defender of the NYPD's stop-and-frisk program -- used the fact of looting incidents since Sandy to decry all challenges to New York police. "The looting that besmirched New York’s otherwise admirable response to Hurricane Sandy carries a lesson for a trio of federal lawsuits now targeted at the NYPD. Let’s hope that the judge overseeing those suits deigns to take judicial notice," she wrote, suggesting that increased theft statistics over the past week should nullify complaints of racist policing.

Last week in Manhattan, Brooklyn and Staten Island, 20 arrests were made for looting at businesses like supermarkets and sneaker stores. A similar number of arrests have been made for looting in the Rockaways. There have also been reports of thefts in homes evacuated and left empty during the storm. The National Guard have been dispatched throughout New Jersey and New York to help defend properties from looting.

The police presence in Brooklyn's Coney Island has been stepped up and light towers installed. Democratic City Councilwoman Christine Quinn, who is also running for mayor, said, “I would quite frankly say, you know, don’t even give them bail. Make them sit inside until the storm is totally gone and the power is over. That’ll teach you a lesson the next time the power goes out, because this is serious.” (To which political writer Corey Robin responded on his blog, "Good idea. And while we’re at it: how about all Wall Street looters be held without bail until capitalism is over too?")

Needless to say the term "looting" is weighed with moralistic judgment -- it is reserved, as the Post's Mac Donald would have it, for the "loathsome"; in New Orleans, looters did not deserve to live. During the London riots, looters were regularly described as senseless animals;  a six-month prison sentence was doled out to a young person who stole bottled water.

Following reports on the treatment of looters during Katrina, Rebecca Solnit noted that what gets called "looting" is often to her better characterized as "foraging or requisitioning." Instead of joining Solnit in her reframing -- which risks drawing problematic lines between "good looting" and "bad looting"-- I'd simply argue that the demonization of looters has again and again illustrated where priorities lie during disasters (which, in turn, shows where priorities lie all the time). And I'd echo another of Solnit's basic points on the issue: Media frenzy over looting "regularly justifies spending far too much energy and far too many resources on control — the American military calls it 'security' — rather than relief."

The media spin on Sandy's "looters" is not simply reserved for the bile-fueled pages of the New York Post. ABC News headlined a report, "Looters prey on Sandy's hardest hit." The story noted that looting incidents had taken place in some of the city's worst-hit neighborhoods, but failed to consider that looters themselves might be local to these very neighborhoods -- the most likely scenario, given transit outages -- not marauders seeking to worsen tragedy. Indeed, the piece cites an alleged looter who told the New York Daily News, while taking a TV from Rent-a-Center in Coney Island, "Look, they've been looting our wallets for too long ... It's about time we start taking this sh— back." The cognitive dissonance is notable: ABC's headline says looters prey on storm victims, a looter talks about reappropriating goods from the wealthy.

No doubt, individuals who have had their homes destroyed in the storm and then robbed will feel a doubly sharp sting. But the moralistic outrage with which looting is decried does not reflect concern for these victims -- indeed the victims listed in the ABC story are an Ann Taylor and a Brookstone store; the Post wrote that "scum" stole from a Radio Shack and 99-cent store among other businesses. This sort of frenzied concern for property over people just seven years ago created conditions under which a "shoot looters on site" order could circulate with no clear origin and be followed.