What was Seamus thinking?

Romney's famous dog left paw prints all over this election. Experts tell us what that wild ride was really like 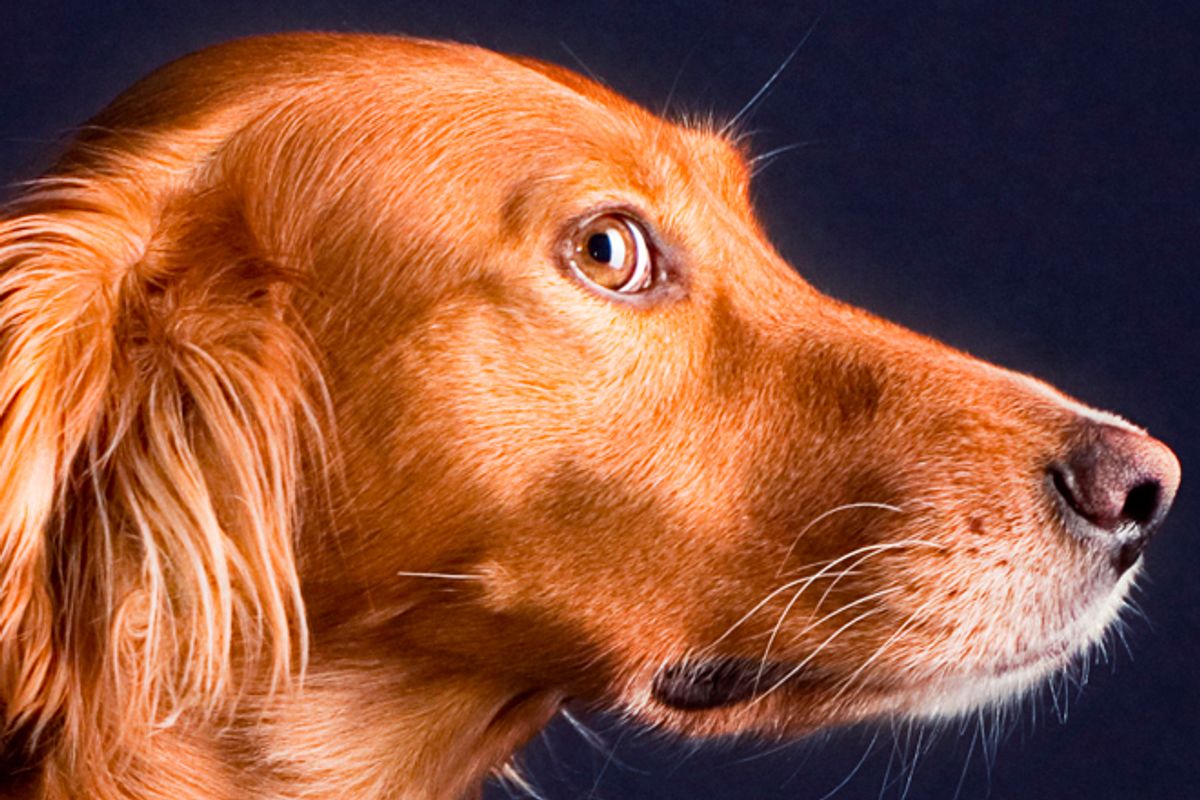 An Irish Setter (not Seamus). (Andrii Muzyka via Shutterstock)
--

If Seamus could only know he'd influence a presidential election by voiding his bowels during that 12-hour, 1983 trip to Canada in a crate strapped to the roof of the Romney family station wagon, what would he think?

The Romney family Irish Setter entered political lore in 2007, when the Boston Globe coolly recounted his ordeal to highlight Mitt Romney’s response (pulling over at a gas station and hosing down car and dog), illustrating the candidate’s unemotional, logical problem-solving. And it was irresistible man-bites-dog stuff. Gail Collins’ legendary references to the incident totaled more than 75 as of Saturday. David Letterman had a field day. The Animal Legal Defense Fund created an infographic that documents all the animal welfare laws Romney appeared to break during the road trip. A major polling firm studied the public reaction to Romney over the incident (not good). Devo recorded a song.

But lost somewhere along the way was Seamus himself. He apparently was a handful, often winding up in the pound after running away from the Romney home (hmmm ...), and he was eventually dispatched to the California farm of Romney’s sister, Jane, who reported that he lived to a “ripe old age.” The Romneys have claimed Seamus liked the crate, and Mitt Romney has felt the need to reiterate on the stump: “We love our family pets.” Ann Romney criticized the media for overblowing the event (though without challenging details in the Globe report).

Could the Romneys be right? Could Seamus have enjoyed his perch like any dog sticking his head out the window of a moving car? I confess to assuming, like many, that Seamus faced a very unique sort of hell up on that roof. About the same time of the Boston Globe report, a haunting graphic novel called “Laika” by Nick Abadzi came out out that recounted the short life of Russia’s famous space dog, and imagined a sort of existential torture for her, sent into orbit face first, staring out through her portal searching for a friendly human face that would never emerge from the relentless blackness. Different dogs, different outcomes, but they fused together in my mind.

But what do I know? So before Seamus disappears forever into the abyss of political arcania, I reached out to the people I thought could make the best-educated guesses about what Seamus might have been thinking during his famous ride. Here are their thoughts:

Alexandra Horowitz, author of “Inside of a Dog: What Dogs See, Smell, and Know.” She teaches psychology, animal behavior and canine cognition at Barnard College, Columbia University.

What might this experience have been like for Seamus? Best estimation: highly stressful and uncomfortable. He would have been in discomfort physically, potentially subject to wind forces painful to the body (unless hermetically sealed), and definitely exposed to high-pitched whistling painful to canid ears. Being trapped in a small space, helpless to escape or communicate with anyone, is a stressor. Dogs' emotional range, based simply on their neurology, unquestionably includes fear and anxiety: uncontrollable, stressful situations are exactly what provokes those emotions.

The fact that the dog shat involuntarily is further indication that he was in extremis. Dogs are social creatures who rely on others, so the fact that no familiar person was available to comfort him -- indeed, all that they did, according to the story the Romneys told, was clean up the "mess" and proceed -- would have been additionally anxiety provoking.

Dogs put up with a lot from humans. In fact, they were probably selected for their tolerance for situations that are uncomfortable and boring at best and painful and frightening at worst. So a dog's ability to live through one of these contexts reflects this adaptability; but it is no indication that the dog "likes" it.

We don't know what any dog is thinking (and especially one strapped to the car and unobserved by anyone). (Nor do we know what's in the mind of those last five undecided voters.) Their behavior, and their physiology, give a pretty sound guess at their experience, however.

Elizabeth Marshall Thomas, author of "The Hidden Life of Dogs,” among many others, including her most recent, "The Harmless People."

I’m sure the dog was frightened and unhappy, with little or no idea of what was happening. It’s a dreadful thing to do to a dog but the dog survived it and might have been OK. The event says more about Romney than about the dog.

Julie Hecht, founder of dogspies.com, and a lecturer on dog science who provides private ethological consultations.

The first thing to put out there: There is not one universal way to characterize what this type of experience would be like for a dog. Each dog’s unique personality will affect their interpretation of and reactions to the various stimuli they confront.

What I can say is that long-distance travel, confinement and social isolation are not to be taken lightly, and Seamus’ experience is characterized by all three.

Behavioral and physiological measures reveal that travel and confinement can be stressful for dogs. Nowadays, veterinary behaviorists and certified applied animal behaviorists consider a dog’s personality and behavior when counseling owners on preparing dogs for travel. Depending on the needs of the dog, recommendations could include teaching dogs to develop positive associations with crates and carriers, and, in some cases, supplying dogs with anti-anxiety medication during travel.

Jeffrey Moussaieff Masson, "When Elephants Weep," "Raising the Peaceable Kingdom," and most recently, "The Cat Who Came in from the Cold."

Well, that is the interesting question, isn't it? And it is a question we always avoid. What does the pig who watches his littermates being slaughtered think? This question was never asked, until very recently, when somebody observed that the pig in question was literally quivering in terror. Of course the piglet knew what was coming and was living out its last few moments in pure fright. Just as would we. So I think it is not unfair to ask what Seamus was feeling.

I think Seamus was feeling exactly what we would feel in this situation: fear that we might not survive; mystification at what brought this about; when would it end? How would it end? What could possibly be done now? Was any help to be had anywhere? I can assure you that Seamus was probably barking his head off: Get me out of here! Help! Help! I can assure you that at no point was Seamus casual about what was happening to him, as evidently Mitt was. I can also be fairly certain that Mitt's kids were as frightened and miserable as Seamus, something else the candidate failed to take into account.

So you may not wish to politicize this, but who can fail to ask the question: If Mitt treats his dog this way, how will he treat us?